Distance – 13.1 miles
Official Time – 1:37:27 (7:26 min/mile pace)
Overall Place – 408 out of 11,394
Gender Place – 346 out of 4,958
Age Group (30-34) Place – 61 out of 678
Race morning started with my typical sweet potato around two and a half hours before the start of the race, which in this case was around 5:00am. I had Jessica tape up my ankle and I was out the door around 5:40am. I picked up my sister-in-law Becca, who was going to finish a full 26.2 mile marathon before the day was over. My race, the half marathon was one that I wasn’t placing a ton of importance on, but I wanted to do well…especially in this race.
We found a spot to park about 5 blocks from the start line and made our way down the streets. I left Becca waiting in line at the port-o-pots so that I could meet up with the local triathlon club before the race for a group photo. I went back to the port-o-pot line, but couldn’t find Becca.
I was in corral B, but since corral A appeared to be about 75% empty, I went ahead joined the faster runners. I glanced down an noticed that my watch was in “biking” mode instead of “running” mode. So after frantically switching it just before the gun went off…it was time to run!
The temperature was around 55° F and I felt great. Joining corral A was a good idea. As we started, I passed a few slower runners then settled into a group going around the same speed by the time we hit the first mile marker. I was running splits in the 7:15-7:20 per mile range for the first 3 miles. I thought about slowing down, but I felt great and decided to see how long I could hold this pace. Miles 4 and 5 were a little slower, but they were still under 7:30 pace, which was my goal pace.

Mile 6 ended up being slower, only because I saw a runner with a 2009 Ironman Louisville hat on and we chatted about Ironman during the whole mile. Once we hit mile 7 and I noticed that the chit-chat had slowed me to a 7:41 pace, I said goodbye and sped up.

Miles 7-8 took us through Churchill Downs, where the Kentucky Derby will be run exactly one week from the day of this race. I held a steady 7:30 pace through Churchill and since I knew if was mostly flat the rest of the way, I decided to see what I had left once we turned back toward downtown.

Mile 9 was a 7:21 mile and once I hit mile marker 10, I started to feel myself wanting to slow. I kept pushing, but my legs were getting fatigued. Miles 10, 11 and 12 were in the 7:33-7:36 range. I could tell that my heart rate, which had been steady all race, was climbing. I reached mile marker 12 and decided to empty the tank and finish strong.

I ran the last 1.1 miles in 7:48 (7:05 mile pace) and finished with an all-out sprint down the stretch (see how I through that horse racing phrase in?). I crossed the finish line and was happy that I had finally turned in a good miniMarathon. The dragon had been slain!

I waited around after I finished and was joined later by my wife, infant son and mother-in-law. They had all come down to see Becca finish her Marathon. As we were waiting, I had the pleasure of watching hundreds of people cross the finish line. This isn’t something that I get to see too often, but I wish it was. The amount of pride and happiness (and some pain) on people’s faces as they are about to accomplish a huge goal is amazing to see. The people from Team Reeve were the ones that really had me fighting back tears. To see these people getting up out of their wheelchairs and walking the last 100 yards to the finish line with walkers, crutches or just the hand of a loved one was amazing to see!

We were all overjoyed to see Becca come around the corner and complete her 26.2 mile journey that had begun nearly six hours earlier. I know the mental and physical battles associated with running a marathon. I’m very proud of Becca and I’m sure that she will remember that moment forever! Here’s a picture of me, Adrian and Becca after the race: 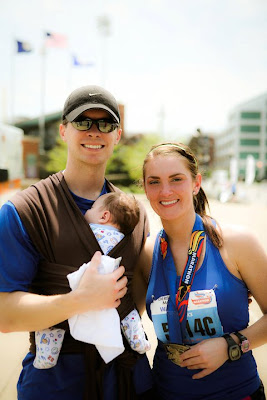