I’ve been battling a stomach virus all week. It hit me Monday afternoon and came in waves all week long. I took Tuesday off thinking a few hours of extra sleep would help me heal up. Feeling a little better, I attempted to continue with my planned workouts on Wednesday and Thursday…neither of which worked out very well. After four days of watching what I was eating and cutting my workouts short, I actually felt worse Thursday night than I had all week. So I decided to hit the sack early and sleep until I didn’t feel tired. My body was fighting this virus and by getting up early and working out and continuing to eat, I wasn’t giving my body a chance to fight. So I skipped yesterday’s workout and worked from home, taking naps throughout the day. I also fasted (with the exception of a piece of toast, a banana and some applesauce) all day.

Good news is that I’m feeling a lot better this morning. Still no workout and I’m limiting what I eat today in hopes of getting in a good workout in the morning. With only a week to go until the Boilerman Triathlon, I need to get back to 100% and have a good week of healthy eating and short, high intensity workouts. It will be interesting to see how I feel once I get back on the bike or try to run. I’ve lost 7 pounds this week and I’m down to 171. Hopefully I can start getting larger amounts of food down in the next few days and get back to 175 or so by next Sunday!

45 minutes on the bike.
The plan was to ride for 30 minutes, do the 45 minute Spin Class, then get in a good swim session. After only a few minutes on the bike, I knew that it wasn’t going to happen. I was very tired and didn’t even have the energy to get me heart rate above 120. Spin Class started and I attempted to keep up, but for the first time ever, I had to bow out and leave only 15 minutes into the class. I took a quick shower and headed into work, feeling defeated. I normally wouldn’t try and workout when feeling like I was Thursday morning, but the two weeks before a race are very important and I wanted to do something. Turns out nothing would have probably been a better idea. Here’s my heart rate chart from the “workout”. As you can see, it was a struggle to even make it into zone 2: 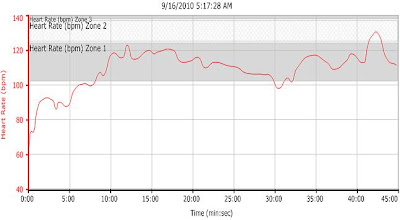