Is there such a thing as a perfect race? I doubt it, but what I managed to put together yesterday was as close as I’ve ever come to achieving one.

I wasn’t too optimistic while loading up the car and leaving the hotel to head towards the race site. It was 52° with a light rain. Here’s some proof: It continued to rain as I drove to the site but then let up once I got to the parking area (which was approximately a mile from the site). I pumped up my tires, loaded my bike on the trailer and climbed on the shuttle bus that was taking athletes to the race. The race was in a remote location with hardly any parking, so they asked everyone to park at a “nearby” high school and ride the shuttle over. It worked out ok for getting athletes back and forth, but not so well for spectators (more and this later).

As usual, I was one of the first people to arrive on site. I had picked up my race packet the day before, so I was able to skip the registration line and head straight to transition. It was an open transition, so I was able to pick out a prime location on the front row, farthest from the swim in and closest to the bike out. This way, I wouldn’t have to run very far with my bike and I would have extra time to get my bearings after coming out of the water. I took my time getting my transition all set up and then took a walk down to the water to see how it felt. The water was pretty comfortable, but the air temperature was still pretty cool, creating a cool-looking fog on the water. I took a picture of it, but it’s hard to see:

I ran into my parents shortly before the race started. They had also parked at the school and taken the shuttle over. Jessica and Kate were supposed to be there as well, but due to the fact that they were not going to run the shuttle during the race, Jessica would not have been able to take Kate back to the hotel for her nap (which would need to happen during the race). Being the excellent Mom that she is, Jessica decided that trying to keep Kate on her normal schedule was the most important thing (which I agree), so she just drove back to the hotel and didn’t get to see any of the race. I hate it that she missed out on the race, which was the main reason she made the trip. I’m not happy about the logistics of having to shuttle people back and forth to the race site. It really threw a wrench into our weekend plans!

Back to the race. The swim was in Rainybrook Bay, a nice little lake just south of Lafayette. The swim started in three waves. Collegiate athletes first, the Open Division Men (that’s me), then Open Division Women. The waves were separated by 5 minutes. I hadn’t had my wetsuit on since the Taylorsville Lake race in May, so it took me a few minutes to climb into it and get it comfortable on my shoulders. The course only had 3 turns, so I felt like my sighting was much improved. Once I got clear from the craziness associated with a mass start, I was able to get into a good groove and saw the first buoy pretty well. Here’s a picture from the swim start: 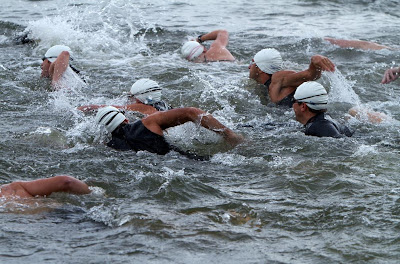 I made the turn around the first buoy and then had trouble finding the second one – which was much further away. I just followed some guys in front of me and kept looking for the yellow buoy. I finally spotted it and started to swim towards it. It was only when I was around 100 feet from it that I realized I was swimming towards a swim marshal sitting in a yellow kayak wearing a yellow life jacket! Once I realized this, I quickly found the actual yellow buoy, which was about 100 feet to the right, and picked up the pace to make up for lost time. I looked down at my watch when I climbed out of the water and saw that it was 27 minutes and some change! Holy crap – that’s fast! This was by far my best swim in a race. I exited the water and started to make the run up to transition, which was about 500 feet away. 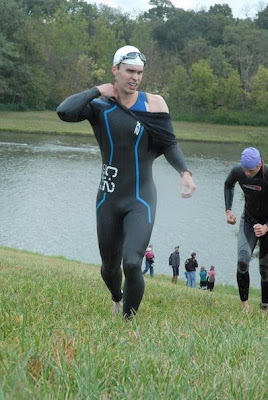 I pealed my wetsuit off as I made the uphill run through the uncut grass. The swim time listed on the results includes this time to run to T1. I got into T1 with my wetsuit around my waist. I headed over to my bike and started to put on my socks before realizing that I still needed to finish taking my wetsuit off! This is what happens when you do lots of races without a wetsuit and then use it again. I got my suit off and was out of T1 in 1 minute 31 seconds.

I knew that it was going to be cool, so I brought gloves. I can ride in cool weather, but my fingers get numb, so gloves are a must. I put my gloves on as I started the ride and settled in. My heart rate was still in the 160’s from pushing it hard on the swim and it took me almost 6 miles to get it to settle down to the low 150’s…where it needed to be. The course was flat. What they call hills, I call speed bumps. After the huge hills I’ve been riding this season, the hills in Indiana are nothing. I only stood up twice just to move around. While there were no hills, there was another obstacle….the wind! I remember it being winding from my time at Purdue, but I never tried to ride a bike in this wind. When heading north-south, the cross winds were rough. But when the course took me west, the wind was right in my face, making a flat road feel like a hill. I was reeling in a lot of the college kids on the bike that had the 5 minute head-start on the swim. I also passed several guys in the open division. I was only passed by one person on the bike and after looking at the results, this ended up being the guy that won my age group. Here’s a picture of me getting as low as I can in my aero position fighting the wind: 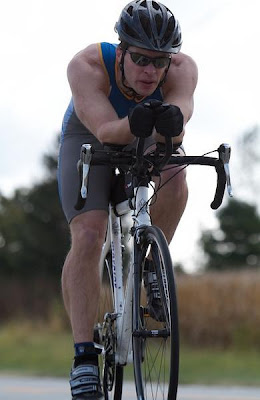 My legs were burning coming into T2, but I was ready to get off the bike – the wind was getting the best of me and I was getting angry. Seriously, I was pissed at the wind. I took my feet out of the shoes while still on the bike heading into T2 and had a lightning quick T2 time of just under 45 seconds. I headed out on the run feeling strong.

My heart rate was in the high 150’s for the first few miles of the run, but I felt like I was pushing it as hard as I could without going too fast. Since there were no mile markers on the course, I really had no idea what kind of pace I was running. I was only passed twice and I passed a few more people. The run took us through a neighborhood with concrete streets – not asphalt – concrete streets. Then it looped back around to Rainybrook Bay for the last 2 miles which consisted of a lap around the lake…which was a combination of a gravel path and running through grassy fields. No doubt that this slowed down the run times some, but it was kind of fun to get off the road and onto a softer surface. I pushed it as hard as I could during the last mile and got my heart rate all the way into the 170’s. I crossed the finish line with a 10K time of 45:51, good enough for third best run time in my age group. The picture below was taken during the last half mile or so. It looks like I’m walking, but trust me – I was running hard. 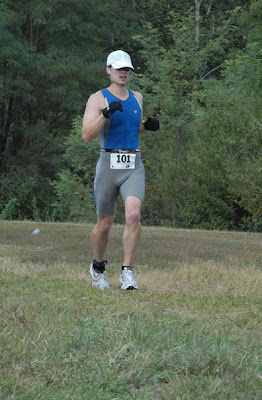 I was even more happy with my overall time of 2:25:11, which is 12 minutes and 17 seconds faster than my best time for an Olympic Distance Triathlon! This time ended up being good enough for a second place finish in my age group and a top 25 overall finish. It was still pretty chilly after the race, so we didn’t stick around to see if I had placed. I’ve emailed the race director to see what the awards are, then I’ll decide if I’m going to try and retrieve my prize!

So I finished off the season with a 3rd place finish and a 2nd place finish. Pretty good way to go into the off-season. I’ve seen huge improvements this year and I’m excited to build on what I have heading into 2011. My focus now turns to my first full marathon, which is on November 6th…less than 5 weeks away!

Here’s the official results of the 2010 Boilerman Triathlon:

Nutrition:
Breakfast – 1 whole wheat beagle (plain) and 1 cup of Greek yogurt – about 3 hours before the race
Pre-race – 18oz. of water with 1 Nathan Catalyst electrolyte tablet (lemon-lime flavor); 1 packet of PowerBar Energy Gel Blasts (strawberry-banana flavor).
During Race – 24oz. of water mixed with Hammer Nutrition Heed (strawberry flavor); 1 Hammer Nutrition Gel (Apple-Cinnamon flavor). I took all of this in on the bike. I took a gel with me on the run, but never felt the need for it. I only managed to drink about 3/4 of the Heed on the bike and took water at 2 aid stations on the run.

As a side note, I beat 44 of the 56 college students that were competing. This race is one of many that college triathlete’s compete in. Several schools showed up with their triathlon teams, including Michigan State, Illinois, Central Michigan, Northwestern, Northern Illinois, Ohio State, and of course, Purdue. I must say that it’s a nice ego boost to beat so many 18 to 21 year olds!