Tomorrow will be my second half-Ironman on the 2011 season. Given the challenging course and the added heat component, topping my race at Taylorsville Lake is going to be tough.

While this race has been in existence for several years, this year marks a change in the venue. The race has moved from Cardinal Harbour (a community located on the Ohio River) to Captain’s Quarters, a restaurant and marina a little further downstream on the river. While Cardinal Harbour offered a flat run course, the 1/4 mile or so walk from the spot where we had to park, to the transition area was not ideal. The new race location offers it’s own challenges (described below), but it will be a much more spectator and participant friendly atmosphere both before and after the race.
As much as I would like to forget about it, I did participate in this race last year. It was a horrible day. If you like to read about other people’s miserable race experiences, click here for my race report.
The 1.2 mile swim will take place in the mighty Ohio River. Will the water be warm? Yes. Somewhere around 80° F…so no wetsuits required (or allowed). Will it be dirty? Yes. It always is…especially the day after it rains…which it did is today.
The swim course will be two loops of 0.6 miles (approximately) each. So we will swim 0.3 miles with the current, turn around, swim 0.3 miles against the current…and then do it all over again. I did last year’s swim in 51:35.9, which is slow. Improving on that should not be a problem. 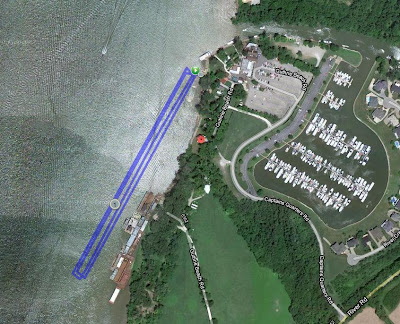 After pulling myself out of the muddy river, I’ll set out on a 56 mile bike ride full of hills. The route takes place on some of the same roads that IMKY will follow, so I know the course fairly well. It’s going to be challenging, but I’ve yet to do a training ride without hills, so I’m ready. Here’s the elevation profile of the bike: 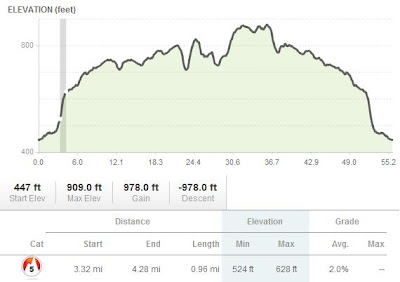 So yeah, there are some big hills. But as much as it sucks going up them, it’s fun to come back down! I did the bike last year in 2:49:44 (unofficial). I would be very happy with a similar time tomorrow.
After the bike is where this race will get very interesting. By this time, the temperatures should be in the upper 80’s and the sun will be beating down. The 13.1 mile run course for this race has been pretty much flat in the past. Now that the race location has changed, it’s no longer flat…in fact, it’s pretty friggin’ hilly! The first mile and a half is straight up a hill. I’m sure that my legs will be loving this after 3 hours on the bike! Then you go down a hill, up another hill, then a long steady descend back to transition. But wait…that’s only 6.5 miles. So let’s just do the whole thing again! Yeppie! Here’s the run course elevation profile: 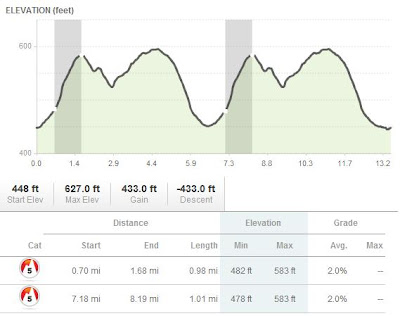 I’ve done a lot of running on hills too, but this will be challenging to say the least. I love challenges though, so I’m ready to spend some time in the pain cave tomorrow! I’ll be happy with a total race time between five and a half and six hours.
Speaking of pain, I had a first this morning. While I was out for my quick brick session, I lost control of my bike going around a curve and did my best baseball slide across the wet pavement. Fortunately I wasn’t going too fast and I only have some minor scrapes and bruises…but I can’t say the same for Flash. She’s at the bike shop as I type this getting a new base bar installed. This was my first wreck in three years of triathlon training and I feel very lucky considering the stories that I’ve heard. Flash and I will both recover and be ready to rock in the morning! 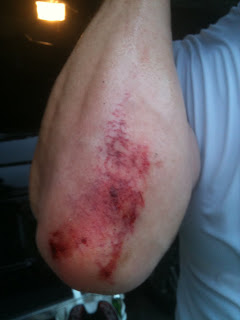 Left a little skin on the road. Yeah, it’s not supposed to bend that way!

One Response to “Cardinal Triathlon Preview”