During the five years I spent pursuing my Mechanical Engineering Degree (so what if some people do it in four years), I had at least one course that focused solely on Fluid Mechanics. I believe that this was a 300 level class that I took sometime during my Junior year…although it’s been 10+ years, so who knows. Without going into too much detail and causing you to stop reading this, I’ll just say that we learned about fluid motion, fluid dynamics and the effect of forces on fluid motion. Fluid dynamics is the study of how objects in motion flow through fluids, such as water.
Figured out where I’m going with this?
When someone swims, they are attempting to move their body through the water. Water is more than 700 times denser than air. If you have ever tried to run in waist deep water, you understand what 700 time feels like. As you swim, you have to try an overcome this force and propel yourself through the water. I used to think that using brute force was the best way to become faster in the water…just muscling through every stroke. Fortunately, I learned this was incorrect before I did any damage to my shoulders.
Streamlining your body is the best way to combat this force and reduce the amount of drag that you are creating. If you’ve ever seen what the water in front of a barge looks like compared to a speed boat, you understand this concept. Reducing the amount of your body’s frontal area that comes into contact with the water is key. I understood this concept for the most part, keeping my head down, hips and legs up, and lead arm extended – but I didn’t take it into account during the most important part of the stroke, the pull (aka the catch).
After seeing some underwater video of myself two weeks ago, I learned (thanks to Coach Manuel from Train Smart) that I extend my arms almost all the way during the pulling phase of my stroke. This means that once my arms enter the water, they stay pretty much straight all the way under the water until I pull them out to start another stroke – this is no good! By extending my arms, I was significantly increasing the amount of frontal area coming into contact with the water. After seeing this in the video, I’ve been trying to train myself to bend my arms at the elbow once I start the pulling phase of my swim. Not only does this reduce drag, it also allows me to use my hand AND forearm to pull through the water – effectively making a larger “paddle”. Doing this also engages my back muscles (lats) instead of my arm muscles (triceps), which are much larger and stronger.
After swimming with my elbows high for five swim workouts, it still feels very unnatural. I’ve been doing lots of drills (swimming with fists closed, paddles and single arm) to try and create some muscle memory. It’s coming along, but I feel slower even though my times are about the same or better. Despite the fact that I’ve only been swimming for three years, it’s hard to change the way I “comfortably” swim. Over time, I’m sure that this change will show up in my speed and efficiency in the water.
Unfortunately (fortunately for me), I don’t have the actual video of me swimming to post here. I did find these two images that show what a good pull should and shouldn’t look like:

Here’s an example of what I was doing – dropping my elbow, making my arm almost straight: 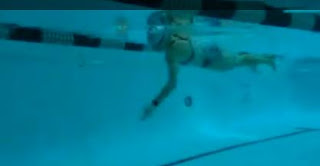 Now here is what a good pull, with a high elbow looks like: 2 Responses to “Combining Engineering and Swimming”