If you missed Part 1 of my race report, you can read it here.
So I left off with me jumping into the river. The 2.4 mile swim course for IMLOU consists of going upstream approximately 0.8 miles, then turning around and going approximately 1.6 miles downstream to the finish.
When I jumped in the water, I immediately started to swim hard. I wanted to get away from everyone else and find some “clean” water. When I say “clean”, I obviously don’t mean the literal sense of the word – this is the Ohio River after all. What I was looking for was a less-crowded spot, where I could get in a good rhythm without constantly being bumped, punched and kicked.
The upstream portion takes you between Towhead Island and the shore. From swimming in this channel before, and thinking back to my Fluids class in Engineering school, I know that the current is slower closest to the banks. So during the first part of the IMLOU swim (when swimming upstream), it would benefit you to hug the edge of the island. I started to head over that way, but as I looked to my left, I saw that it was very crowded over there. So I decided that I would rather fight a little more current and stay by myself.
I was breathing to my right, but every once in a while, I would breath to my left just to see if things had cleared out any over near the island. They never did, so I stayed on my line. The buoys were also to the left, so I was having to look up ahead to sight every 10-15 stokes to make sure I was swimming fairly straight. It’s pretty easy to stay on course in the channel, since it’s only about 25 yards wide.
After what seemed like an hour, I finally reached the turn-around buoy. I made the turn and could almost immediately feel the current assisting me. The turn-around was pretty crowded and I caught a hand to the left eye. It knocked my goggles up on my face, but not enough to force me to stop and adjust them. I did a quick assessment and could tell that there was no water leaking in, so I just left them alone. They weren’t comfortable anymore, but I just blocked it out and kept going.
After I had made the turn, I decided once again to find some clean water. The buoys were on my left again and they seemed to be awful close to the island. So I let everyone else swim on the buoy line and I headed more toward the middle of the river. As I mentioned above, the current is slowest closer to the banks – and conversely, it’s faster in the middle of the river. So now that we were swimming with the current, the middle of the river would provide the most advantage. I extended my stroke length in order to take maximum advantage of this aid from the current.
After swimming for a little bit, I started trying to see the swim exit. I knew that it was at Joe’s Crab Shack, so I began looking for Joe’s roof. After 3-4 attempts, I finally spotted it way up river. My next 2-3 sightings were to try and find which bridge pylons were on that line. The course takes you under two bridges (see picture below), so sighting off of the bridge closest to where I was at the time would be easier than trying to find Joe’s roof each time I looked up. 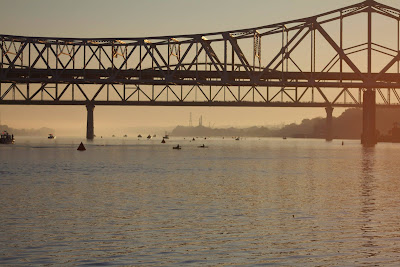 While most people were to my left on the buoy line, I was joined passed by several other swimmers out where I was. I tried to tag on to their feet to get a little bit of a draft, but I could only hang on for a few seconds. At one point, I jumped behind a woman that was only swimming slightly faster than I was. I inadvertently hit her feet a few times and then all of the sudden, she stopped. She seemed to be adjusting her goggles, but then as soon as I went by, she jumped right on MY feet. I could feel her behind me for several minutes. I guess she decided she wasn’t going to let me draft off of her, but she would be more than happy to take advantage of my wake!
Near the end of the swim, I was getting some negative thoughts. I didn’t look at my watch once during the swim. Since I didn’t know how far I had swam, the total time would have been irrelevant. I could have looked at my pace per 100 meters, but I didn’t want to break my rhythm to stop and check it. For some reason, I had the feeling that I was swimming slow. Maybe it was the fact that I was all alone and was getting passed by the only people close to me. Whatever the reason, I was trying to mentally prepare myself for a swim time slower than my goal of a sub 1:20. I was thinking about what a time of 1:25-1:30 would mean for my overall goal of a sub 12 hour race. Due to my bike pacing strategy, I knew that I wasn’t going to make up 10 minutes on the bike, so could I run a marathon in just over 4 hours? These were the thoughts that I allowed to creep into my mind only an hour into the race.
Just before I exited the water, I forced myself to get rid of these negative thoughts and focused on positives. I knew that I still felt really strong and I had completed the swim at a pace that wasn’t going to hurt my bike or run. I started to invision what I needed to do once I reached the transition tent. I mentally went through all the items in my Bike Gear bag and what order I needed to pull everything out in order to make the most efficient use of my time.
I reached the temporary steps and was helped out of the water by a volunteer. I walked a few steps just to make sure I had my legs under me…then I looked down at my watch…1 hour and 9 minutes! I was very releved and excited by this time. It was even almost 3 minutes faster than my time from two years ago – when my swim training my much better. Maybe the current was stronger this year, but I didn’t care – I was pumped!
All of my negative thoughts were gone and I immediately felt great about the way my day was going to go!
2.4 mile swim
1:09:59
1:49 / 100m pace
1:39 / 100yd pace
87th out of 335 in my Age Group
703rd out of 2600 Overall

Part 3 of my race report will take me through T1 and the 112 mile bike course.

Be sure and visit all of my sponsor’s websites. I sought out these companies because they provide great products and services.
Swag’s Sports Shoes
Rudy Ellis Sports Medicine Center
Garden of Life
GreenBEAN Delivery
Meridian Acupuncture and Herbal Medicine
Earth Fare Supermarket