8:18am
The 112 mile bike course starts out fairly flat. It took a few minutes for my watch to pick-up my heart rate monitor strap, but once it did, I saw that my HR was in the low 120’s…perfect. The goal was to keep my HR low during this first flat stretch and not let my speed get out of control. I kept looking down at my bike computer and noticed that I was in the 18-19 mph range. I’ve spent lots of time on my bike over the last year and I pretty much know how fast I’m going at any given point. I was a little surprised by the speed because I felt like I was going a little faster. I didn’t let it bother me and I just held a pace that kept my HR below 140.
8:35am
I had a very precise nutrition plan for the 6 hours I planned on being on the bike. A drink or two of Hammer Perpetuem every 15 minutes, two electrolyte tablets at 20 and 40 past each hour, a gel at 50 past each hour and sips of clear water from my aero bottle every few minutes. So once I had been on the bike around 15 minutes, I reached back and grabbed my bottle of Perpetuem for my first fuel since eating my Shot Blocks over an hour and half earlier. As soon as the liquid hit my stomach I knew I had a problem. If you read Part 1 of this race report, you might remember me mentioning my pre-race routine. Part of this routine was missing the morning of Ironman…and I found it at mile 5 of the bike! I had the sudden urge to find a port-o-pot!
9:25am
Unfortunately for me, the first port-o-pot didn’t make an appearance until KY-1694, which is around mile 24. From the time that I had the urge to “go” until I made it to a place where it’s acceptable to do so, it had been almost an hour! Despite the stomach/intestinal cramps, I stuck to my nutrition plan. I knew that missing fuel at the beginning of the bike would lead to big problems later in the day. I had a volunteer hold my bike while I took care of business. I’d like to think that I was able to do this very quickly, but it still took me around 3-4 minutes…time where the clock was running, but I was sitting still. Once I got this out of the way, my stomach settled back down and didn’t bother me the rest of the ride. 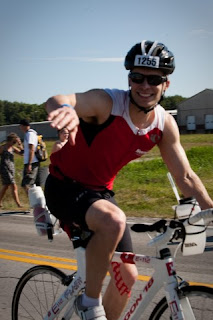 10:15am
I knew that my wife Jessica and daughter were going to be at the intersection of KY-393 and KY-146 in Buckner. I would pass this location twice, once at mile 35 and then again around mile 65. As I came down KY-393, I was looking for the red shirts that we had made for everyone. I saw my brother John first. He didn’t see me until I was about 20 feet away and by the time he told his wife and Jessica that I was there, they barely had time to get their camera’s up and snap a quick picture. They were unaware of the fact that I had started at the front of the line and swam about 10 minutes faster than I had expected. They had planned (because I told them) on my being at this intersection between 10:30 and 10:40am. Good thing they got there early! They stayed around and were able to get some good video and pictures of me on the second loop.
10:20am
After seeing Jessica, John and Kira (my daughter decided to stay with her Mimi), I just settled in and rode. By this point it was obvious to me that my bike computer was not working right. They had mile markers at random places on the course and my bike computer was showing I had gone a few miles less than the signs indicated. Normally I would trust my computer more than the signs, but since I had to reset it that morning, and I didn’t feel like my speed was accurate, I knew it was off. So without my bike computer as a constant check, I had to rely on feel. I have a feeling that I would have pushed it a little more if I had known my average speed was under 19 mph. I was keeping an eye on my HR, but I know that I can keep it below my aerobic threshold of 140 bpm and still average 19 mph on this course. My average HR for the bike ended up being only 122 bpm.
12:15pm
Around mile 66 they had the Special Needs bags. I stopped, grabbed my bag and got to work. I had a volunteer hold my bike while I refilled my bottle with another 3 hours worth of Perpetuem mix, swapped out gel flasks, rubbed some BioFreeze on my knee and stretched my hip flexors. I was still feeling good at this point, but a little preventative maintenance can go a long way. So while this stop added another 5 minutes or so to my time, I still think it was a good idea. 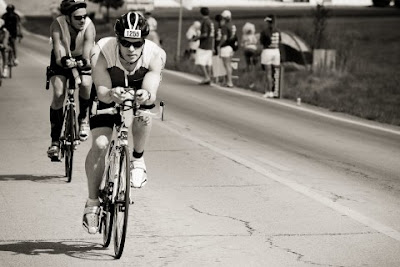 12:45pm
I know this bike course very well. I know the parts that I like, and I know the parts that I hate. The 2-3 miles on Ballard School Road is a stretch that I hate. During the second loop, around mile 75, I found myself at the base of a steep climb…in the wrong gear. I don’t know why I forgot to shift, I knew it was coming. Either way, I knew that climbing this hill in the wrong gear would trash my legs, so I attempted to shift from my big ring to my small ring, while already on the hill. Any experienced rider can probably predict what happened. A nasty noise and then a loss of all tension on the crank…my chain had come off! I quickly unclipped my feet to keep from falling over. I looked down and saw the carnage. At first glance, it looked like I had broken my chain. I instantly got that sinking feeling in the pit of my stomach. I moved my bike over to the left side of the road to asses the damage. Fortunately, the chain was just twisted, not broken. So I very carefully untwisted the chain and fed it back through the ring. I ran through a couple of gears and was very relieved when things seemed to be working correctly. With a mailbox as support, I climbed back on Flash and started my ascent up the hill.
1:10pm
I made the final turn onto US-42 and was headed back towards Louisville. While attacking the last big hill on L’Esprit Road, by quads started to cramp. I knew that my nutrition and hydration was on target (I peed 4 times on the bike), so this was a muscle fatigue issue. My IT Band had also started to hurt a little (which it never had before on the bike). Because of this, I decided to try and stay seated as much as possible during the final 30 miles of the ride. Fortunately, there are not many steep uphill climbs in that stretch. After focusing so much on my knee during T1, I failed to slap some chamois cream on, so by mile 90, by underside was a little sore.
2:20pm
I kept my cadence high during the final 10 miles or so in order to give my legs a rest. As I pulled into T2, I saw that I was a few minutes over the 6 hours that I had hoped for on the bike. The three stops that I made no doubt cost me a good 10 minutes, so I wasn’t too upset at my official bike split of 6:08:01. Ironman breaks the bike into four segments for their athlete tracking. Here’s how I fared on each:
Bike split 1: 23 miles – 1:12:48 – 18.96 mph
Bike split 2: 17 miles (40 total) – 0:55:44 – 18.30 mph – includes port-o-pot stop
Bike split 3: 30.5 miles (70.5 total) – 1:41:26 – 18.04 mph – includes stop for special needs bag
Bike split 4: 41.5 miles (112 total) – 2:18:03 – 18.04 mph – includes stop to fix chain 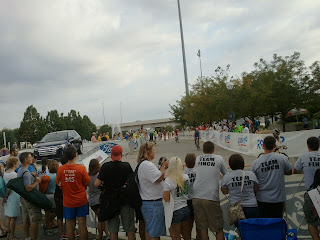 2:25pm
I handed my bike off to the bike catcher and ran down to grab my Run Gear bag. Once in the changing tent, I pulled off my helmet and bike shorts. I put on another pair of tri shorts, my fuel belt, fresh socks and my running shoes. I also took a few minutes to stretch some more, put on another layer of BioFreeze and pop a few Ibuprofen. I also took a dab of the community Vaseline and rubbed it on the bottoms of my feet (blister prevention). My 11+ minute T2 is embarrassingly slow, but once again I felt that any preventative maintenance I could do on my knee before starting the marathon was worth the time.
2:35pm
I headed out of T2 and began the third and final segment of Ironman – a 26.2 mile run!