As I mentioned in Part 3 of my report, I had a nice boost of energy during the last 10 miles of the bike. I pushed out my fastest splits of the 112 miles, all while holding a steady power and having my heart rate actually decrease slightly. I think I know how and why this happened, but I’ll talk about that in a future post.
I rolled into T2 feeling great and ready to take on a marathon. I handed my bike off to a volunteer (I always feel like a pro when I get to do this), ran down the shoot and grabbed by Run Gear bag. There were volunteers getting bags for people, but I guess my number didn’t get called out. It wasn’t a big deal because I knew exactly where my bag was lying on the ground.
I got into the changing tent and switched into my tri shorts. I changed socks, slipped on my running shoes, put on some more Planet Sun sunscreen, put my race number on my belt, threw my hat on, then grabbed my fuel belt and sunglasses as I headed out.
T2
7:43
109th out of 335 in my Age Group
792nd out of 2600 Overall
My strategy on the run was two-fold. Priority number one was to keep my heart rate below 150. I figured that I would be able to hold a 9:30 per mile pace and keep my HR low enough. So that’s what I did. I checked my HR and pace pretty often that first mile. I was feeling strong but was being very mindful to keep from going out too fast. I found myself running next to a guy named Ryan during the second mile. He was from Milwaukee and we were running about the same pace. We chatted about sports and triathlons…it helped pass the time.
Much like the bike aid stations, I had a very specific plan for the run aid stations. I would grab wet sponges at the start of the station. I would start to walk as I unzipped my tri top and stuffed them down close to my core. I would then grab a cup of water and drink it all. I would take a second cup and dump it down my back as I walked. Then I would take a cup of ice, dump the ice in my hat and put my hat back on my head as I exited the aid station and started to run again. This process meant that I would be walking for about 30 seconds each aid station. They were approximately a mile apart, so I was running around a 9:30-9:45 min/mile pace and walking 30 seconds each mile.
I was honestly surprised by how low my heart rate was. It was hovering in the high 120’s. Based on the one long run I did in the heat while training, I fully expected to be watching it climb into the 140’s pretty early into the run. Here’s a chart of my heart rate for the entire 26.2 miles. 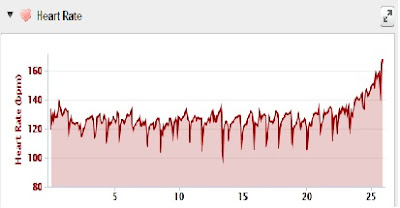 There will be some more posts later disecting the bike and run portions of the race, but this is it for now. I’m very happy with my race and happy that it’s over…no post-Ironman blues for me!
Be sure and visit all of my sponsor’s websites. I sought out these companies because they provide great products and services.
Swag’s Sports Shoes
Rudy Ellis Sports Medicine Center
Garden of Life
GreenBEAN Delivery
Meridian Acupuncture and Herbal Medicine
Earth Fare Supermarket

One Response to “Ironman Louisville Race Report – Part 4 (The Run)”