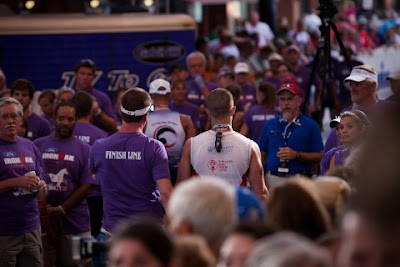 7:10pm
After crossing the line and becoming an Ironman, I was immediately given my finishers medal and a hat and shirt. I was then greeted by a volunteer that asked me how I was feeling (that’s him in the white visor). I don’t remember what I told him, but he decided it would be a good idea to hang out with me for a few minutes. I put my hand on his shoulder and we walked over to have my official finisher’s photo taken. In the video (I’ll post this later), you can see me looking in several directions and giving waves to people as I heard them yelling my name. I don’t remember who I saw…not a clue. I do remember looking for Jessica and then seeing my parents standing to the left just past the finish line. I walked over and gave my Mom and hug. As I stood there talking with them, my legs began to get weak and I was getting a little dizzy. I turned around and my “escort” was standing right next to me. He then suggested that we take a walk down to the Convention Center and get some water and maybe a massage, or maybe stop in and get checked out by the medical team. At that point, I would have walked anywhere that this guy wanted to lead me.
7:15pm
As we were walking down the finish shoot I realized that I had just turned and walked away from my parents, without telling them where I was going. None of my family or friends that had come to the finish line were going to have any idea where I was. I thought about telling my escort that I needed to go back and tell them, but I didn’t have the energy. We walked up to the Convention Center and through the front doors. As we walked past the room where the Medics were, he asked me if I wanted to have them check me out or if I wanted an IV. I took a look at the people sitting there waiting for medical attention and decided that they were worse off than I was. So I declined medical attention and opted for a walk down the hall to the massage room. 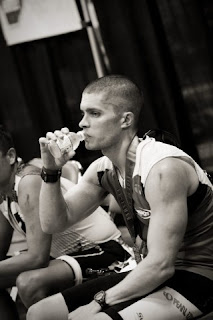 7:25pm
Once I signed in for my massage, my escort left. He was a really nice guy and I wish I could remember what we talked about. As I sat in my chair waiting for my name to be called I started to look around. It looked like Night of the Living Dead in there. People were just sitting there, staring straight ahead…like zombies. I started to chat with the dude sitting next to me. He was from California and flew in to Louisville just for this race. Notice that I’m starting to remember stuff? It was right around this point that I started getting cold chills. Despite being in the mid 80’s and humid outside, I was freezing. This is a sure sign of heat exhaustion. My core body temperature had gotten high enough that sweating was not doing the trick. I sat there for a few minutes shivering, then asked a volunteer for a Mylar blanket. Other than making me look like a superhero, this metallic blanket did a good job of regulating my body temperature. After about 5 minutes, the chills were gone. I took off my shoes and socks to assess the damage. Big blister on the ball of my right foot and my big toe and the guy next to it on both feet were about to lose their toenails. Needless to say that I was walking very gingerly.
7:35pm
Jessica had seen me walking stumbling towards the Convention Center and eventually found me. She took my fuel belt and finishers shirt and hat…which I was sure to leave sitting there. I was really glad to see her and knew that she would tell everyone what was going on.
7:50pm
Finally laying on the table getting my massage. It was nice, but by this time, my muscles were tight and this short massage didn’t do much. My back and legs were aching, I would have needed another 30 minutes on the table to do any good. I really regret sitting there for over half an hour waiting for this massage! I would have much rather been outside with my support crew.

8:00pm
I stumbled out the Convention Center door to be greeted by a round of applause. By my count, I had between 18 and 20 people there to great me. Very humbling. I was really excited to see both of my children there. It was past their bedtimes and we rarely make exceptions in this department. I guess this was a good excuse to keep them up late! I was holding them both when I guy from a local TV station (Wave 3) asked me if I would do an interview…lots of media attention for me these days! Here’s the link to the article that ran in the local paper the day before the race.
8:05pm
As I’m standing there holding my son in one arm and my daughter in the other I was told that there had been a death during the swim portion of the race. The interviewer then asked me what my thoughts on this were. See the picture below for my reaction to this question. I did about a 5 minute interview with the guy, but after contacting the station this week, I was told that the footage didn’t make the air and the video has been trashed. I guess I was too much of a smart-ass for them to air my response. 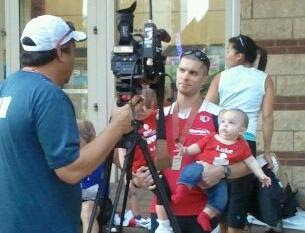 8:10pm
Now it was picture time! Lots of pictures with everyone…I felt like a celebrity. I was feeling much better at this point (an hour after I had finished), and was excited to start sharing my race story with anyone that would listen. As my support crew started to dispurse, I walked Jessica and the kids to her car and gave them a kiss goodnight. I had planned all along to stay at the finish line until midnight, to see the final participants cross the line.
8:40pm
I made my way to a restaurant called Sully’s. It’s located just feet from the finish line and my local triathlon club, the Louisville Landsharks had rented out a sweet spot outside on the patio. By this point I was starting to get hungry, so I ordered up a grilled chicken wrap and fries (yes, I ate fries). I sat around and chatted with one of my training partners, Bill Marks. We had started the day together at the swim start and now almost 14 hours later, we were sharing our race stories.
9:30pm
After I ate, I stood around watching people cross the finish line. It’s a pretty awesome experience. You can see the struggle/relief on people’s faces as accomplish their goal of becoming an Ironman. Every person has a unique story and I would love to hear them all!
10:00pm
I walked over to another restaurant, an Irish pub called Ri Ra. This is where Brendan, Jaime and Tim (remember them from the swim start?) were hanging out. I stumbled in and ordered up an endless glass of water. We did what everyone else was doing and told the successes/failures of the day. They had already looked up my splits online and I spent a few minutes catching some ridicule for my times in T1 & T2. Granted, they were about twice as long as they should have been, but once I explained that I wasn’t taking a nap…actually they still thought it was funny.
11:00pm
We made our way out to the finish shoot to watch the final hour of Ironman Louisville. If you don’t cross the finish line by midnight (17 hours after the race starts), it doesn’t count…so things get pretty exciting at the end of the night. We watched person after person come in. Most of which looked like they had been walking for a while based on the amount of energy they had left. Lots of jumping, skipping, spinning, giving high fives, etc.. As it drew closer to midnight, Mike Reilly came down on to the finish shoot and started to encourage people to finish.
Check out this video that I shot. These are the last people to finish the race, literally seconds before the midnight cut off. Watch Mike Reilly (in the red shirt) run down and convince a guy to continue. He had stopped about 100 feet short of finishing. Listen to the crowd roar once he starts moving again. One word…awesome!

Nutrition plan worked well. Complex carbs early in the race, simple carbs as the race went on. I was well hydrated all day. My stomach started to cramp during the last few miles on the run, but I think this was due to the heat, not inadequate nutrition.