The big race is now less than a week away. I’m going to try and make a post every day this week leading up to Sunday’s Ironman Louisville.
Today I’m going to take a quick look at the professionals that will be joining us amateurs out on the course this year.
While this list is subject to change (pros have the advantage of deciding to do a race last minute), it’s likely that there will not be anyone else racing. 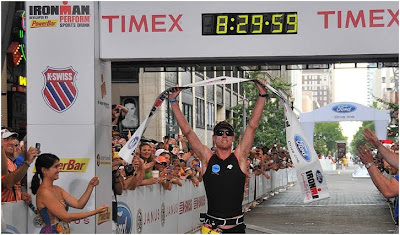 The men’s field consists of 13, and features a mixture of guys that have raced in Louisville before and a few that are going to experience it for the first time. Most notable is the defending champ, Paul Ambrose from Great Britian (pictured above). Interesting fact I learned about Paul is that he’s a training partner with Chris “MACCA” McCormack…the current Ironman World Champion. Paul dominated the field last year by having the fastest bike and run splits. His total time of 8:29:59 was 12 minutes ahead of the second place finisher. Paul just raced a half-Ironman (Lake Stevens) on August 14th where he finished 2nd…and after IMLOU, he heads to the Ironman 70.3 (half-Ironman) World Championships in Las Vegas on September 11th. So Paul’s schedule is pretty full. Based on this schedule, I don’t think is body will be up to the task to defend the title.
Patrick Evoe also returns to Louisville trying to improve on his 4th place finish a year ago. He raced the inagural IM Texas (his home state) earlier this year and came in 8th. He’s also coming off of a 3rd place finish at IM 70.3 Racine, so I think he’s probably looking good for a top 3 finish come Sunday.
Tim Snow is another American that is coming back to Louisville. He finished 14th last year, but has improved his Ironman times with two solid races already this year. Hiroyuki Nishiuchi, Dave Harju and Bojan Maric also raced last year. Let’s just say that they are returning to conquer a course that conqured them last year.
Romain Guillaume from France hasn’t raced here before, but he’s put together some fantastic IM distance races this year (2nd in IM Bolton) and looks to be in good shape to challenge for the podium this weekend. Plus, the dude rides the same bike as me, so he’s got an advantage there!
Chris McDonald is a name that might sound familar. The Australian won the inaugural IMLOU back in 2007 and came in 2nd to Max Longree in 2008. He didn’t race here in ’09 or ’10, but is back on the roster this year. His nickname is “Big Sexy” and he’s had some great races already this season (including a 4th place finish at IM 70.3 Steelhead) and seems to be coming into form. He’s who I’m putting my money on this year.
The rest of the men’s field is Ivan Albano Jr., Daniel Bretscher, Justin Daerr, Logan Franks and Richard Wygand. Only one of these guys has raced here before, and some of them are having great seasons…but their lack of experience on this course will make it hard for them to win. But then again, I’m no expert…so it’s anyone’s race. 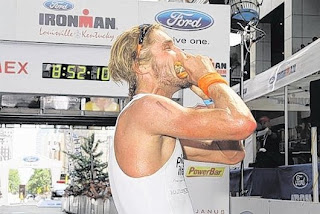 Missing from this year’s race are two pro’s that everyone around here likes to see. Most notably is Max Longree of Germany. He won here in ’08, finished 4th in ’09 and 3rd last year. He clearly does well here and is known for wearing all white and eating a cheeseburger from the Hard Rock Cafe immediately after crossing the finish line (see picture to the left). I’m not sure what’s going on with Max…I can’t find any races that he’s even done this year.
Also missing this year is John Flanagan from Hawaii. He’s ALWAYS the first guy out of the water, breaking swim records everywhere he goes. His 6th and 13th place finishes the last two years point out the fact that the dude can bike and run as well.
One reason that I feel that this field isn’t full of stud athlete’s is because there is a competing race. Ironman Canada is held on the same day and offers a larger price purse ($75K vs. $25K) and more World Championship qualifying points (2000 vs. 1000) than Louisville does. There are more than twice as many pro men toeing the line in the race up north this weekend. I thought that the fact that IMLOU is one of the last races available to get points to qualify for the Championship in Kona this year would mean a larger field…I guess everyone planned ahead and isn’t as desperate as I thought they would be.
I’ll look at the women’s field tomorrow.