I try not to get too political on this blog. The purpose of this blog is to help my friends and family keep up with my training and races, and to hopefully give some tips to other triathletes and runners. If I give my opinion, it’s normally regarding a training style or piece of equipment. However, I feel that a recent ruling by a local judge needs to be address here…especially considering the crime that was committed. 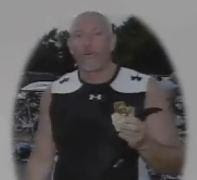 On August 1, 2009, John Carr (pictured at left) was competing the Tom Sawyer Triathlon. This is a race that I myself raced in 2008 and again this year. If I wasn’t out of town during the race in 2009, I’m sure I would have been there. After competing the swim portion of the sprint triathlon, John Carr headed out onto the 14 mile bike ride. While on Chamberlain Lane, John was hit from behind by a car…driving at a high rate of speed. John was thrown from his bike by the impact and died from blunt-force trauma. An impact so violent that his bike stuck in the windshield of the car! The driver of the car, drunk and high, continued to drive, with the bike in his windshield, for almost half a mile.

An off-duty police officer working the race saw the car and immediately jumped in his cruiser and chased. Once the car stopped, the driver, 26 year old Kenneth Yates (pictured at right) jumped out and fought with the police officer. He then fled on foot – running all the way to his Mother’s house. His Mom, who apparently has some sense, brought him back to the scene. Yates was immediately arrested and charged with murder, assault of a police officer, driving under the influence, leaving the scene of an accident, third-degree assault on a officer, disarming an officer, fleeing and evading, resisting arrest, and operating a vehicle on a suspended license.

A little over a month before this incident, Yates was charged with DUI and reckless driving…thus the suspended license.

Fast-forward to November 24th of this year (three days ago) to the sentencing (so much for the sixth amendment’s right to a speedy trial). Jefferson County Circuit Court Div. 13 Judge Frederic Cowan sentenced Kenneth Yates to 15 years in prison, with eligibility for parole in 11 years. While I would like to say that Judge Cowan made the wrong decision, apparently this length of sentence is appropriate under Kentucky law for first-degree manslaughter…which is ridiculous.

Kenneth Yates will be credited for the year that he’s already served, so in 2021, at the age of 38, he will likely be a free man.

John Carr had a wife and two young children (6 and 8 years old). He will never get to see these kids grow up. They will miss all the wonderful time that they would have spent with their dad. He started doing triathlon’s to stay in shape so that he could live to see his children grow old. The Carr family will never be the same. You can’t put a price tag on the life of an innocent man…but this sentence seems too lenient.

According to those close to the case, Kenneth Yates has shown no remorse. He has never asked to speak with the Carr family. Never once told them that he was sorry. He had been arrested on driving under the influence just a few months earlier…and clearly didn’t think it was a big deal. He made the decision to drive drunk, which lead him to ignore police officers, traffic cones, signs and other cars that morning and killed John Carr. He then chose to flee the scene without any consideration for the man that he just hit. Once he was stopped, he fought with the police officer and attempted to take his gun during the struggle. What did he plan to do with the gun? Thank God we didn’t find out.

Some people will say that he made a mistake. That he shouldn’t spend his life in jail. That he could come back into society in 11 years and be a contributing member in our community. I say that he was 26 years old when this happened. He wasn’t and isn’t a “kid”. He’s a grown man that makes his own decisions and knows what he is doing.

When will people start being held responsible for their actions? This is just another indication to me that our legal system is broken. This was no accident. Sure, Kenneth Yates didn’t intend to hit John Carr that morning, but he did intend to get drunk and high and drive…again. What kind of person drives half a mile with a bike lodged in their windshield after hitting someone? What kind of person tries to take a police officer’s gun from him? I know that jails and prisons are full, but issuing more and more lenient sentences to criminals is not the answer! I hope and pray that Kenneth Yates is fully rehabilitated once he’s released…for all our our sake!