I already know that I’m going to stir up some controversy with this post. There is a large group (growing every day) of runners that believe that a minimal shoe is the answer to all of those nagging injuries that runners face. I for one, do not believe this to be true. In fact, I’ve seen articles written that talk about the increase in running injuries due to people running in these shoes. In full disclosure, I will admit that I have never run in a minimal shoe. Why not? Because of my feet.
In his infinite wisdom, God gave me feet that are flat. I don’t mean that I have a low arch, I mean that I have NO arch! They are so flat that the Army may not even take me. Flat feet are not ideal for running. When my foot hits the ground, the lack of an arch causes my foot to roll inward. This inward roll is known as pronation. The more the foot rotates inward, the more the leg internally rotates. Most people’s feet only pronate a few degrees, mine rotate more in the 10-15 degree range. Excessive internal rotation of the legs (tibia) leads to a chain reaction, affecting the knees, hips, IT band and shins. It can lead to serious problems like stress fractures and degenerative joint disease.
When I first decided to run back in the late 90’s, I went and bought a pair of Reebok running shoes from a sporting goods store (I cringe just typing that!). I trained in these and ran a half marathon…through pain. I assumed that the pain in my knees and shins was normal for new runners and just sucked it up. My Dad found out that I was running in these shoes after the race and immediately took me see someone that could fit me with the proper shoe. I’ll never forget what Swag said to me when I showed him what I had been running in. “I can’t believe you’ve been running in those bloody shoes.” He’s from across the pond, so the word “bloody” is part of his typical vocabulary. He fitted me with some good stability shoes and I’ve never looked back.
Based on my knowledge of what my flat feet and overpronation can lead to, there is no chance that I am going to throw on a pair of running shoes that does not offer the arch support I need. I like to run, I don’t like to be sitting at home nursing an injury!
So this is why I do not think that Vibram Five Fingers or Newton’s are for everyone. If your foot is biomechanically correct, then these types of shoes will probably be fine for you to run long distances in. I understand that wearing these shoes over time will strengthen the muscles and joints in your feet, ankles and legs; but they are not going to magically create an arch for me. I also understand that they force you to land on your mid-foot as apposed to your heel..giving you a much more efficient stride – but you can train yourself to have a mid-foot strike without wearing a minimal shoe…I’ve done it. 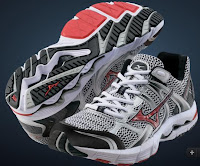 So why do I bring all of this up today? It’s because this morning was my first long run in my new Mizuno’s. I’ve run in Asics exclusively for the last three years. I’ve probably been through six or seven pair of Asics Gel Foundation shoes. These are what Asics has to offer for sever over-pronators and has the support that my foot needs. I’ve had zero problems with them. So why do I now have Mizuno’s? Because I waited too long and put too many miles on my Asics before finally making time to get some new ones. When I finally made it out to Swag’s store, my timing couldn’t have been worse. They were awaiting a shipment of the newest model of the Foundations, but they were out of the current model. So I was stuck. I was afraid to run another step in my shoes because they were already broken down and I had a gut feeling that an injury would result in more use. So Swag suggested that I try out the Mizuno Wave Alchemy (see picture). This shoe is what Mizuno offers for stability and it’s had great reviews. So I reluctantly walked out of the store with a box that didn’t say Asics on it.
I’ve worn the Mizuno’s for some shorter runs and they felt good, but today’s 20 miler was the true test…and they passed with flying colors. Will I go back to my Asics once I’ve worn these out? Probably…but your never know. The point is, if you make the effort to go to someone that can properly fit you in the right shoe for your feet, it doesn’t matter what brand it is, how cool it looks, or what other people tell you to run in. Your body will thank you for it.
I have lots more I could say on this topic, but I’ll just leave it at that for now. Happy running!!