Distance – 8.83 miles
Overall Place – 8th out of 136
Division Place (M 30-34) – 2nd out of 10
Gender Place – 8th out of 78
Total Time – 1:17:02.64 (8:44/mile)
It’s kind of strange to wake up on race morning without having to worry about a full list of things that I need to make sure and take with me. No bike helmet, no nutrition, no wetsuit…just me an my trail running shoes!
I carpooled down to Otter Creek with Charlie and Bill, some triathlete buddies of mine. We managed to easily find the race start and had plenty of time to chat with everyone before the race got underway.
I positioned myself near the front of the pack as I knew that I didn’t want to be worried about constantly trying to pass people on the narrow trail. The race started, and we were off. The first quarter mile or so is on a paved road, so I went out quickly (6:00/mile pace) with the really fast guys and settled in line as we hit the trail. I was surprised at how big and level the trail was. There were no big changes in elevation during the first two miles, so I turned in some fast splits.
I was passed by a few people early on and wondered if I should be running faster. It’s a delicate balance on the trails. You have to watch every step and going too fast can not only cause you to bonk later, but can lead to you ending up eating some dirt. It rained on us a little bit, which made the trails really muddy in some parts. I slipped a few times, but never went down. 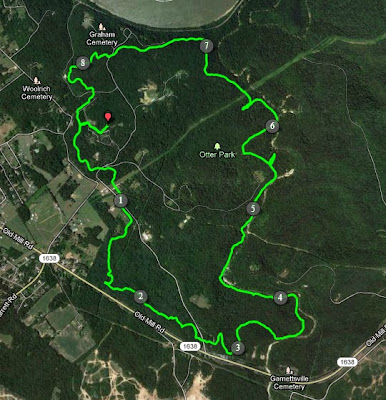 I had guys on my heals for most of the race. I prefer to be in front of a group, so that nothing sneaks up on me. I ran right behind someone for a little bit and didn’t like it. On the trails, you can hear the foot steps and breathing behind you better than you can on the road. So I knew when there was someone there.
I chatted with Ricky George for about a mile or so. He’s an ultra runner that runs with Troy Shelhammer sometimes. It was fun to talk to Ricky about Ultra’s and Ironman. Ricky was doing the full marathon, which was three loops of the trail. Unfortunately, somewhere around mile 4, Ricky rolled his ankle pretty bad. I heard him yell and looked back to see him hobble off the trail. He said he was ok, so I ran on. He managed to walk the rest of the loop (4+ miles!), but his plans on running the marathon were toast. Spraining an ankle is my biggest fear when running on trails. I literally roll an ankle every time I’m out there…furtunately, none of mine have been severe enough that I had to quit running. But I think about it with every step I take. Hopefully my ankles will get strong enough one day that it won’t be a constant worry.
The only real big climb of the race started at mile 5. Despite what I would consider a fast pace on trails, I was still feeling pretty good at the start of the ascent. I quickly noticed that the guy running behind me (I won’t name any names) was unable to keep up. Then I started gaining on some runners as I climbed. I kept the legs moving quickly and was flying up the incline. Miles 6 and 7 were pretty much all climbing and this is where all those runs up the monster hills at Jefferson Memorial Forest paid off. My legs were ready for the hills and I did some real damage during these two miles.
Things leveled out for the last few miles and once I got my breath back and my legs stopped burning, I increased the pace and made sure that no one I passed on the hills caught back up. I left the trail and sprinted down the road to the start/finish line. I was pretty happy with my race and really had fun with it…but I was very glad that I was only doing one loop and not two or three!
I was surprised when I found out that I had a top 10 finish! Much better than I expected.
Food at the finish line was awesome and once my stomach felt ready, I down two bowls of Bill Mark’s famous white chilli and some hot chocolate. Good times!