Six hours…that was the goal. Finish the race in under six hours.

I had done the math in my head. 50 minutes or less in the water, 3 hours or less on the bike, 2 hours on the run…with 10 minutes to be used in transition or on the bike if I had a flat or other mechanical issue.

The day started at 5:00 am, 3 hours before the start of the race. I had my usual whole wheat beagle with Peanut Butter. Jessica even woke up to have breakfast with me…I know, she’s the best. I took care of some other “business” and since all my gear had been packed in the car the night before, I just had to load up my bike and grab my water bottles out of the fridge. I was on the road by 5:45. Here’s all the gear: 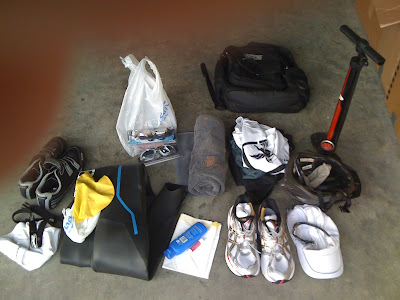 I got to the race site around 6:40 am. I took my bike down to transition and picked out a nice spot in the front row (furthest from the water exit). I prefer to run further from the water to my bike instead of having to run a longer distance with my bike out of transition. Just my preference. I took my time setting up my transition and went over my steps for both T1 and T2 in my head to make sure I hadn’t forgot anything.

I got in line to check in and was marked with #264 on my arm and then my age (32) on my calf. Not sure why they did the age thing…first time I’ve ever seen that. 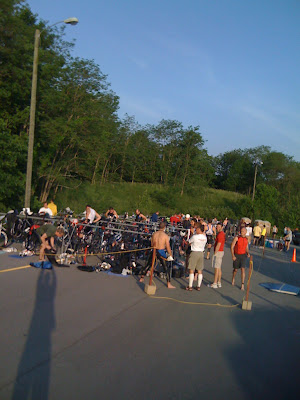 By this time transition was full of people and I decided to go ahead and get my wetsuit on and test out the water. After swimming in the lake a few weeks ago, I was nervous about how I would do…and how cold the water would be.

It felt cold, but was definitely not as cold. The water was way up from all the recent rain. See the picture below…those two docks are normally at the end of the parking lot. 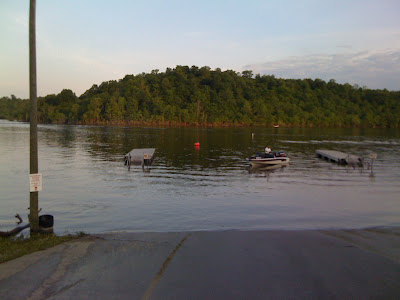 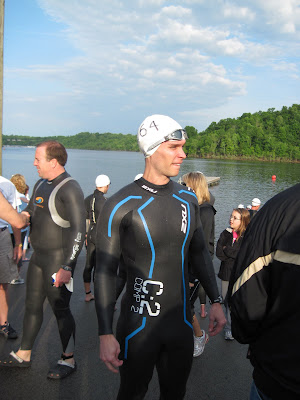 Right before the race started, I headed out into the water again and decided to warm-up my body the “natural” way. I took a leak in my wetsuit. Sure, it sounds kind of gross, but it worked. I could feel the warmth moving up my body inside the suit…the cold water became almost cozy.

There’s nothing quite like that feeling of standing there waiting for the race to start. Knowing this is the last peaceful moment you will have for the next six hours! Then the race started….click on the Play button to see video below.

As with any open water swim, it was an all-out maylay for the first 5 minutes or so. Arms and legs everywhere. I was punched in the head and had to stop several times because there wasn’t room to even extend my arms and attempt to swim. I finally settled into a rhythm and found the first buoy. The race was under way! Thanks to a co-worker (Phil Stevens) of a friend for the video of the start!

I never once looked at my watch during the swim. I thought about it, but stopping and pulling my watch up to my face would really slow me down and I was feeling comfortable and relaxed, so I just swam. Even though my goal was 50 minutes or less, I was actually surprised when I exited the water and looked down at my watch to see 46 minutes and some change. I honestly thought that I was swimming faster than that. I still need to work on my sighting…I was obviously not swimming in a straight line.

I ran up to transition taking off my wetsuit along the way. Even though I had only practiced this once, it came off really easy and I’m sure that everyone around me was very impressed.

I got to my bike and finished pulling the wetsuit off of my legs. I then slapped on some SPF 80 around my neck, arms and legs. I was still wet, so it didn’t exactly rub into my skin very well. Jessica and Kate had arrived while I was in the water and were there with my parents at T1. It was good to see them before heading off on the bike. 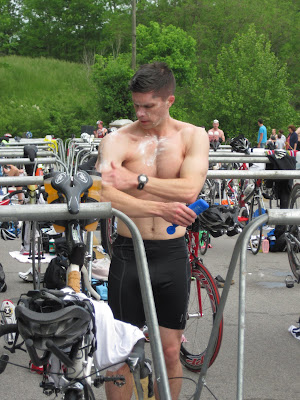 T1 took me longer than I wanted, but I did spend about a minute or so putting on sunscreen…which is a no brainer. I’d rather lose a minute in a race than lose some of my skin to melanoma!

I knew the bike route fairly well from my ride there a few weeks ago. I knew that I was in for a rough three hours, but I felt very fresh out of the water and I knew that my heart rate was still in a good spot. Unfortunately, my bike computer decided not to work (for the first time ever), so I had no idea what mile I was on, or how fast I was going during the bike portion. This really sucked; I depend on this info when I ride and I can’t count the number of times I looked down to see my speed and/or mileage just to be reminded that I had neither!

The bike is where you have to get the majority of your nutrition for a race of this distance. So about 15 minutes into the bike, I started drinking Gatorade…which I did every 15-20 minutes for the entire ride. As I was heading up one of the monstrous hills, I lost my grip on my bottle. It was too early in the ride to let it go…I would need the calories…so I had to stop, turn around and get it. Not fun. All of my momentum was lost.
Here’s the bike course elevation (that hill at mile 46 is agonizing):

I started eating my PowerBar bites about 45 minutes into the ride and was able to get in 4 of the 6 I had stuck to my bike frame. I also took in a gel at 1 hour, 1:45 and 2:30. There was a bottle service at the half-way mark (mile 28), so I chucked my empty bottle of Gatorade and replaced it with water. I alternated water and Gatorade for the last half-hour of the bike. 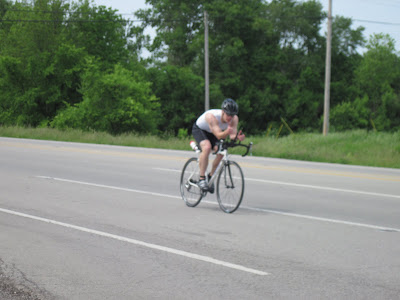 Around mile 47, I was shirting gears heading up that large hill and my chain popped off the gear. Having to stop and fix this cost my about 3-4 minutes, but I was so close to the end, I didn’t let it bother me.

I headed back into transition just under three hours (2:56). I was happy with this time considering the two times that I had to come to a complete stop along the way.

I dropped off the bike and helmet, put on my running shoes and hat, threw three gels in my pockets and headed out on the run. 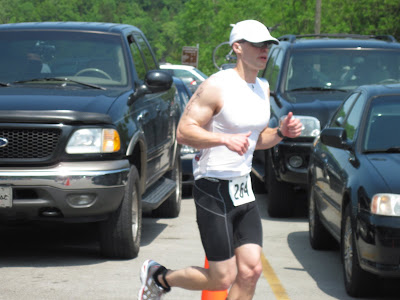 The run starts off with a very big uphill climb. This is not very fun coming off of three hours sitting on a bike and my legs were screaming! Both quads started to cramp as I reached the top of the hill. I gave them a smack and said “come on legs!”. The pep-talk must have worked, the cramps disappeared and never came back.

The course was three loops of an out-and-back with lots of rolling hills. Fortunately, that first big hill wasn’t seen again until you got to run down it at the end. Here’s the run course elevation:

The hills don’t look that big on the chart, but trust me, they are no fun. I took in water at every station and started taking in HEED during the last half of the run. The problem that I had was that my stomach was full of liquid from the bike. I could literally hear the water and Gatorade sloshing around in my belly. The temperature was rising, but with the stomach issues, there was no way I could eat any of the gels that I had planned on taking during the run.

So even though I could hear (and feel) my stomach sloshing around with every step, I had not choice but to continue taking in water and HEED. I needed the calories and carbs in order to complete the run.

The course was very tough from a mental standpoint. Three loops of the same route play havoc with your mind. You see the same scenery, the same people going the opposite direction…over and over again. It’s like Groundhog Day from hell! I completed the first half (1-1/2 loops) in 1 hour and 2 minutes (9:27 min/mile). While I knew that this wasn’t the pace that I wanted, I knew that I could probably sustain it for the second half. I stopped running only to drink HEED or water and even continued to walk during these brief 10-20 second periods. I could feel blisters forming on the balls of my feet, but I knew that I had to keep moving.

I passed several people that had started walking during that last lap. Casualties were mounting up very quickly as the sun had come out and temperatures were in the low 70’s. I began to drink the HEED and dump the water on my head to try and stay cool. Once I reached the last water stop, I emptied out the tank and ran as hard as I could back down the hill to the finish. 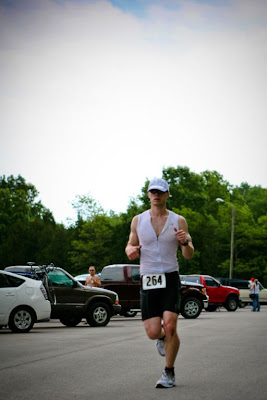 At this point, I knew that my 6 hour goal was going to be a reality.

I crossed the line at 5:57:38 and was never more happy to be done with something in my life. In the words of the old Nickelodeon TV show, I took “the physical challenge”…and successfully completed it! 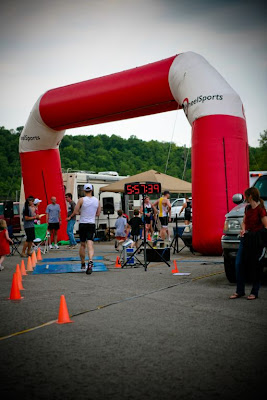 At the time I was very excited that I had done the race in under 6 hours, but looking back at my times for each discipline, I know that I can do better! I’ll take it easy this week and then start training next week for my next Half Ironman…Cardinal Harbour on July 17th!!