Nutella is not a new product. It’s made in Italy and has been on the shelves in stores there since the 1960’s. It’s even been here in the US in certain places since the early 1980’s. But it just in the last 4-5 years that it’s been readily available in just about every grocery store. It’s no coincidence that they have only been marketing the product to American consumers for a few years. We all know what suckers American’s are for believing what they see and hear on TV.
I’ve been hearing people talk about Nutella for a couple of years now. It’s marketed as a healthy alternative to butter or jelly for toast. The reason I had to cross out “healthy” is because in April of 2012, the makers of Nutella were sued for false advertising and had to pay out $3 Million and change their labeling and marketing. They could no longer advertise that Nutella carries nutritonal and health benefits and coould no longer say that it is “part of a nutritious breakfast”. In a true spin, the way only a marketing company or a politician could do, they now say that it “can form a part of a balanced breakfast”. They also claim that it “can be a quick and easy way to encourage kids to eat whole grains.” As if stuffing kids full of whole grains is healthy. The new front label touts that it contains hazelnuts, skim milk and cocoa. These are healthy things, right?
But the damage is already done. The seed has been planted in the American consumer’s mind and people actually believe that this stuff is healthy. Why would anyone think that a chocolate spread is healthy? One word – “nut”. We all know that nuts are healthy, right? So something made from hazelnuts must be good for us, or at least better than butter, right? WRONG.
Not only is Nutella not healthy, it’s really, really bad for you. I cringe every time I see someone post on Facebook that they are eating it…of even worse, feeding it to their kids. I’ve seen people share a website that had tons of Nutella recipes. Like putting this junk on pancakes, pizza, apples, etc.
So how bad is it? Let’s compare Nutella to something that you would never consider spreading on a piece of toast, or dipping apples slices into…Betty Crocker chocolate cake icing. 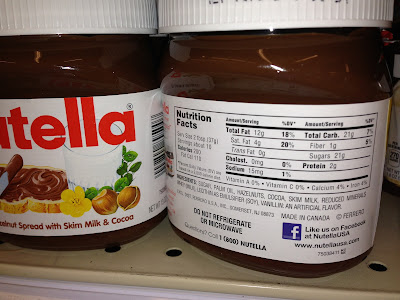 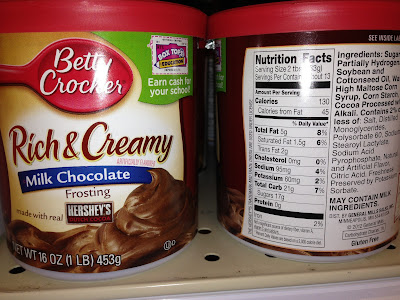 Serving size for both is 2 tablespoons.
Calories – Nutella = 220 / Icing = 130
Calories from fat – Nutella = 110 / Icing = 45
Total Fat – Nutella = 12g (4g Saturated) / Icing = 5g (1.5g Saturated)
Sodium – Nutella = 15mg / Icing = 95mg
Total Carbohydrates – Nutella = 21g / Icing = 21g
Sugars – Nutella = 21g / Icing = 17g
Protein – Nutella = 2g / Iciing = 0g
Top Ingredients – Nutella = Sugar / Icing = Sugar
So they are obviously both garbage and have no nutritional value, but if I was forced to eat one or the other, I would probably choose the icing. It was less calories, less sugar and less fat. The only positives that Nutella has going for it is less sodium and a measly 2g of protein from the small amount of hazelnuts that they actually put in the stuff.
It took me about 30 seconds to walk down two isles at Kroger, find these two items and take pictures of their nutrition labels. Why is it so hard for people to figure out what is healthy? Don’t look at the front of the box/jar. That’s all marketing crap. Turn it around and read the ingredients. It’s not that hard to figure out what is good and what isn’t!
So next time you think you are doing good by getting Nutella, ask yourself if you would eat cake icing the same way you are eating Nutella. I sure hope not!
So what’s the alternative? If you really want to have some sort of chocolate spread, try Justin’s Chocolate Hazelnut Butter. You can find it in the “health food” section of Kroger or most of other supermarkets.
Here’s how it stacks up:
Serving size is the same, 2 tablespoons.
Calories = 180
Calories from fat = 130
Total Fat = 15g (3g Saturated)
Sodium = 65mg
Total Carbohydrates = 12g
Sugars = 7g
Protein = 4g
Top Ingredients = Dry Roasted Hazelnuts (sugar, in this case, organic cane sugar –  is third ingredient) 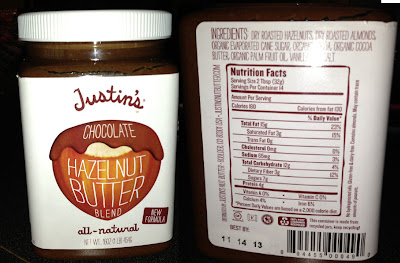 What you don’t see from this label is that Justin’s is made with natural and organic ingredients that are sustainably harvested and found locally if possible. They make it in small batches so that they can control the product. Don’t get me wrong, this stuff is not healthy either – but if you are trying to wean yourself or your family off of eating chocolate spread, switch to this and then gradually stop eating it all together!
I also found this website, that has a home-made version of the stuff, which is always better because you know exactly what is going in it!

One Response to “The Nutella Epidemic”