What a fun weekend! We drove the 2 hours from Louisville up to Indianapolis on Friday afternoon. We immediately hit the Indianapolis Zoo upon arrival in Naptown. Our later-than-planned departure meant that we only had about an hour at the zoo before headed off to meet up with our good friend Jeff and his daughter Kathryn for dinner. We ate at a place called Scotty’s Brewhouse, and I had the “Luke’s Cajun Steak Ranchero Wrap” (I had to get it, right?). We stayed Friday night with Jeff and after a quick 2 mile run Saturday morning we headed to Connor Prairie for some good ‘ol 1800’s style interactions and cow/goat/chick petting – fun times! 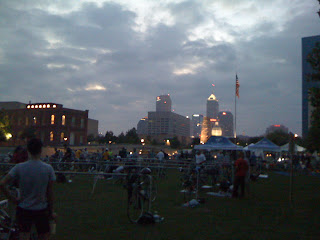 Saturday afternoon we drove downtown and took a drive around the bike route. To say that the roads were in horrible shape is an understatement. They were bad last year and there has been zero improvement. They felt bumpy in the car…imagine how they felt on the bike! We stopped in to pick up my packet and then unloaded everything at Sona and Dave’s place downtown – our Saturday night mooching spot!

After some whole wheat pasta at Buca di Beppo, we hit the hay for a good night’s sleep before the race.
Race morning began at 4:30am – which is my usual wake time, so nothing new here. A plain whole wheat beagle and some strawberry yogurt got my body energized as I drove down to the race site.
As usual, I was one of the first people there. I set up my transition area, got my body marked and met up with some friends that were also racing. We stood around chatting about triathlon business until it was time to walk the 1500 meters to the swim start.

This year’s start was time-trial start instead of a wave start that was used last year. That meant that each person entered the water alone…with someone 3 seconds ahead and someone 3 seconds behind. This worked out well and kept things from getting too crowded in the narrow canal. 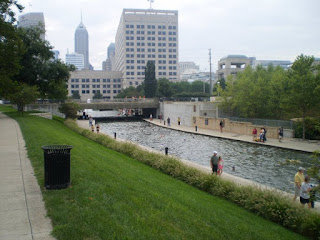 I know that I don’t swim straight…that’s become very clear in all of my open water swims. So my plan was to stay close the the right side of the canal. This worked ok…just ok. I could tell that I was a little crooked several times, but I was pleased with getting out of the water in 34 minutes and some change….2 minutes faster than last year.

Transition 1 went just as planned. I’ve done enough of these now that I can do these in my sleep.

I had some trouble getting clipped into my pedals on the bike, but once I was locked in, I put my head down and got the legs moving. I knew that the course was lined with potholes, bumps and railroad tracks, so I just held my breath every time that I was forced to go over one of the obstacles…hoping that I wouldn’t hear a tire pop or my water bottles go flying! There’s some discrepancy as to the length of the bike route. Race website says that it was 40K (24.85 miles), but my bike computer (which I know is accurate) said that it was only 23.16 miles. Either way, everyone rode the same course, so it really doesn’t matter. I ended up being only 20 seconds slower than my time for last year (which I assume was the same distance), so considering the roads were in worse shape, it’s not a bad time.

Transition 2 was also very smooth. Rode in with my feet out of my bike shoes and had a good dismount. Ran to my bike rack, go the bike racked and running shoes on quickly – no problems.

This was the first race that I’ve run wearing my heart rate monitor. I don’t really have a reason for deciding to wear it, other than wanting to see what my heart rate was during the run. Turns out my average HR on the bike was 144 (low end of zone 4 – which is ideal for a race). My heart rate stayed in the mid 150’s during the first 3.1 mile loop on the run.  This is only zone 2, which is a too low for a race, but I wanted to make sure that I had some juice left for the second lap. Average pace for lap 1 was around 8:15 min/mile. I felt good and I knew based on my HR that I could step it up on lap two…so I did. I picked up the pace to around 7:50 min/mile for miles 4 and 5 (HR was in the low 160’s) and then gave it all I had for the last 1.2 miles heading to the finish. I ended up finishing the run at a dead sprint and managed to shave 10 minutes and 21 seconds off of my run time from last year. The heart rate monitor helped me on the run and it will probably have a permanent spot on my race gear checklist.

This was without a doubt my best race of the year. After all the problems at Cardinal Harbour, it was nice to have a day when everything went as planned!

Congrats to Jon and Brian for completing their first Olympic distance tri and to Kevin for his top 25 finish in the duathlon!

Thanks to Jeff, Kathryn, Sona and Dave for their hospitality – you helped make it a great weekend! I also want to thank my parents for making the drive up to see me race and to my beautiful and understanding wife and daughter to putting up with Daddy’s triathlon’s!