As I mentioned in my race preview, I felt very fit coming into this race. The only unknown was how my foot would respond once I started running? As it turned out, the tendonitis has healed up…but I paid dearly for the time I spent letting it heal.
When I woke up Sunday morning, it was already warm. As I packed my gear in the truck and started down the road to Taylorsville, my dashboard told me that it was 68F…at 6:30am! It was a little foggy, but that all burned off once the sun came out. I was kind of excited to see the fog. I’ve always wanted to do an open water swim with fog – kind of like a scene from Swamp Thing.
Racing at Taylorsville Lake is old hat for me. I’ve done over half a dozen races there, so I know the set up. Once I had my transition area ready to go, I walked down to the water. I chatted with some Landsharks friends while I adjusted my wetsuit. By the time I actually made it down into the water, it was time to start! A few pre-race instructions, a brief prayer…and we were off.
Since I didn’t get in any kind of warm-up, I didn’t want to go out too hard. So I just pushed it enough to get clear of the crowd, then I settled in. I could see a small group a few meters ahead of me, but I knew that there were some strong swimmers in the field and I had no aspirations of being able to keep up. At the first turn (approx. 500 meters in), I glanced over to the right and only saw a few people ahead of me, but none close enough for me to catch. I was kind of in no-mans land. I looked to my right after making the turn and saw that there was a pretty big gap behind me as well. I felt comfortable with my pace, so I just tried to focus on form and maintain a good pace. At the second turn (half way point), I glanced at my watch – 16:40. This was a pretty good pace for a 1.2 mile swim, so I just stuck with it. I exited the water and didn’t see anyone running ahead of me up the boat ramp. I looked at my watch – right at 34 minutes when I came out of the water. A new swim PR for a 70.3 race. I was in third place coming out of the water (not counting the Aquabike participants).
1.2 mile swim
34:29 (1:47/100m pace)
1st out of 5 in my Age Group
I normally make it a point to fly through transitions. But I decided to take my time during this race. I didn’t want to swim in my tri top, so I had to get it on after pulling off my wetsuit. Once I got it on, I checked the back pockets to make sure that my gels were still there. I put on my socks, buckled on my helmet, grabbed my bike and headed out. My slow T1 cost me a few spots as I came out in sixth place…but I knew I could make that up quickly.
T1
1:51
5th out of 5 in my Age Group
I’ve made the mistake of not getting my feet in my shoes soon enough before on this course…so I took the time to get them strapped in before I hit the big hill. I settled in and got my heart rate under control after the first few miles. The plan was to ride to feel and wattage more than heart rate. This is my first long race with a power meter, so I wanted to see how I could use it in a race. This course is nothing but hills. One after another. Some are long, slow climbs, others are short little rollers. Being a good gear shifter is a must on this course. I was constantly changing gear to try and find the right combination of cadence, power and heart rate for each climb. I passed a few guys pretty early and then played a little cat and mouse game with another rider for about 45 minutes. We would take turns passing one another. The goal was to never let him get too far ahead of me. I would pull that string back if he started to widen the gap. I passed him for the last time with about 20 miles to go and didn’t see him again. Looking at my data after the race, I did a pretty decent job of riding steady for the entire 56 miles. First 28 miles looked like this: Avg Power – 224W, Avg HR – 150, Avg Cadence – 80. Second 28 miles: Avg Power – 211W, Avg HR – 147, Avg Cadence – 80. I also reach 43 mph twice during the race on some downhills – which was wicked awesome! I rolled in to T2 in fourth place, but I could see third place up ahead of me, no more than a minute between us. 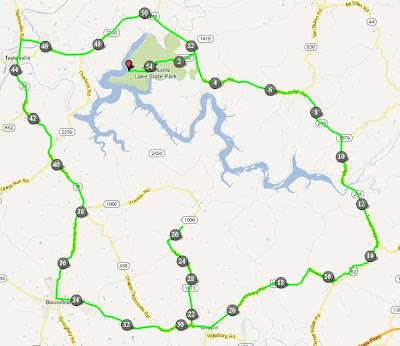 56 mile bike
2:40:54 (20.9 mph)
Avg Power = 217W
1st out of 5 in my Age Group
I was once again slow in transition. I changed socks, which I normally do no do. I wanted to put on a fresh, dry pair as I knew I was in for a long, hot run. I grabbed my hat, race belt and sunglasses and headed off into the unknown…
T2
1:14
3rd out of 5 in my Age Group
I felt a little tightness in my right quad while standing to push up a short climb around mile 40 on the bike. On the remainder of the hills, I tried to stay seated and on the back of the saddle as much as possible to give the quads a break. As soon as I started to run up the hill out of transition both quads cramped. We’re talking about a serious, painful cramp. I pushed up the hill and them tried to walk for a second. Both legs locked up. So I went back to running. I’d experienced this same issue both times I did this race in the past. The combination of riding for 56 miles then immediately asking the quads to push you up a half-mile long hill is just too much. I kept running (jogging) and eventually around the mile and a half mark, the pain subsided. I was relieved that the knives were gone from my quads, but I still wasn’t able to pick up the pace. I was cruising along at a 10 minute per mile pace and it felt like it was all I had. My heart rate was high and my legs were toast…and I still had 10+ miles to go!
I started thinking about when and if I should quit. I had dreams of a five-hour race, and after coming in off 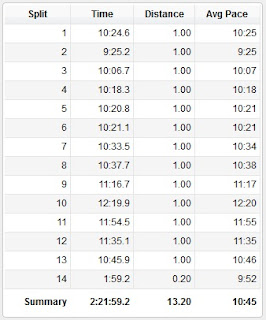 of the bike in 3:18, it was feasible with a solid run. I’ve done this run leg in 1:54, so 1:42 isn’t ridiculous. But the fact that I have only run once (10K at Rev3 Knoxville) in last five weeks made this goal unattainable. It was time to set a new goal…finish the race. I wasn’t even sure if I could hold the pace I was running, but I decided to just run (actually more of a shuffle) between the aid stations (about every mile) and walk for a minute or so while I took in water and some calories. The run course is simple – three loops of a 4+ mile course in the state park. The good news is that you get to see everyone else multiple times. This actually becomes bad news when you know you are running slow and people are quickly gaining on you. I managed to maintain a pace between 10:15 and 10:30 miles for the first half of the run. Suffering the whole time. The sun was beating down and there was no shade on the course. The temperatures had risen to the mid 80’s by this time. I would feel good for a few minutes after each aid station, then I would have to fight to keep running until I made it to the next one.

My low point was around mile 10. I actually started to walk up one of the hills. A runner going the opposite direction gave me a boost by reminding me that I only had one more lap to go. So I immediately started jogging again. I was passed by two people in the last mile. This really sucked. I had no idea what place I was in at this point, but knowing that I was being hunted down for over two hours was not fun. I ran the last half mile back down the hill, not wanting to turn around and see if anyone else was getting ready to pass me. In total, I was passed by six people on the run.

One Response to “TriFest Half Ironman Race Report”