I had planned on reviewing the Professional Field for 2013 Ironman Louisville today, but since there is no list of said athlete’s anywhere to be found, I decided to go in a different direction.
This Saturday (the day before Ironman), there will be around 50-100 people running on the riverfront in just their underwear. If this event were held at night, there might be some arrests made, but since it takes place at 11:30 in the morning, the local law enforcement decides to let the Indecent Exposure violations slide.
So what is the point of this event? It’s two-fold. First of all, it’s a good way for those racing Ironman the next day to have some fun and get their mind off of the race for a little while. The second purpose is to raise money for a good cause. This year’s Louisville Underpants Run will be raising funds for my favorite local charity, The Kids Center. The mini-marathon team that I train each year also raises money for the kids and it’s just a wonderful place. Check out their website if you have a few minutes. 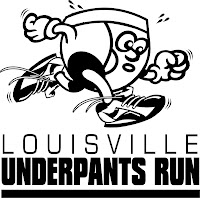 So why underpants? It all started 16 years ago at the site of the Ironman World Championships in Kona, Hawaii. The original run was in 1998 and was done by three guys as a protest. They were upset that they couldn’t wear their Speedo’s into restaurants and stores in Kona. After this first year, the event took off and more and more people started to run in their undies each year a few days before the big race. I have a feeling that at first it was done to make fun of these original guys and their “protest”, but either way, it eventually got so big that it started to become and organized event and then a fundraiser.
Five years ago, a friend of mine, Kevin Brooks, decided to put on a local underpants run just like the one they do in Hawaii. So the day before Ironman Louisville each year, we have the Louisville Underpants Run. He does a wonderful job organizing the 1.5 mile run and I’m thrilled that he decided to pick the Kids Center as the charity each of the last two years. Believe it or not, organizing this event is not a full-time, year-round job. Kevin also custom paints helmets and bikes, so if you want to stand out from the crowd at your next race, give him a shout. Here’s his page.
I’ll be out there Saturday morning in some form of underwear. This is the best I will probably ever look in my under-roo’s, so I might as well show off all of the hard work!
Here are some pictures from the last few years. If you are in Louisville, come on down to the Belle of Louisville on Saturday morning. You can show up in regular running gear if you want, but be sure and bring a donation and get ready to laugh! You can register online or just show up. 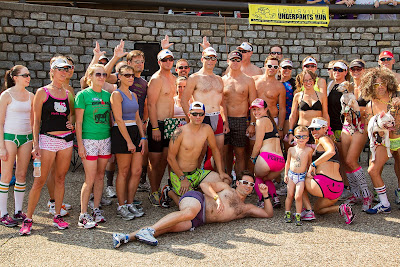 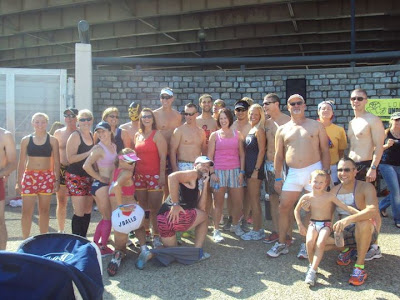 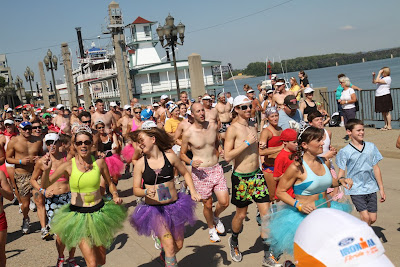 Be sure and visit all of my sponsor’s websites. I sought out these companies because they provide great products and services.
Swag’s Sports Shoes
Rudy Ellis Sports Medicine Center
Garden of Life
GreenBEAN Delivery
Meridian Acupuncture and Herbal Medicine
Earth Fare Supermarket