A few months ago I filled up a tube full of saliva and mailed it off the 23andMe. Once they received my specimen, they did a full DNA analysis and provided me with ancestry-related genetic reports as well as tons of raw genetic data. This is a really cool test and the amount of information they provide is priceless. I’ve been sitting on my results for a few weeks now, so I thought I would take a few minutes to tell you about my ancestry-related reports. Although the FDA is now preventing 23andMe from providing users health-related reports, I was able to find several websites that had downloadable apps that would allow me to upload all of my raw data from 23andMe. I can see literally every strain of DNA that I have and how those could play a role in my current and future health….truly amazing stuff!

So my parents have always told me that our ancestors came over on a boat from Scotland and England. Turns out, they were right (not that I thought they were lying to me about this). According to my DNA results, my ancestry composition is 99.7% European. Specifically 71.1% Northern European ( 48.1% British & Irish, 18.8% French & German, 4.2% Scandinavian). The other 28.6% is non-specific Northern European. The remaining 0.3% is split between Middle Eastern/Northern African, East Asian/Native American and Sub-Saharan African. I guess 0.3% isn’t enough to claim it on a college scholarship application? 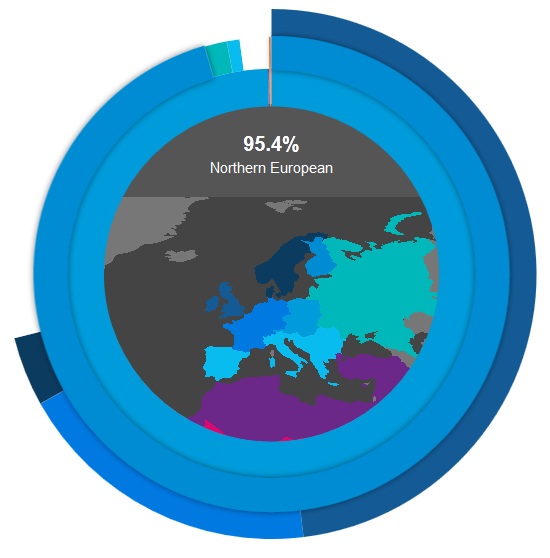 Digging a little deeper into my mitochondrial DNA, I can see that my Maternal Line stems from Haplogroup H. My ancestors originated about 40,000 years ago in the Near East, where favorable climate conditions allowed them to flourish. About 10,000 years later they spread westward all the way to the Atlantic coast of Europe and east into central Asia as far as the Altay Mountains.

About 21,000 years ago an intensification of Ice Age conditions blanketed much of Eurasia with mile-thick glaciers and squeezed people into a handful of ice-free refuges in Iberia, Italy, the Balkans and the Caucasus. Several branches of Haplogroup H arose during that time, and after the glaciers began receding about 15,000 years ago most of them played a prominent role in the repopulation of the continent. My ancestor’s specifically included the Basques and Scandinavian populations. So it looks like my Mom’s side of the family can be traced back to the Nordic countries of Denmark, Norway and Sweden.

My Paternal Haplogroup is R1b1b2, a subgroup of R1b1. R1b1b2 is the most common Haplogroup in western Europe, where it is found in more than 50% of men. Ancient representatives of this Haplogroup were among the first people to repopulate the western part of Europe after the Ice Age ended about 12,000 years ago. In the process the Haplogroup differentiated into even more distinct groups that can trace the details of the post-Ice Age migrations. So this would put my Dad’s ancestors in Ireland and Great Britain.

The other ancestry result provided was that 2.7% of my DNA is from Neanderthals. This number is about average for modern humans. There are many intriguing theories about what traits the amount of Neanderthal DNA may have imparted on modern humans, but we don’t know yet if having a little more than average Neanderthal DNA could explain why someone is extra brawny, short or boorish. My low percentage explains why I don’t have a large forehead and a hairy back!

So all this is pretty cool to know, but as usual, I want to know what I can learn from this new information. I’ve recently read some research showing that the best diet for you might stem from what your ancestors ate. I’m always trying to achieve optimal health, so I figured I would find out exactly what my ancestors ate and maybe this would help me to avoid disease/illness or maybe just get a little closer to my peak performance. I firmly believe that there is no diet that is right for everyone. A vegetarian diet might result for great health for some people, while eating a diet of high fat and protein may be best for someone else.

A diet that is not right for someone could cause gene expressions that can make you vulnerable for chronic disease (Alzheimer’s, cancer, diabetes, heart disease, obesity, epilepsy, etc.). We all know that how and what you eat is a significant factor for diseases, but the degree to which diet influences how likely you are to get a given disease could depend on your genetics. I have no doubt that in the near future, scientists and nutritionists will be able to match someone’s recommended diet to their unique genetic make-up.

The countries of Northern Europe

So if I go back to what foods were available to my ancestors in Northern Europe, I would find lots of wild game and fresh fish. Fruits would have been plentiful along with vegetables and legumes (beans). Seeds, nuts and eggs would have also been a staple in my ancestor’s diet. It’s also likely that dairy was part of a Northern European diet for a long time, giving me a pretty high tolerance for dairy (this does not include “modern”, hormone-filled, homogenized dairy). If we had raw dairy available to us, I would probably include it as part of my diet. From what I can gather, my ancestor’s probably ate a diet consisting of 50-60% fat, 20-30% carbs and 20-30% protein.

As I’ve said before, it takes some trial and error to dial in the right diet for you. But the more information that you have to help build that diet, the more likely you are to get it right. The bottom line is that if you want to have optimal health and performance, stick with whole foods in their natural form…the ratios of fats/carbs/proteins only becomes important when you are trying to heal your body or achieve peak performance!