I’ve done this race a few times in the past. Part of the fun when getting gear together for a race in late February is deciding what to wear. The temperature usually hovers right around freezing this time and year and Sunday was no exception. It was in the high 20’s when the race started and I was going back and forth as to whether I wanted to run and bike in a jacket or just my race singlet. As I was setting up my transition area I realized that it was pretty damn cold. I consulted with a few other guys to see what they were doing and it seemed like I was going to be the only one not wearing a jacket or long-sleeve shirt…so I decided I would be smart (as smart as a person doing a triathlon in February can be) and keep the jacket on.

The race started with a 5K run. This was exactly 24 hours after I ran the Anthem 5K and my legs let me know that they were not happy with the back-to-back races. This out and back run has several rolling hills and one tough climb around the 2 mile mark. After about half a mile into the run, the group thinned out and I was hanging in 6th or 7th place. The fastest 2-3 guys at the front were pulling away, but I was managing to hang with a small group. My legs really started burning at the turnaround and it was a struggle to hold the pace I wanted. I was passed by two people with about a mile to go and managed to catch someone right before transition. I came into T1 in 8th place and heard Nancy (my former swim coach) yell at me that I was 3 minutes down from the leader. I found this comical. Three minutes?!?! I had no expectations of winning the race, but being down three minutes after a 5K run is ridiculous! 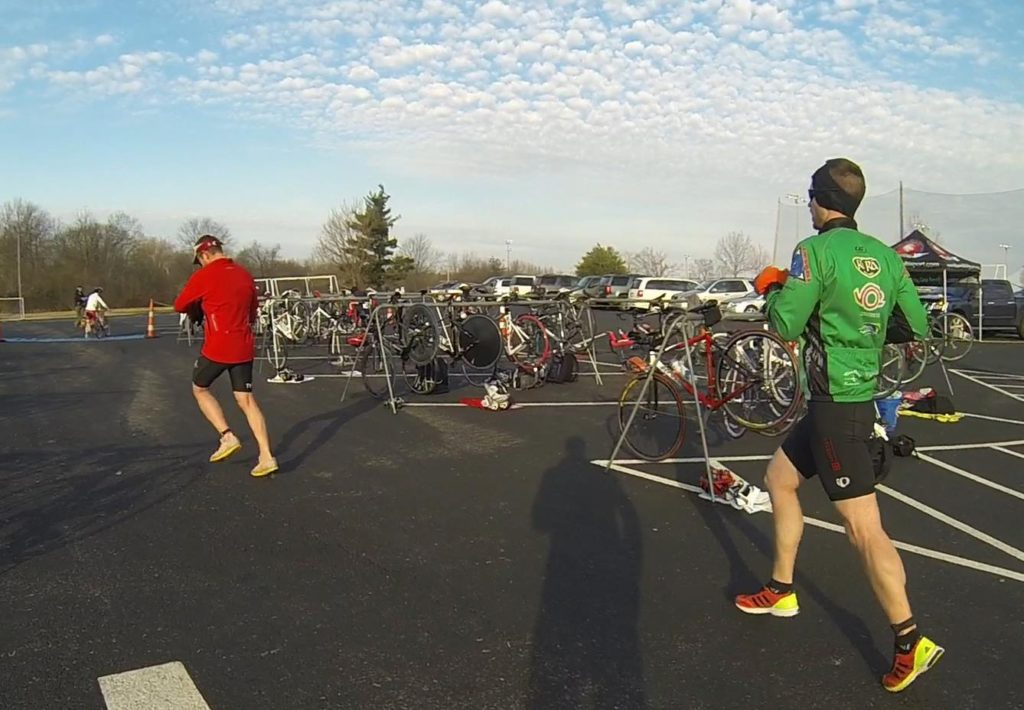 Running into T1 (in the green jacket) – photo by Chase Wininger

I planned on leaving the jacket I ran in while I was on the bike, so T1 was pretty simple. Shoes off, helmet on, gone. I ended up having the second fastest T1 of anyone, but I don’t think I could have done it much faster. My fast transition allowed me to pass two people that had finished the run before me.

As I started out on the two loop bike course I noticed a beep from my watch while I was getting my feet into my bike shoes. My Garmin watch was asking me if I wanted to calibrate my power meter. What?! Not now. So I started hitting buttons to try and make the prompt go away. As I was looking down screwing with my watch,  I was passed by one of the guys that I had caught in transition. I also inadvertently stopped the timer on my watch. I noticed this about 30 seconds later and got it started again. This was a rookie move and I chalk it up to being the first race of the year with a bike portion. I should have calibrated the power meter while I was setting up my transition area. Let’s see if I can remember to do that next race!

This was my first time riding my bike on the road since September. Sure, I’ve been putting in lots of quality rides on the trainer, but it’s not the same. My legs didn’t respond as I had hoped and it really took me until about halfway through before I felt like I got in a good groove. I tried to keep up with the guy that passed me, but he was slowly pulling away as I asked my legs for strength they didn’t have. Between the race the day before and the lack of outdoor riding, the power I was looking for was just not there. While I was a little hot wearing my jacket on the run, I was glad that I had it on the bike. The wind was blowing and it would have been miserable with just the singlet. My bike split ended up being a minute and 36 seconds slower than this same race last year…which is disappointing. I’m hoping that this was a case of tired legs – otherwise I wasted a lot of time lifting and doing power-building rides this off-season!

When I got to T2 I noticed that I was all alone. The guys in front of me were already in the pool and I was far enough head of the person behind me that they never came in while I was “transitioning”. I racked my bike, took off my helmet, sunglasses, jacket, race belt and socks and ran up the hill to the indoor pool. I had stashed my goggles inside the building so that they wouldn’t fog up going from cold air to warm air. I remember a few years ago when I did these reverse-order races that I was one of the only people leaving my goggles inside…now it seemed like everyone is doing it. I guess it just takes trying to swim with fogged-up goggles one time before making that decision!

As I entered the building to swim the final leg of the race, I noticed that there was lots of open water in front of me. I honestly wished that there was someone close enough for me to try and catch. The 400 yard swim consists of going up and back in each of the eight 25 yard lanes. After about 200 yards I could feel my form breaking down and tried to focus on keeping my stroke efficient even though I was completely gassed. There was still a gap of about 100 yards between myself and the guy ahead of me. I took a quick look over to the other side and didn’t see anyone in the two lanes behind me. So I knew that I was going to finish in whatever place I was in. I wasn’t catching anyone and no one was going to pass me before I finished the swim. Once I realized this, I have to admit that I let my foot off of the gas a little bit. As I turned to do my final lap, I did notice that the race clock was still under one hour. So I pushed that last 50 yards to try and get as close to one hour as I could. 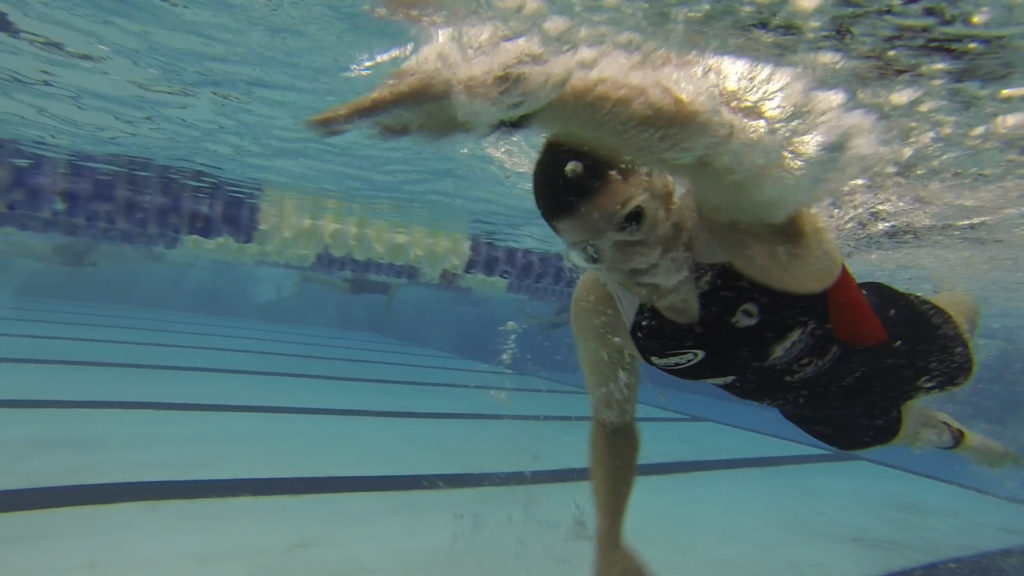 Action shot of me during the swim (photo by Chase Wininger)

Although my race wasn’t as good as I had hoped for, I know that I pushed the run, bike and most of the swim as hard as I could. I’m never going to complain about an Age Group podium and a Top 10 Overall finish! These early season races are a lot of fun and I’m glad that Headfirst Performance continues to put them on every year. I’m always itching to get back to racing after a few months of taking it easy and these Sprint distance races are the perfect cure!