My 2014 race season is built around my “A” race, the USA Triathlon Age Group National Championship in Milwaukee on August 9th. As I laid out my race calendar, I knew that April and May were going to be full of races. I planned out my training so that the 9 weeks leading up to the race in Milwaukee would be full of hard workouts designed to increase my fitness before a short 1-week taper. I also knew that I would like to get in a short race sometime in July to keep the competitive fires burning. I searched the internet and came across the MAC (Meade Activity Center) Triathlon on July 12th in Brandenburg, KY. The race offered both a Sprint and Olympic distance. Doing the Sprint would be perfect! A race that short would require no taper leading up to it and no days off for rest after the race. So I signed up.

I couldn’t find any race results from previous years, so I had no idea what to expect. I saw that the Sprint swim was really short (only 250 meters) and was in a pool. I would have preferred a longer swim, but you can really only make the swim as long as the number of lanes allow. The bike and run were short, but hilly. So I was excited to see how fast I could push myself.

After eating my standard sweet potato with almond butter, I headed out the door at 5:45am. It takes about an hour to get to Brandenburg from my house, but I wanted to allow myself plenty of time to drive some of the bike course. Once I got there, I found the big climb and decided that since the bike section was so short, I would just stay in high gear and mash up the hill – something I wouldn’t do if the race was any longer than a Sprint.

I drove back to the race site and set up my transition area with plenty of time left to chat with other racers. The crowd was pretty small, but I knew several people that were racing the Olympic Distance. For a brief instant, I wished that I had signed up for that distance instead, but then I remembered my ultimate goal – to be able to resume normal training come Monday morning. Pushing through 30+ miles of hills on the bike and run would have definitely resulted in some soreness and a compromised workout or two!

The pool swim was a time-trial start. Meaning that we all lined up and started one after another with 30 seconds between each person. I was second in line and after over-hearing #3 in line say that he swam in High School, I decided that my goal would be to not let him make up the 30 second gap between he and I before I exited the pool. I passed the girl that started in front of me about 75 meters in and kept looking in the lanes behind me as I swam so that I could keep tabs on the guy behind me. Based on when we passed each other as I made the serpentine laps through the 25 meter pool, he wasn’t gaining on me. I was the first one out of the water. Looking at the results, #3 swam a 4:22. So, to my surprise, I actually swam faster than he did by 8 seconds.

I ran up the steps out of the pool and then up a small paved path to the transition area. While waiting in line to start the swim, I scoped out the competition. While it’s really hard to tell how fast someone will be by just looking at them, I saw a few young guys in their 20’s that had the slender-build of a fast runner. So my goal was to have fast transitions, hammer the bike and then hold on during the run. My T1 time was about as fast as I could have hoped for. I threw my goggles down, got my helmet on and was out of there!

The 8.8 mile bike course starts out with a small climb out of the Doe Valley Subdivision. Then it’s a fast down hill to the Ohio River. Since I drove the route before the race, I knew that there were no sharp turns on the decent – meaning I could open it up and go as fast as possible…until that 90 degree turn at the bottom! After flying down the hill with a top speed of 41.5 mph, the course took me on the Doe Valley Lake dam before heading down toward the river for an out and back. The turn around let me see how far ahead I was of the guys behind me. It didn’t look like I had put much space between myself and the guys behind me to that point, so I had a renewed sense of urgency to mash back up the hill that I knew was coming. I stayed in my big chain ring and pushed it up the mile and a half Category 5 climb (see elevation chart below). The last mile or so is downhill back to the transition area and I felt good as I coasted into T2.

I usually don’t wear socks in a Sprint distance race, and this was no exception. Even with the baby powder in the bike and run shoes, it took me longer than I had hoped to get my feet into my running shoes. This slowed up my T2 a little, but overall it didn’t cost me too much time.

The run starts off heading straight up a hill. It’s only a half-mile climb, but you gain about 100 feet in elevation…and on legs that just did what amounts to a 20 minute bike time trial, it was tough! Because of the way the swim started, it was really hard to gauge how much time I had gained on the competition during the bike. I saw the two younger guys coming in on the bike as I climbed up the hill out of transition. I watched my pace slowly creeping up close to 9 minute miles as I pushed toward the top. Once I reached the top, I knew that it was net downhill from there. So I focused on increasing my cadence and running as fast as I could. Looking at my pace chart after the race, I saw that my pace continued to increase once I got to the top of the hill – even managing to get down to 5 mile/mile pace over the last 1/4 mile.

I crossed the finish line and basically waited to see how far behind the competition was. To my surprise, it was a few minutes before anyone else came in. I was feeling pretty good about my chances for the overall win, but with the swim being so short, someone could have started a few minutes after me in the pool and still had a faster overall time. After getting some water and walking around a little to cool down, I walked back toward the finish line and Chase from Headfirst Performance told me that I was looking good for the overall win. He was checking finishing times on his computer and said that no one else was really close. When it was all said and done, I won by over two and a half minutes!

Even though this was just a small local race, it was my first overall win and I’m proud of it. My fitness has improved over the last six weeks with all of the hard workouts I’ve put in and I’m feeling like I will definitely be able to put forth my best effort in three weeks at the National Championships! 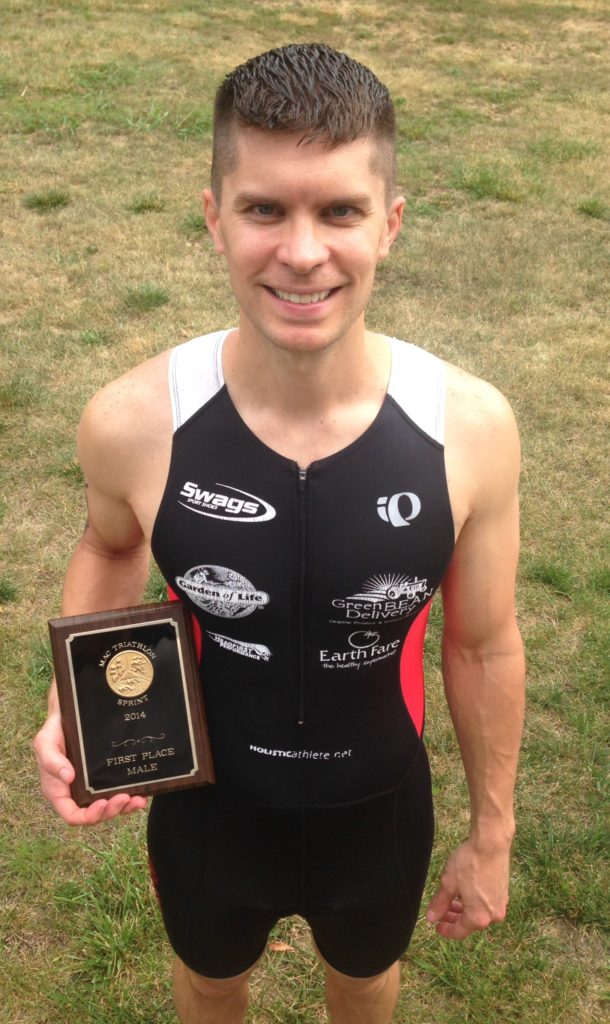 Nutrition used:
Medium Sweet Potato with almond butter 2 hours prior to race
Water at aid stations on the run