My 2014 season is official underway! Sunday was my first race of the season, a modified triathlon at Clear Creek Park in Shelbyville, KY. Our little glimpse into what Winter is like for Canadian’s continues and the bike portion of this Sprint Triathlon had to be cancelled due to concerns over ice on the roads. This race was originally scheduled for January 26th, but thanks to snow and extreme cold, it was moved. So I toed the line for a run-swim “triathlon” this past Sunday morning. 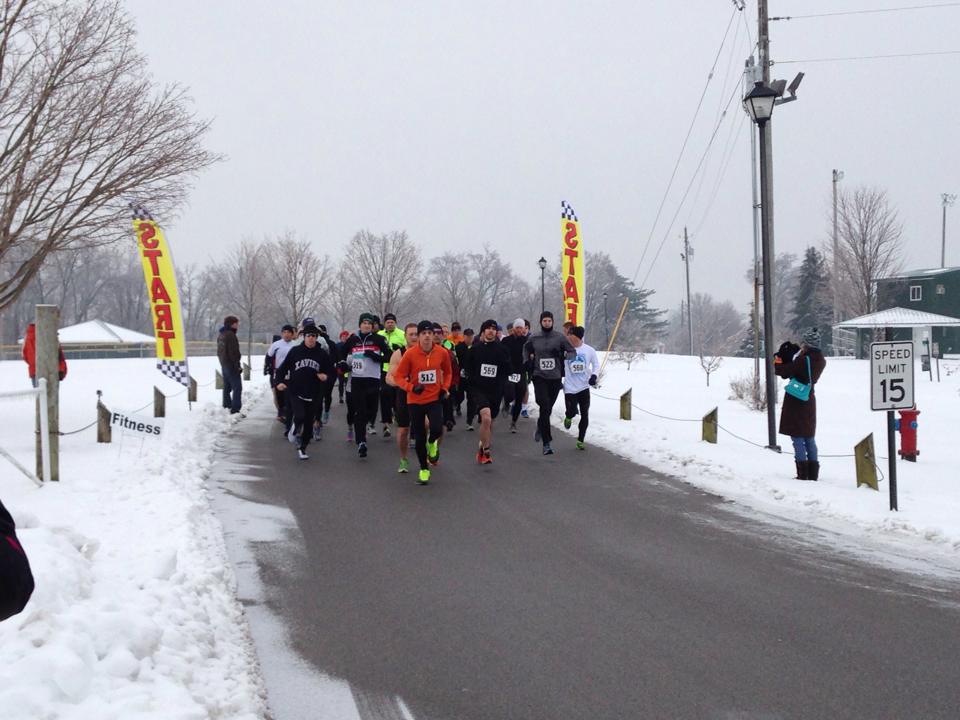 Race start. I’m just to right of center, wearing all black. Thanks to Jessie Halladay for the pic.

The race started with a 3K (1.9 mile) run on snow/ice covered pavement and cart paths. With only about 40 (crazy) people doing the race, it thinned out pretty quickly. I knew I couldn’t hang with the fastest guys, so I ran at a pace fast enough to feel hard, yet slow enough not to slip and fall! Three guys were spread out in front of me as we made the turnaround on the out-and-back course. The rolling hills make this course a little more difficult than you would expect for such a short run. I’ve been doing lots of interval work, so running hard didn’t feel all that uncomfortable to me. The temperature was in the high 20’s, so I went with an Under Armour shirt over my tri suit. I had on a hat and gloves as well. I was passed with about 1/2 mile to go but I was also gaining ground on another guy, so I headed into transition in 5th place.

In races this short, a fast transition can make a world of difference. I ran without socks (which I normally don’t do) and took my gloves and hat off as I ran the last 50 feet or so into the building. Transition was set up in the hallway between the entrance to the building and the pool. I pulled my Under Armour off as I ran down the hallway and then slipped my shoes off and grabbed my goggles. I had the 2nd fastest transition, which helped me get into the water before a guy that finished the run before me. So I was in 4th place starting the swim. 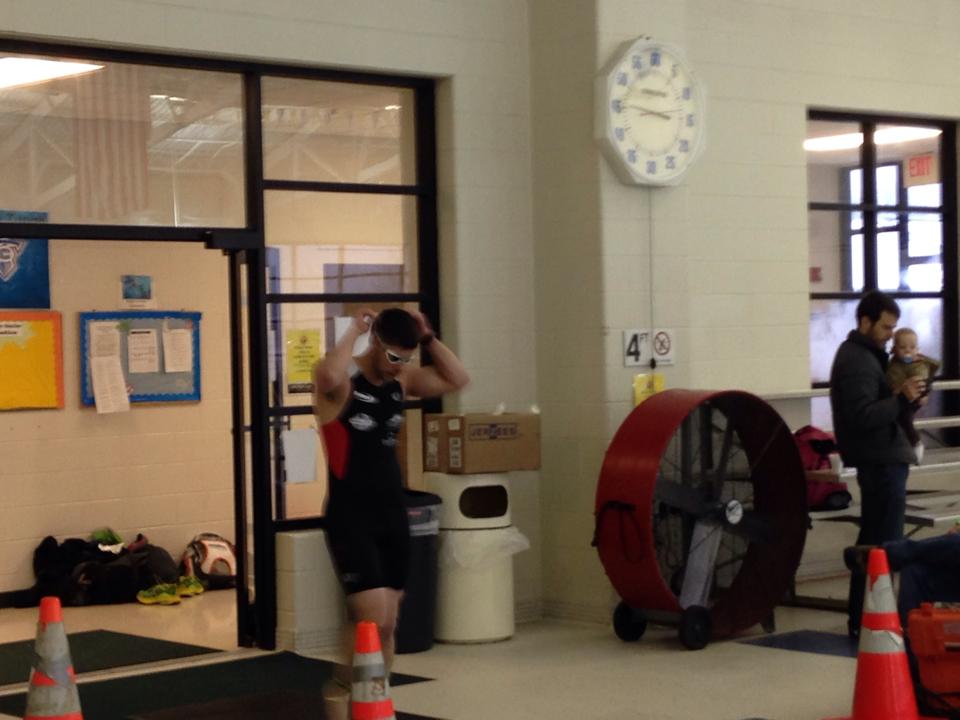 Getting ready to jump in the pool after the 3K run. Thanks to Jessie Halladay for the pic.

My swimming has really suffered since Ironman Louisville last August. I’ve only been swimming once a week and my times in the pool have been slipping. My schedule at the moment just doesn’t allow for me to get to a pool more frequently. So as I started the 400 yard swim the goal was simple…just hang on! I got into a good rhythm and was even gaining on 3rd place after a few laps. Then I looked to my right and saw someone gaining ground on me. Sure enough, about 50 yards later, I was being passed. As the swimmer went past me I looked over underwater and saw that they were wearing a full swim suit…this was in fact a very fast female swimmer! Either I ran out of steam or the guy in 3rd place found some energy because I never could close the gap. If it was any consolation, the woman that passed me caught him also and finished with the fastest swim split of any man or woman. My swim time was actually the third fastest in the field, but I know it is much slower than it should be.

This was without a doubt the shortest and fastest race I’ve ever done. It was over just as fast as it started. I’ve put a lot of time and effort into improving my power on the bike this off-season, so let’s hope I get to ride it in the next race!

A race is a race no matter what. I was eager to have that race-morning feeling again after 4+ months of off-season. The second race in the series is just two weeks away, and I’m already looking forward to it!