They say that football is a game of inches. If this is true, then Sprint Triathlons are a game of seconds.

I knew that the forecast was calling for a “wintery mix” overnight Saturday and into Sunday. So while I really wanted to get my bike out on the road, I figured the odds were not good. As I started the drive to Shelbyville at 7:00AM yesterday morning, the freezing rain was falling. By the time I got there and stepped out of the truck, the parking lot of Clear Creek Park was a slippery mess. At that point, the race crew from Headfirst Performance was still planning on having a bike portion of the race. The racks were set up and they had the course maps posted. However, as they surveyed the conditions, they made the right call and changed it to a just a run-swim race.

The bike has always been my strongest, so I was disappointed about it being cancelled. The race would now consist of a 3K (1.86 mile) run and then a 400 yard swim in the indoor pool. My run training has been 100% aerobic (keeping heart rate low) for the last three months, so I knew that sprinting almost two miles would be a challenge…and it was!

In order to speed up  my transition time and because I don’t mind running in the cold, I opted to run in just my singlet tri suit. No gloves, no jacket, no hat, no socks, no pants. I might have looked crazy, but I honestly didn’t get cold. 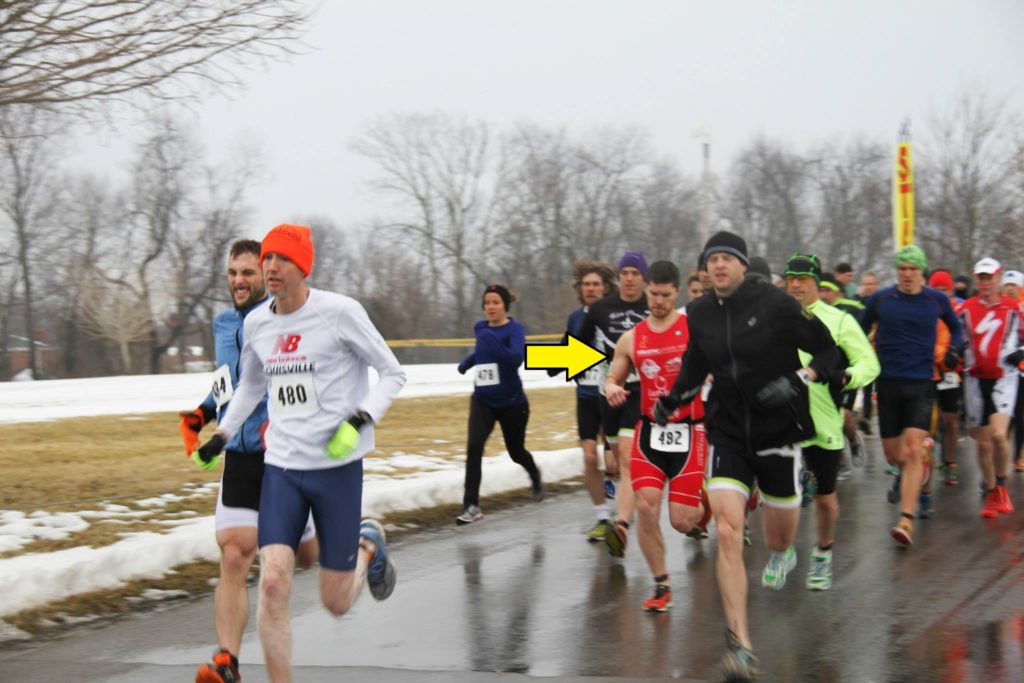 Everyone else seems to be dressed appropriately.

The horn sounded and we all headed out on the out-and-back course. It takes place on a mixture of parking lots, paths and roads – all paved – and allc covered in a slippery slush! I felt my feet slip a few times, and took the turns really slow, but I never felt like I was going to bite the dust. I fell into seventh place pretty quickly and managed to hold on until we got back to the park recreation center. I was breathing heavy and knew that my pace was about all I had in me on this day. I’ve run this 3K faster in previous years, but I was also doing a lot more speed work then. So I can’t be too upset at my split yesterday.

My transition was not as fast as I had hoped because I had trouble getting one of my shoes off. I tried to pull it off by the heel with the toes of my other foot, but it was on too tight…so I had to reach down and rip it off with my hands. All I had to do was take my race number belt off (which I did as I ran into transition), take my shoes off, and put on my goggles. It should have taken me 3-4 seconds less than it did. The transition time also included a short run from the parking lot to the building.

I managed to pass someone in transition, so I entered the pool in sixth place overall. With the swim only being 400 yards (up and back in each of the eight pool lanes), there’s no time to worry about pace…so I just pushed it right from the start. I could feel myself slowing down about half way through, but the tank was empty. My swim fitness is garbage right now. I was passed once in the water (by a very fast female), and I caught up to my buddy Shaun with about 100 yards to go. So going into the last lane, I was back in sixth. I was gaining on the guy in front of me, but I don’t think I had time to catch him. I was about 40 yards from the race ending when someone coming in the other direction hit me in the face and knocked my goggles down around my neck. I stopped briefly and then decided to keep swimming without them on. That only lasted a few strokes as I could not see anything. So I stopped completely to put them back on my eyes. Little did I know that there was a large group right on my heels. In just the few seconds that I stopped, I was passed by six people! They were all bunched together and even though it only took me a few seconds to get the goggles back on, I had lost my momentum and by the time I got back to horizontal in the water, I couldn’t catch any of them. I just a few seconds, I dropped all the way to thirteenth place overall.

I try to plan out things and control what I can on race day, but getting my goggles knocked off with 20 seconds to go in the race was something that I could not control. I was disappointed that I fell out of a top three in my age group and top 10 overall spot, but in the grand scheme of things, it’s not a big deal. It was still run to race and it was good to get out and see a lot of my friends. This short course made for an exciting race. There was only 13 seconds between 7th place and 13th place and only three seconds between 9th and 13th. With four top ten finishers coming from my Age Group (Male 35-39), it’s going to be a fun season racing with all of these guys! 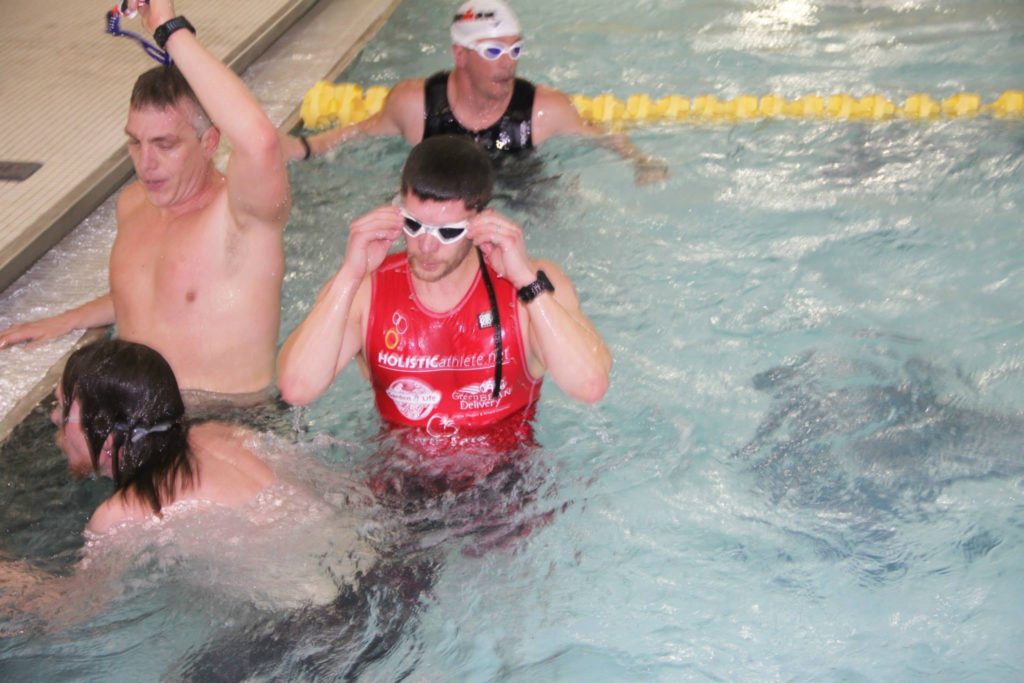 In case you can’t tell…I was a little annoyed as my race ended.