This past Saturday was the Ford Ironman Championship in Kona, Hawaii. It started around 12:30pm Eastern Time and I was able to watch it online on and off all day. I could go off on a tangent about how stupid it is that we can see poker tournaments and Canadian Football live on TV all the time, but no one will show a live triathlon! Sure it’s an 8+ hour event, but doesn’t each round of a golf tournament take that long? Ooops, looks like I’m starting to derail…back to the point. 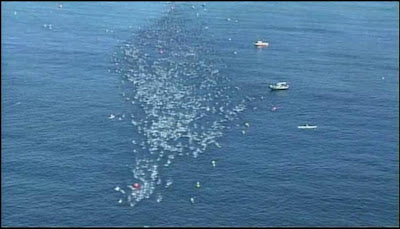 While 1800 age-group athletes competed, the online telecast focused just on the pro’s, so that’s all I’ll address here. The swim start is always crazy. As predicted, the former college All-American swimmer Andy Potts had a lead out of the water. He had almost a 2 minute head-start on the bike, but was caught by a group around mile 18. Chris Lieto (pictured below), who was my favorite to win, took the lead on the bike at the half-way point, but a large group was only about 3 minutes behind. Going into T2, Lieto had over a 2 minute lead on the closest competitor (Maik Twelsiek) and over 7 minutes on everyone else. Andy Potts finished the bike 15 minute behind Lieto. 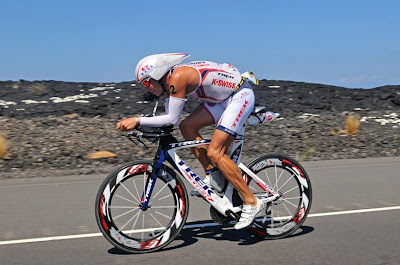 Starting the marathon, the two-time defending champion, Craig Alexander was over 15 minutes behind Lieto…that’s a lot to make up in the run! Among those in the top 10 starting the run were Mario Vanhoenacker, Raynard Tissink, Chris McCormack and Norman Stadler.

Chris McCormack went out very strong on the run, making up a minute on the leader in the first two miles! Chris Lieto was also running strong and holding onto the lead….but by mile 6, McCormack had moved into second and was only 4 minutes behind Lieto. At mile 11, McCormack cruised past a struggling Lieto to take the lead. Hot on his tail was Andreas Raelert, who was only a little over a minute behind.

By mile 18, McCormack’s lead was only 40 seconds on Raelert…and everyone knew he was going to catch him. By this time, it was about 7:30pm Eastern Time and I was back in front of my computer. It was perfect timing, because I was about to see one of the best Ironman finishes in history!

In a race this long (2.4 mile swim, 112 mile bike, 26.2 mile run), it’s rarely close at the end. A race lasting over 8 hours tends to allow someone to pull ahead and cruise to a victory with no one else in sight. This year was clearly going to be different. By mile 21 of the marathon, only 5 seconds separated the two men. By mile 22 they were running stride-for-stride (see picture below). Raelert had worked hard and caught McCormick, but McCormack wouldn’t let him pass easily, it had become a mental battle. I couldn’t get over how comfortable they both looked, running at a pace around 6:15 per mile! 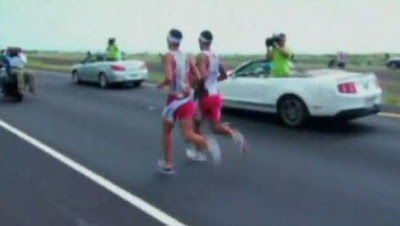 As they approached the last aid station (between miles 24 and 25), Raelert slowed to grab some water…McCormack passed on the water and when he noticed Ralert had slowed, he took off! McCormack punched the gas and gave it all he had. You could see him grabbing his right side fighting off a side stitch. During the last mile, he continued to open up his lead as Ralert didn’t have enough left to catch back up.

Chris McCormack ended up crossing the line with a time of 8 hours, 10 minutes and 37 seconds. Andreas Raelert came across 1 minute and 40 seconds later for second. It was an amazing finish, which you can watch by clicking on the video below (I dare you not to get chills):

The women’s pro race took and interesting twist when the 3-time defending champ (Chrissie Wellington) withdrew from the race just hours before it started. Apparently she had flu-like symptoms. I felt really bad for her and a whole year of training was lost due to something out of her control. Julie Dibens set the pace early with a fast swim and bike. She was finally caught at mile 16 of the marathon by Mirinda Carfrae, who ended up having the fastest marathon ever run by a woman at Kona – a 2:53! After taking the lead, Carfrae pulled away and ended up winning by over 7 minutes.

Watching this race really gets me excited to compete in Ironman Louisville next year! I can’t wait until they show the NBC production of this race on December 18th. This will coincide perfectly with the start of my Ironman training, which begins on December 20th!