During my long run on Wednesday I went a few miles into Seneca and Cherokee Parks. I like running through parks because it takes you away from civilization. I run through neighborhoods and populated area’s all the time – it’s nice to run amongst the trees. One of these trees produces what I believe are hickory nuts. While on the tree, the nuts are housed in a nice shell/husk about the size of a racquetball…and hard as a rock!

More on the hickory nut in a minute. As you probably know, I do all of my runs early in the morning for several reasons. I love getting up early and getting my workout out of the way. One of the issues with running at 5am is that it’s dark – especially in the parks. It’s pitch black. I carry a small flashlight with me, but I usually just turn it on if I see a car approaching. Running down a road in complete darkness is strange. Not being able to see the road or trees as you run past them almost makes it feel like you are running in place…kind of cool. 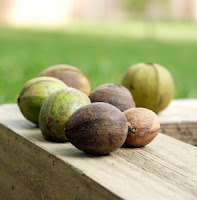 So while I was running in Cherokee Park, in the dark, I stepped directly on a hickory nut. It looked something like the picture to the right. I obviously didn’t see it and my first thought was that I was thankful my foot didn’t roll off the stupid thing and twist my ankle. I felt a slight twinge in my arch during the next few strides, but then it went away…until about an hour later.

Once I got back to the gym and got out of the shower, I felt a pain in the sole of my right foot with ever step. I knew exactly what it was from. I’ve been icing it on and off in the evenings and trying to stay off of my feet as much as possible, but the dull pain is still there.

I went for a short run this morning and felt a minor amount of pain during the run. Hopefully it will subside before my speed workout on Monday!