The race started at 1pm Eastern Time, so I had my laptop all set up and ready to view the race live on IronmanLive.com. I was able to catch the entire swim and the start of the bike leg while the kids were napping. Once they woke up, we headed out to Harvest Homecoming (if you are not from the Louisville area, this is a little vendor fair in southern Indiana). By the time we made it home, the pro men were about 5 miles into the run…perfect timing.
After getting the kids to bed, I sat back down with my computer and was able to watch the last hour or so of the race. It was nowhere near as exciting as last year’s finish, but there was plenty of drama.
Chris Lieto had a six minute lead off of the bike…and we all knew what was going to happen. Lieto always leads off of the bike. He’s a dominant rider, but then he just can’t hold a fast enough pace on the run to hold off the stronger runners. By mile four, Craig Alexander had passed Lieto for the lead. By the halfway point of the marathon, Alexander was up over two minutes on Andreas Raelert and Peter Jacobs. Alexander stretched the lead and by the 20 mile mark, it was going to take a miracle for anyone to catch him. The commentators were doing the math and knew that if he kept his current pace, he would be close to breaking the course record! With just under two miles to go Alexander stopped. He reached down and grabbed his feet, stretching out his hamstrings. He started to run again…then stopped to stretch. Was he cramping? Did he know that the record was within reach? After stopping a third time, he lowered his head and sprinted home. He crossed the line in an amazing time of 8:03:56, twelve seconds faster than the record set by Luc Van Lierde in 1996. This was Alexander’s third Ironman World Championship, putting him in an elite group. 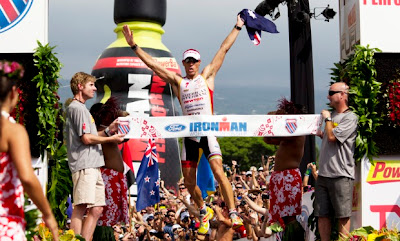 Pete Jacobs passed Raelert for second. Dirk Bockel was fourth and Timo Bracht rounded out the top five. For the record, I correctly predicted two of the top three and also had Bracht to finish 8th.
The women’s race was a little more exciting. Chrissie Wellington had a bike wreck while training last week. No one knew the extend of her injuries. The road rash on her elbow was obvious, but if you’ve ever found yourself lying on the pavement next to your bike, you know that lots of other things are going to hurt. Wellington came out of the water almost 10 minutes behind the leaders…a lead too big for any ordinary triathlete to make up in the World Championship. Julie Dibens and Caroline Steffen took off on the bike after having great swims. As I watched the ladies exit the water, I kept wondering, “where’s Chrissie?”. I was thinking that maybe she was injured more than anyone knew and had a shoulder injury that was hampering her in the water. When I returned later in the evening and picked up the action at the end of the bike leg, she was over 20 minute behind Dibens!
As Alexander was pulling away in the men’s race, the attention quickly turned to the women. Wellington came off the bike running sub-6 minute miles and was cutting into Dibens lead at an alarming rate. In fact, it only took 8 miles for people to catch Dibens. First it was Caroline Steffen. Then Dibens was then passed by Leanda Cave and Rachel Joyce…before dropping out. Steffen and Cave were now both in the sights of Wellington. Chrissie’s pace was just too much. She overtook Steffen with around 7 miles to go and quickly extended her lead to over two minutes. Mirinda Carfrae (last year’s champion) had been running down the competition all day as well, but despite having the fastest run ever, she couldn’t catch Chrissie and finished second. Cave held on for third. Rachel Joyce and Caroline Steffen rounded out the top five. 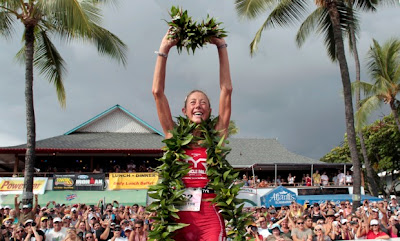 If you are keeping score, I also correctly predicted the top two women. I had Cave coming in 6th and Steffen fourth.
Fun and exciting race, I can’t wait to see the NBC broadcast in December.
On another note, congrats to my two local buds, Scott and Mike. They finished in 13:15:21 and 10:56:55 respectively. Awesome race guys!