I’ve never considered myself weak. Before I started training for triathlons, I lifted weights. I was one of those dudes in the gym that loaded up the bench press or squat rack and pushed out some reps while grunting uncontrollably. In fact, if my memory is correct, once upon a time I could bench press 335 pounds and squat over 500 pounds. Impressed? Yeah, I was “on swole”.
A lot of triathlete’s and runners have never done strength training. Though I didn’t hit the weights nearly as hard once I decided to train for endurance races, I still mixed in some free weights a few times a week. I knew the importance of keeping your muscles and joints strong.
So when I first noticed the pain in my IT Band 6 weeks out from Ironman, I was surprised when my Physical Therapist told me I was weak. To be more specific…my hips were weak. So how do weak hips translate to a knee injury?
Weak hip muscles cause a runner’s form to fall apart. The hips can’t adequately control the motion of the legs…especially after several long runs in a row (which was my critical mistake). When your hips are not strong enough to keep your legs in line, it places stress on the knee and it’s surrounding joints, ligaments and tissue. After logging over 50 hard miles in a ten day period in July, my IT band was swollen, inflamed and too tight to do me any good. I couldn’t even run 2 minutes without being in pain. Weak hips can also lead to Patellofemiral Pain Syndrome (PFPS), which is that pain just below your knee cap…a very common injury for runners. 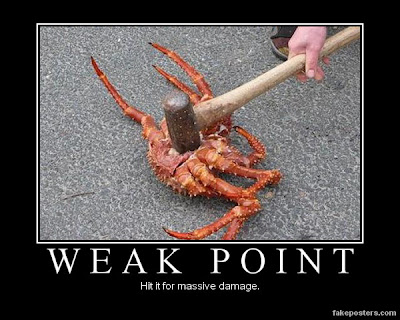 So what did I do to get ready for Ironman…where I was expected to run 26.2 miles? I slowly started strengthening my hips, glutes and core. Along with doing these exercises, I was using my foam roller almost nightly and doing lots of stretching.
In the days after Ironman, my IT band hurt just walking down steps. I took a complete month off of running…while continuing to do my hip and glute strength training. I’m the only male at the gym that ever uses the hip abductor and glute machines!
Over the last two weeks, I’ve had three short runs with very little pain in my IT band. The running hasn’t been easy due to the fact that I’m about 15 pounds heavier than I was just 6 weeks ago, but running without pain is a great feeling.
So don’t make the same mistake that I did. Even if you are doing strength training already, add in some hip strengthening exercises to your routine. I used (and still use) the five exercises outlined in Ben Greenfield’s The Bulletproof Knee.
Ben charges for this program, so I’m not going to give away his secrets for free. If you don’t want to pony up the cash to get his program (worth every penny…not running for almost two months because of an injury is horrible), you should be able to find some hip and glute strengthening exercises online somewhere.
As for my recent training, after a month of taking it easy and packing on the pounds following Ironman, I’m back into a little bit of a routine. I try to swim, bike and run at least once a week now. I’m hoping to up this to twice a week over the next few weeks. I’m doing lots of interval work in the pool and on the bike trainer – I’m done with the long, slow stuff! My 2012 season is starting to come together, more on this later.

One Response to “Why This Ironman is WEAK”