My race started around 1:20pm on Friday (a full 42+ hours before the starting horn sounded), when we finally had all of our bags and children loaded into the truck for our 238 mile trek from Louisville to Knoxville. 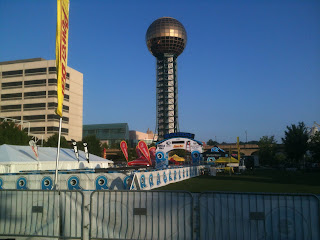 The trip took us about 5 hours and included a few stops to calm our restless children and to throw down some Cracker Barrel (is there anywhere else to eat on a road trip??). Overall, the little ones did exceptionally well considering the length of the trip. We checked in to the hotel and after all the excitement from being in a new place wore off…the kids finally fell asleep. 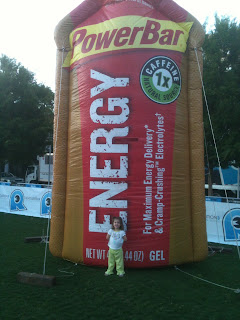 Saturday morning my daughter Kate and I went down to the expo and she tagged along while I checked-in and got my goodie bag. She enjoyed the bouncy house and other kid-friendly activities that Rev3 had set up. They definitely lived up to the hype of putting on a “family-friendly” race. She especially enjoyed the giant gel.
Later in the afternoon, I went down to the river for the swim practice. I met some fellow triathletes from Louisville and we did a short 15 minute swim to get used to the water temperature and squeeze into our wetsuits. After the swim, we did a short little bike ride and then dropped the bikes off at transition. Back at the hotel I started to see some of the pro athletes. Kate and I even rode the elevator with Matty Reed, the two time defending champion. He’s not much of a talker.
After meeting a group of about 20 other racers out for dinner and watching the Kentucky Derby, I was in bed by 9:00pm…although it was probably around 11 before I fell asleep (typical for the night before a race).
Race morning started at 5:00am. I was up and immediately started eating my sweet potato. With no way to heat it up, I was eating it cold, but it tasted good anyway. Trying to get organized in a hotel bathroom before a race isn’t the easiest thing to do, but I managed to get out of the room without waking up the kids. I ran into some friends on the way out of the hotel and we all made the mile or so walk down to the transition/swim start.
I set up my transition area and was down to the dock by 7:00am…just in time to see the pro’s start. Fellow Louisvillian and Landshark, Mike Hermanson was making his pro debut in this race. He had a great race and learned a lot from his first elite start. You can read his race report here.
After standing around for a while, it was finally time for my wave to start. I got my wetsuit on and was in the water for our 7:50am start. I went to switch my watch to “chrono” mode so that I could time my race and I got a blank screen. I messed with it some more while treading water and finally came to the conclusion that it was dead. So no watch for me, which meant I would not know my split times for the swim, bike and run and have no idea what my overall time was until I crossed the finish line. I NEED this information during the race! Needless to say, I was not happy about the way my race was starting!
The horn sounded and the arms and legs started flying. Open water starts are always fun. The first 5 minutes is about survival. Just don’t swallow too much water and take all the punching and kicking in stride. I finally made it to an open patch of water and started trying to get into a rhythm. Despite having tinted goggles, when I looked up, all I could see was the sun glare on the water. I couldn’t see any of the buoys, so I just followed the guy in front of me. I made it to the turn around buoy and started to head downstream…away from the sun! This is when I finally felt like I was swimming good. I focused on my form and keeping my stroke as long as possible. When I reached the dock I started my run to T1. On the way, I heard someone say that their swim time was around 28 minutes. They had the same color cap as I did, so I knew that they were in my wave. I was hoping for something more like 25 minutes on the swim, but considering I couldn’t see for the first 10 minutes, I wasn’t too disappointed in my swim time.

The run from the swim exit to T1 was literally a quarter mile. I was glad to be out of water, but the run up the dock, through the Lady Vols Crew Boathouse, over the railroad tracks, across the street, up a grassy hill and then along the parking garage was a little much! I finally made it to T1 and had a flawless transition, which included running with my bike for about 100 yards to the mounting line!
T1 time = 4:21 (I moved up to 26th in my Age Group coming out of T1) 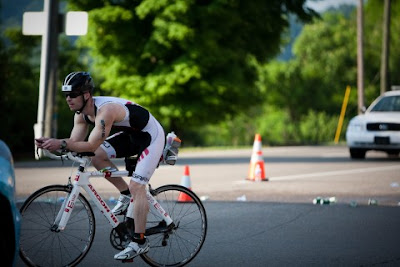 I settled in on the bike and started to navigate what is a very technical course. Lots of sharp turns heading out of town mixed with slower riders made for a hectic first few miles. I was feeling good and was passing people as usual. My slow swim meant that there were lots of people to catch…so I stated trying to pick them off one at a time. About half way through the bike I had started a little cat and mouse game with a 19 year old member of the Georgia Tech triathlon team (according to his jersey and the age on his right calf). The fact that he weighed about 50 pound less than me allowed him to pass me going up the hills and I would return the favor on the downhills. I was pushing it up the hills and never shifted out of my big chain ring. I had to stand on most of the hills and my quads were burning pretty much the whole ride. I knew that the bike was my strongest discipline, so I gave it all it had. I finally lost the kid from Georgia Tech once things flattened out with a few miles to go. I got my feet out of the pedals and flew into T2. 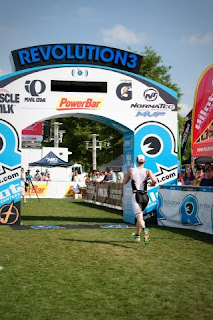 I really wasn’t sure what to expect on the run. I knew that I had asked my legs for a lot on the bike, but I was ready to suffer. The sun was higher in the sky now and was starting to heat things up. I had a gel in my hand with the intention of taking it at the turn-around. About a mile into the run I knew that wasn’t going to happen. The heat and my level of exertion meant that my stomach was not going to like that gel. So I just held it in my hand as a reminder to keep my hands and arms loose. I started the run with Jeff Miller, owner of Louisville’s triathlon store, VO2 Multisport. It was good to chat with someone for the first mile or so. He started to drop back and gave me some encouragement as I turned off of the road onto the path that took us through a state park. I seemed like it took forever to get to the turn-around. I knew that it was about the half-way point and I was focused on holding my pace until I got there. Somewhere during mile 2, I was passed by the kid from GT…he was running fast…there would be no cat and mouse on the run! I was drinking and dumping water on my back and head at every aid station to try and stay cool. I started to drink some Gatorade after the turn-around as I felt me energy fading fast. The climb back up Neyland Drive at mile 5 was brutal! It was all I could do to keep moving. I shortened my stride and pushed with all I had left. The fact that you could see the entire hill up ahead made it mentally tough. I was relieved to turn off of the road as I knew that the finish was near. I decided to empty the tank and ran the last half mile as hard as I could. The finish shoot was awesome and I heard Jessica yell for me as I approached the finish line. I was glad to be done…but had absolutely no idea what my time was because the official clock over the finish line was off (see picture above). So I did the whole race with no watch and no updates on my time along the way. I knew that I had left it all out on the course, so for once, I wasn’t worried about my time.

My overall time was 2:31:55, which is my second fastest Olympic Distance race. 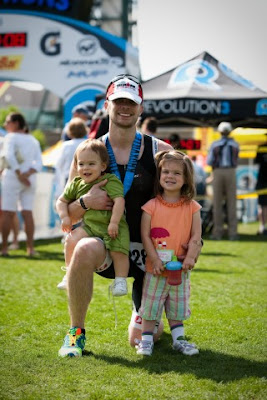 As soon as the race was over, my recovery started with a cold shower in the hotel room and compression socks for the ride home. Four days from now, I will be racing TriFest. I will do a Sprint Triathlon at 7:30am and an Olympic Distance Triathlon at 10:00am. This would be a big challenge anyway, but coming just 6 days after this Rev3 race will make it very interesting!