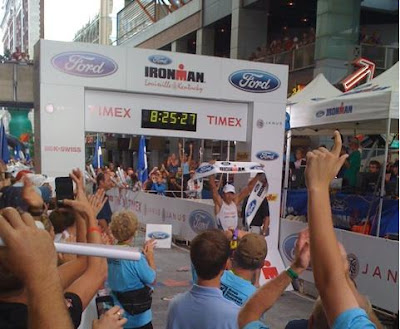 As you know if you follow this blog, I volunteered during the first few hours of the race this morning. While getting up at 3:45am wasn’t exactly fun, I’m glad I did…it was a great experience. (check out my twitter entries from this morning —>)

First thing I did was sort and box all 3000 of the athlete’s “Special Needs Bags” for the bike course. This is simply a bag that you can fill with anything that you might like to have halfway through the 112 mile bike portion of the race. We took the bags from each athlete and sorted them by bib number before placing them in large boxes that were loaded in a truck that transported the bags to the bike course. Most bags contained what you would expect – Gatorade, energy bars, fruit, PB&J sandwiches, etc. Most bags were full of way more than anyone would want to eat in the middle of an Ironman. Better safe than sorry I guess. I did come across several candy bars and even what appeared to be a can of warm German beer. Yum! FYI – last year’s winner, Max Longree only had 3 PowerBars and some unidentified pills in his bag. If I had to guess, I would say that they were either salt tablets or caffeine pills.

After all the bags were sorted and driven off into the sunrise, I moved over to T1. Pretty impressive sight to see 3000 bikes all lined up ready to go. As I stood there waiting for the pro’s to come in from the river, I heard a “pop”, then a quick “hiss”. This sound could only mean one thing – someone’s bike tire had just popped! While not common, bike tires will blow when no one is even on the bike. This can happen for lots of reasons, but most likely they were over inflated. So once I heard the noise, I had to find the flat tire. The phrase needle in a haystack mean anything? I recruited 3 other guys and I was able to find it pretty quickly. The bike tech’s on hand quickly repaired the tire and we put the bike back on the rack…the bike’s owner never knew that it even happened.

That’s the beauty of a race like this, all of the volunteers that do little things that no one ever sees. I’ve now been on both sides of a triathlon and I have a lot more respect for the volunteers now that I’ve been one. I heard 3 other tires pop during my 2 hours in T1…we found and fixed them all…doing our part to insure that someone’s months/years of training doesn’t go down the “tubes”…get it?