Most people read books while lying in bed at night, using it as a way to unwind. Training for any triathlon, much less an Ironman, takes time. During this past year, sleep has been very important to me. If I could get an extra half-hour, heck, even fifteen minutes…I would take it. So I didn’t do any reading before bed. There were still lots of books that I wanted to read, so I got creative.
I listened to books instead of reading them. I would download the book as an MP3 from iTunes and listen to it while on the bike trainer, or I would buy/borrow the audio book on CD and listen to it in the car. I also have a transmitter that allows me to listen to those MP3 files through the car stereo.
So despite having almost zero “free time” this year, I’ve been able to get through several books. I feel like I’ve made really good use of my time while driving and riding…and it’s not like there’s any good music coming out these days anyway!
So here’s a quick look at some of the books that I would recommend:
UNBROKEN
By Laura Hillenbrand

This is the only book that I listened to that caused me to sit in my car for another 5-10 minutes several times after I reached my destination. I just couldn’t wait to hear what was going to happen next. This book combined two of my favorite things, running and American history. If I didn’t know that it was a true story, I would have been irritated that someone made up such an unrealistic story. The book follows Louis Zamperini from childhood mischief, to his high school track team, then on to college, where he set NCAA records for the mile. He made it to the 1936 Olympics and competed in the 5K. Soon after that race he joined the army and was off to World War II. He was assigned to a B-24 bomber and flew numerous missions in the Pacific. I won’t ruin the story, but as if what I’ve told you already isn’t enough to make a good story, it all pales in comparison to what happens after his plane is shot down. I highly recommend this book! All I can say is that Louis Zamperini is some kind of super-human. By the way, he’s still alive – he’s 94 years old and still does motivational speaking! If you can only read one book on this list – read this one.

Scott Rigsby was the first double-leg amputee to complete the Ironman triathlon in Kona, Hawaii. This book follows his journey from age 18, when he was involved in the accident, all the way through this Ironman race in Kona. Scott was age 39 when he completed the Ironman, so needless to say, the road that lead him to compete in a triathlon was a long one. Great book for anyone that feels sorry for themselves. You think that you have been dealt a bad deck in life? After seeing all that Scott goes through, your perspective will change!
BLINK
By Malcolm Gladwell 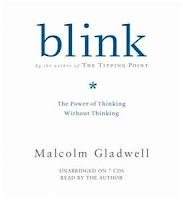 This book is one that I borrowed from my Dad. It’s not a book that I would probably pick up in a book store, but I’m glad he recommended it. This book has nothing to do with sports or history, but I found it to be really interesting. It’s about snap judgments. What your mind does in the first two seconds when you encounter a person or a situation. How does you mind make these subconscious decisions and should you rely on them. The first half of the book had me convinced that we should always trust these snap decisions that we make. Then by the time I finished it, I was convinced that these instant decisions are usually incorrect. If nothing else, I learned a lot about reading someone face. With enough studying, you can tell what someone is thinking without them saying a word. I would love to be able to do this…especially with my wife!
What the Dog Saw
By Malcolm Gladwell
Since I liked Blink so much, I decided to read another book by the same author. This book also covers lots of things that effect your daily life that you have probably never thought about. He spends a lot of time talking about a legendary pitchman. He describes how this pitchman was able to understand how humans think and feel on such a high level, that he was able to know exactly how to sell them whatever product he was pushing at the time. The book also describes how a dog trainer was able to develop the same understanding of how canines think and feel. Later in the book he goes through the events that led to the Challenger disaster and the Enron failure. Could both of these been avoided? He thinks so, and tells you why. Cool stuff!
I’m Here To Win
By Chris McCormack and Tim Vandehey

Chris McCormack is the two-time winner of the Ironman World Championship. I bought this audio book on iTunes a few weeks before I did Ironman Louisville…for obvious reasons. Although I had no illusions of winning IMLOU, I wanted to hear what McCormack had to say about the mental aspects of the race. This was a really cool book and while I knew a little bit about the author before I started this book, I learned just how talented and smart he is. He’s a true competitor in every sense of the word. He loves the mental game as much as the physical, which was key to winning his second Championship in 2010 at age 37.  He takes the reader through his entire triathlon career and even gives some interesting stats from several of his pro seasons, including miles traveled and training volume. This book could also be used as a training guide. McCormack outlines his typical Ironman training plan and gives lots of details on how to complete the workouts. Warning – his workouts are no joke. I trained hard for my Ironman, but his workouts are designed for a pro…seriously.

This book describes Dean’s journey as he completed 50 marathons in all 50 states, in 50 consecutive days. Read that sentence again. Yes, you read it right. He ran a full 26.2 mile marathon in 50 consecutive days, while traveling between states on a bus. Lots of crazy adventures in this one! Dean fights through sleep deprivation, injuries, fatigue, rain, snow, heat, mountains, desert and crazy fans. Lots of good tips in this book for anyone that runs. You don’t have to be an endurance freak to know the importance of knowing how to recover quickly, keep from cramping in the heat, eating on the go and what do you when you hit the wall during a run. Fun book to read and good motivation to get out there and run!
Born To Run
By Christopher McDougall

Some people (including me) credit this book for being the start of the “barefoot” running craze. The book is full of cool stories of endurance races, both organized and ones run by crazy athlete’s that could care less about getting recognition for their talents. I liked the adventures of the Tarahumara Indians in Mexico, Caballo Blanco and Barefoot Ted. Because I have already researched this topic myself, I was a little annoyed by the break the author took right before the best part of the book to talk about all the “science” behind running without shoes and how it’s the only way to run without injury. I rolled my eyes a few times as he talked about Harvard scientists and what they “discovered” about the human runner. It was kind of like getting mad when your favorite TV show goes to commercial right before they reveal whodunit. Either way, it was still a good book and it even had me looking up some of the characters on the internet to see what they looked like and what they were up to know.
So those are a few on the books that I got through this year. If you have read or do read any of them, let me know your thoughts.

One Response to “Books I’d Recommend”