The day before a race I typically look over the bike and run courses, print out my check list, pick up my race packet and load up on carbs. The day before this race was a little different. I started out the day sitting on the pavement with Flash laying in the road beside me…and no, this was not planned. I spent the rest of the day crossing my fingers that my bike would be repaired in time for the race the next morning. Thanks to the guys over at VO2 Multisport, Flash was as good as new by the end of the day and ready to roll on race morning. 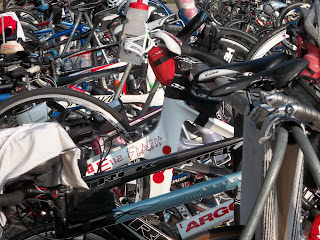 I arrived at the race around 6:45am. Despite running a little later than I like to, I was able to grab a good spot in transition…right near the bike exit. I set up my transition area and then headed down to the water to see what the swim course looked like. The swim was in the Ohio River and it was two loops of a 0.6 mile course. The first 0.3 miles were against the current, then your turned around and swam 0.3 miles with the current…then did a second loop. See that 4th buoy in picture below? That was the turn-around point. 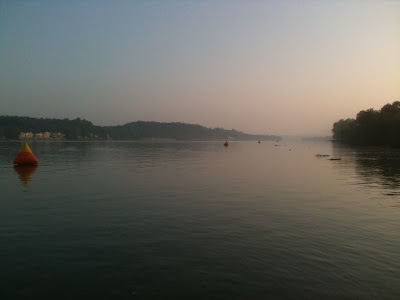 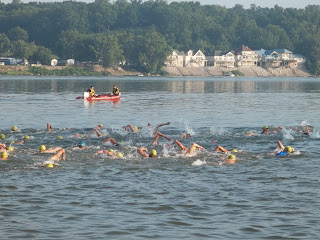 I did a quick swim to see how the water felt and it was pretty comfortable. We started in three waves. First was all males under 40 (yes, that’s me). Then the 40 and over males, followed by the women and aquabike participants. After wading in the water for a few minutes and fighting the current, we were under way. The mass of arms and legs was pretty typical for an open water race. I was kicked a few times, but nothing that messed up my rhythm too much. Once I got out away from the shore, I noticed the current fighting me. I tried to increase my stroke rate, but still felt like I was going nowhere. Once I got to the turnaround, I could tell an immediate difference. I looked at my watch at the halfway point and it was 22 minutes and some change…not good! I began to swim harder than I had planned. I could tell my breathing rate was increasing and could even feel my lungs burning, but I needed to make up some time. Unfortunately, it was to no avail. After pushing it harder on the second loop, I still ended up getting out of the water in just over 45 minutes. I was very disappointed in my swim, but knew that I had time to make it up on the bike and run. The swim exit was interesting. There were three extension ladders tied to the dock extending down into the water – you can see a guy climbing out behind me in the picture below. 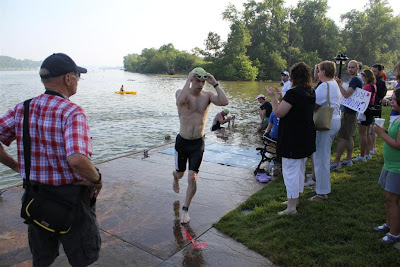 Official Swim time – 45:36.70
15th out of 28in my age group and 90th fastest swim out of 170 total
After having issues getting my feet into my bike shoes during the last two races, I decided to leave my shoes unclipped this time. I put them on in T1 and clipped in as I started to ride. I can’t imagine that it cost me too much time doing it this way. Since this was a long course race, I took my time in T1…putting on my HR monitor, tri top, socks and shoes. I try not to worry about speedy transitions in long races, it’s more about not forgetting anything. I also got to see the family as I was in T1. It’s always good to have a personal cheering section! My wife is extremely understanding when it comes to my triathlon training and racing; I’m very lucky to have her! 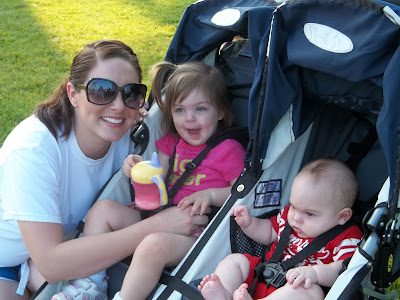 Official T1 time – 2:31.9
6th out of 28 in my age group and 73rd fastest T1 out of 170 total
I’m very comfortable on Flash these days. Spending 4-5 hours at a time in the saddle will tend to help you get this way. I know the bike inside and out…and something didn’t feel quite right as I started the 56 mile ride. It felt like something was holding me back – I honestly thought that maybe the back brakes were rubbing the wheel. I looked back and everything was spinning freely. I even noticed that going down one of the big hills I only got up to 40 mph. I’ve been clocking 43-44 mph on this hill during my training rides. I know that in addition to replacing the base bar, VO2 had to do some work on my rear derailleur and replace some cables. Were one of these adjustments slowing things down? I had no way of knowing or doing anything about it, so I just kept riding. I was taking in my fuel and keeping a close eye on my water consumption. I picked up a bottle at both aid stations and when I got back to transition I was completely out of everything, which is perfect. Somewhere around mile 40 things started to feel right again and I hammered it home, passing lots of people in the process.
I was the 58th person out of the water (including a few of the older guys and even a woman or two that made up the time difference on me). Coming back into T2, I was in 37th…meaning I passed 21 people on the bike course – this is a nice benefit to having a bad swim! My bike time was 2:54:53. The course was a little long, measuring 57.75 miles on my bike computer, giving me a average pace of 19.8 mph. Avg HR on the bike was 141 bpm.
Official Bike time – 2:54:53.20
8th out of 28 in my age group and 37th fastest bike out of 170 total 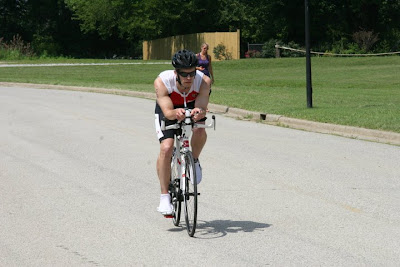 I had a pretty quick T2 since I didn’t see the need in changing my socks. I slipped my feet out of my bike shoes as I coasted in, took off my helmet, put on my running shoes and fuel belt, grabbed my hat and Garmin watch and was on my way to conquering the 13.1 miles of hills and scorching asphalt. 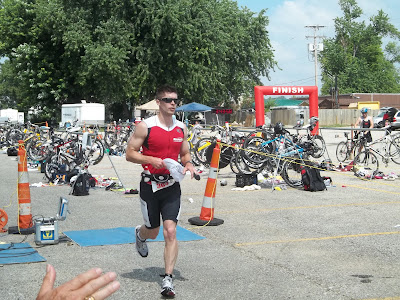 Official T2 time – 0:53.60
3rd out of 28 in my age group and 12th fastest T2 out of 170 total
I felt good coming out of T2, but as soon as I hit the first hill…let’s just say I knew I was in for a miserable run! There was a guy about 10 feet in front of me that had a “30” on his calf. This meant that he was 30 years old and in my age group. I told myself to just hang with him for the first few miles and see how I felt. I ran right behind him for about 2 miles and then I passed as he slowed down going up one of the endless hills. I drank two cups of water at every aid station and was sipping on my fuel mix when I felt the need. The hills were relentless. I only walked for a few seconds at each aid station just to get the water down, then I immediately start running again, not giving myself the opportunity to think about how good continuing to walk would feel.
I could go on and on about how difficult this run was, but I just kept my feet moving and passed lots of people walking along the way – especially on the second loop. Believe it or not, I actually found a second wind around mile 9. My last 4 miles were all under 9 minutes. I’m not sure how or why I felt this good, but it was a big boost to my confidence as Ironman grows closer. The run course actually measured a little long too, at 13.85 miles. My time of 2:06:26 works out to be an average pace of 9:07 min/mile. Avg HR on the run was 157 bpm.
Official Run time – 2:06:26.70
7th out of 28 in my age group and 43rd fastest run out of 170 total 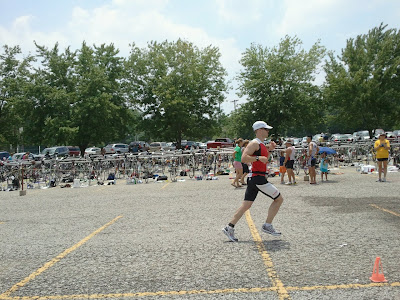 I cruised to the finish line with a total time of 5:50:22.10, good enough for 8th in my Age Group and 35th overall. After talking with other competitors, it seemed like most people were about 30-40 minutes above their average Half-Ironman times. Chalk this up to the very difficult run course and the heat. My time was 31 minutes longer than the Half I did back in May. All in all, I’m pleased with my race. I learned a lot about how to trying to stay cool during a race in hot weather (90° F during the run)- priceless information come August 28th!
Official Time – 5:50:22.1
8th out of 28 in my age group and 35th out of 170 total 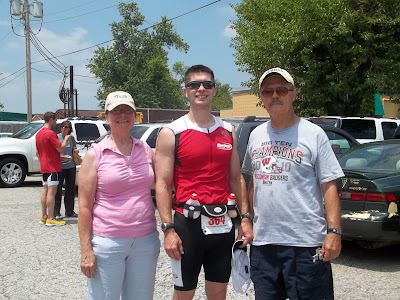 Nutrition plan worked well again. I pretty much have it dialed in now. I didn’t feel sluggish on the run and had the urge to pee during just about the entire bike and run, so I was well hydrated. My stomach started to cramp during the last few miles on the run, but I think this was due to the heat, not inadequate nutrition.