It’s summertime. It’s sunny. It’s hot. It’s humid. None of this is a news flash, but how your body reacts while exercising in these conditions may surprise you.
I download triathlon and running related podcasts from iTunes all the time. I listen to these while on my indoor trainer or driving in the car. I recently came across one that featured an interview with Brendon McDermott. Brendon has a PhD in Exercise Science with a research focus on thermal physiology, hydration, and exertional heat stroke. So needless to say, this dude knows what he’s talking about when it comes to hydration! The interview was conducted by Jay Martin, who runs a website called “Triathlon Mind Training”, where he also sells a DVD by the same name.
Staying hydrated is very key to any athlete this time of year, but especially those that have endurance events (such as IMLOU) planned that take place in the heat!  The information that I learned listening to this interview seemed important enough to share with my fellow athletes…so here goes.
First of all, let’s define dehydration. It’s the excessive loss of bodily fluids. For most people, they think that this just means sweat. While it’s true that the majority of fluid loss comes from sweat when we are exercising, we can also lose fluids through urine and respiration. That’s right, every time you exhale, you are losing fluids. This fluid loss through breathing can actually become pretty substantial during endurance events. 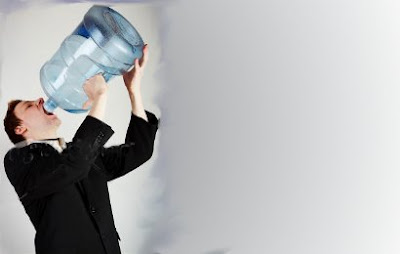 So the first step that many people take is trying to determine how much bodily fluids they lose during exercise. The simple way to do this is to weigh yourself naked before a long ride or run, keep track of all fluids that you take in, then weigh yourself naked again when you are done, adding a pound for every 16 ounces of fluid you consumed during the workout. It’s important to weigh yourself naked because your clothes will hold sweat. Just don’t use the scale that’s out in the middle of the gym! One pound of weight loss equals 16 ounces of water loss. For example, let’s say you weigh 1 pound less after a one hour run and you drank 16 ounces during the run. You lost a total of 32 ounces (16 x 2). So you should try and drink 8 ounces of water every 15 minutes while running.
Since this fluid loss rate is very individualized, don’t assume that you are the same as someone else your same size and age. It also varies depending on exercise intensity, fitness level, environment, heat acclimatization and how much sodium you have in your body at the time. So do this fluid loss test several times and get an average.
I’m sure that we’ve all exercised in a state of dehydration. It’s nearly impossible not to. Most people cannot physically take in the same about of fluids that they are losing per hour. But trying to stay as hydrated as possible is important. Even just a 2% loss in body weight due to dehydration can have some very negative effects on your performance and your brain. To find what your baseline body weight is, weigh yourself naked (yes, there’s lots of nudity in this post) first thing in the morning. As with the fluid loss calculation, do this weigh-in several days in a row and take the average. Once you get this weight, multiply it by 0.98 to get your weight at 2% dehydration. The goal should be to not weigh any less than this after your workouts. Also note that your body’s thirst mechanism kicks in when you get to 2% dehydrated. So don’t let yourself get thirsty! 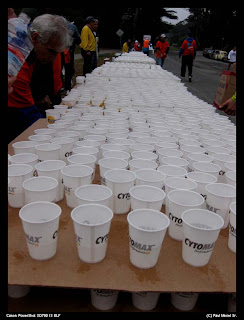 * – I suffered an IT band injury about 6 miles into this run. I’ve been doing everything I can  since then to try and get to the point where I can run on it. I’ve been using lots of ice, my foam roller, had a deep tissue massage and I’m going to see my Physical Therapist today. I’m really bummed about not being able to run right now, especially when I only have about 4 more weeks of good training before Ironman!!

One Response to “Everything You Need To Know About Hydration”