News came via a text message at 12:13am on Friday morning that the swim was cancelled due to “dangerous current” in the Ohio River. Not the best news to be see on your phone when it wakes you up in the middle of the night.
So while I was disappointed in the fact that this race was no longer going to be a full triathlon, my goals for the race were based on the bike and run legs anyway.
I woke up at 5:15am and had my standard pre-race meal – a plain sweet potato. I had almost everything already packed and loaded up the night before, so I really just had to go over my checklist one last time and head out.
I made it down to Otter Creek in a little over 45 minutes. Once I arrived, it was interesting to see everyone trying to figure out what to do. With no swim leg, there were lots of questions.
Turns out the plan was to have the bike leg start just like a time trial…one rider at a time. After some pre-race instructions regarding the bike and run course details, we were told to head up from transition to the top of the hill and get in line. I walked up the hill and found myself first in line. I knew I didn’t want to be there, so I told a few guys to go ahead of me. I eneded up starting third.
The start was a short incline, so getting my shoes clipped in the pedals was a little tricky. Once I got going, I went over my strategy again in my head. The plan was to ride based on power only. No looking at speed, no looking at heart rate, no looking at distance. My Garmin screen was programmed to show me Nominal Power (NP), 3 sec Power Average and Total Time. I wanted to keep my power in a range of 80-85% of my FTP, which works out to 215-228 Watts. The other goal was to keep from spiking my power on hills. I watched it very carefully and spent a lot more time in low gears – not the way I typically ride. No standing and mashing up climbs, no pushing it just to get over the crest of a hill. I shifted down as soon as I felt like it was getting harder. Every hill, all 56 miles, I did this. It was tough. I’m used to pushing the bike pretty hard. I’m not used to getting passed, which I was, several times. I had to keep telling myself that I was saving my legs for the run…and that I would catch some of these people then.
My NP was pretty consistent and I did my best to keep my power below FTP (269W), even on hills. I couldn’t keep it under on a couple of the hills, but I was in the lowest gear I had…so I had no other choice. The chart below shows my power for the entire ride. The dashed line is my FTP that I was trying not to exceed. 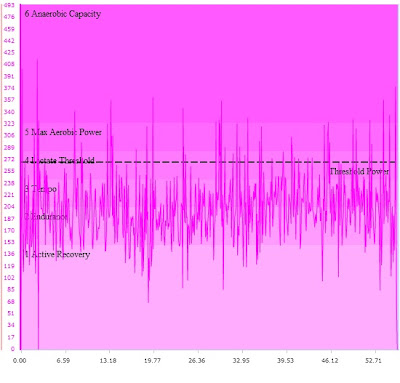 As you can see, most of my ride was done in power zones 2-3. I was watching my 3 second average power numbers to try and keep my power low on the hills. I also made sure to never coast. I shifted and pedaled hard down all the descents. You can see I had a power reading the whole time with the exception of the very beginning, once early on, and then again coasting into transition at the end.
My NP ended up being 219 watts with a Variability Index of 1.05 – which is within the 1.00-1.07 goal range. Meaning that I didn’t stray from my NP too often.
56 mile bike
2:47:52 (20.0 mph)
Nominal Power = 219W
2nd out of 6 in my Age Group
10th out of 48 Overall
I cruised into transition and racked my bike. I pulled my helmet off, changed into some dry socks (I had to pee twice on the bike), slipped on my shoes and grabbed my hat and sunglasses as I ran out.
T2
1:18:50
1st out of 6 in my Age Group
5th out of 48 Overall
My legs felt good as I started the run. This was a good sign and the whole reason I rode the bike the way I did. I started off the run with my buddy Jeremy. We ran the first mile or so together, which included an out-and-back with some brutal hills. The whole course was full of rolling hills and I was able to average 8:30 or so miles while keeping my heart rate in check. I wanted to keep it in the low 150’s and once I settled in, it was not a problem. I really didn’t feel like I had to ask my legs for more until around mile 9 or so. After that it was hard to hold my pace, but my HR never soared. The last few miles were a little slower than I would have liked, but overall, it was a completely different experience off of the bike than I had at the Half in Taylorsville back in May.
13.1 mile run
1:51:15 (8:30 min/mile pace)
1st out of 6 in my Age Group
9th out of 48 Overall
It was a good race in the fact that I accomplished all of my goals. Having the fastest run split in my Age Group is not something that I am used to…but it means that I did the bike right and conserved my legs.
Total Time
4:40:26
2nd out of 6 in my Age Group
8th out of 48 Overall

I’ll devote my next post to telling you exactly what I learned on this bike leg and how I will use this information during my Ironman race in August.
Be sure and visit all of my sponsor’s websites. I sought out these companies because they provide great products and services.
Swag’s Sports Shoes
Rudy Ellis Sports Medicine Center
Garden of Life
GreenBEAN Delivery
Meridian Acupuncture and Herbal Medicine
Earth Fare Supermarket

One Response to “Cardinal Triathlon Results”