Cycling is in my genes. My dad raced competitively for many years – both on roads and the velodrome. I even have his old aluminum-frame bike, named “Silver Shadow”. One of these days I will get around to making it road-worthy again.
When I started doing triathlons five years ago (hard to believe I’ve been at it that long), I seemed to be stronger than most beginners on the bike. Despite not being on a bike in several years, I found myself near the top of my age group for the bike split in almost every race. So I naturally gravitated toward the bike and focused on using what I considered to be my strength, to my advantage. Regardless of the race distance, I would hammer on the bike. Sure, my runs suffered, but I thought that just meant that I needed to work more on my running. I wasn’t (still am not) the best swimmer, so I would find myself having several people ahead of me on the bike course. I loved seeing someone up ahead of me on the road and making it a goal to catch them. I called them “rabbits” and I spent all of my energy catching as many as possible before getting to T2.
I raced this way for 4-1/2 years. I had some great bike splits and enjoyed looking at race results to see how many people I rode faster than. Too bad a triathlon is three disciplines. My run splits improved over the years, but they never got down to where I knew they should be. My open run times were considerably faster, and while I will never run a triathlon as fast as I can a run-only race, the difference was just too much. 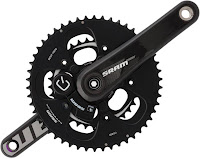 So I decided to figure out how to ride my bike smarter. Earlier this year, I invested in a power meter for my bike. I purchased a Quarq Power Meter. This crank-based meter measures the amount of force the rider applies to the pedals. As this force is transmitted, there is a twisting, or torsion within the spyder portion of the crank (the part between the right crank arm and the chain rings); the strain gauges (embedded in the spyder) measure the amount of twisting from normal. This torsion info is then sent to a microprocessor in the bike computer (or Garmin watch in my case), and converted into wattage.
So once I had the power meter on my bike, then came the hard part – how do I use this thing? It was right around Christmas time, so I put a book called Training and Racing with a Power Meter on my list. Luckily for me, it showed up under the tree. This book is known as the “bible for riding with a power meter”. It took me a few days to get into the book enough to even understand where to start. First thing was to determine my Functional Threshold Power (FTP) and find out my strengths and weaknesses (short sprints vs. endurance).
After completing the testing protocol outlined in the book, I had a baseline to start from. Now I could use the workouts described in the book to improve me weaknesses and build on my strengths. More importantly for this season, I had a FTP to work from.
I had always heard about the need to “conserve energy” for the run, but aside from just riding a little easier than I knew I could – how was I supposed to “conserve energy”? After reading the book and gathering/understanding all the data from my power meter for 6 months, I finally know how to ride “conservatively”. I also now understand that the difference between a well-paced bike leg and a poorly-paced bike leg is very small.
To demonstrate just how little room for error there is, we can take a look at the two Half-Ironman races I’ve done this year. The first was back in May. I had been riding with my power meter for several months, but still didn’t have a good grasp as to how to race with it. Here are my bike split numbers from the first race:
Distance – 56.00 miles
Time – 2:40:54 (20.9 mph)
Work – 2093 kJ
TSS – 214.5 (0.839)
NP – 229 watts
VI – 1.06
EF – 1.55
Elevation Gain – 2211′
Avg HR – 148 bpm
Avg Cadence – 80 rpm
So what does all of this mean? The most important numbers to me a year ago would have been the average speed and average heart rate. My goals for a half-Ironman used to be to go as fast as I could while keeping my heart rate in zone 2 / low Zone 3, which for me is between 135 and 145 bpm. Now, neither of those numbers are important to me. I now focus on Normalized Power (NP) and Variability Index (VI).
Normalized Power is different than Average Power in one key way – it accounts for variability (wind, uphills, downhills, quick accelerations, long steady grinding/mashing, etc.). To account for these variables, an algorithm is used to calculate an adjusted (normalized) power for each ride. To simplify it, NP is the wattage you would have averaged if you had pedaled smoothly for the entire ride – the power that your body “thought” it was doing, though in reality the effort could have been very sporadic. NP simply provides a better measure of the true physical demands of a given ride than average power.
Variability Index analyses how smooth or consistent a riders power output was during a ride. A smooth/consistent ride in regards to power will reduce fatigue and pay huge dividends on the run. The closer the VI is to 1.00, the better. The goal is to keep it under 1.07, which means that the rider did a good job of pedaling smoothly for the entire ride and limited surges.
Here is a power graph from that same ride back in May. 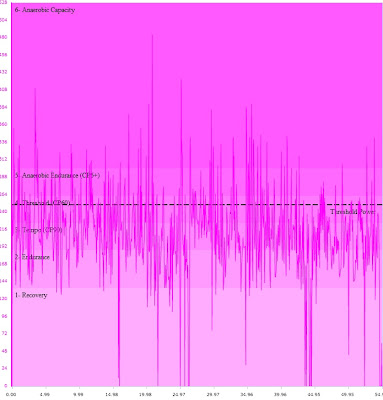 Threshold Power (FTP) is the horizontal dashed line. Look how many times I exceed it during the race! During this race, every time that I encountered a hill, I would stand up and push to the top – spiking my power. Turns out, this is a big no-no. I was “burning matches”. Each rider has a limited number of matches to burn. Once you burn them all, your chances of have a good finish or a solid run to finish out a triathlon are zero. I consider it “burning a match” anytime I go above my Threshold Power by 15-20% for more than a few seconds. So if you look at the graph from the race in May, I burned LOTS of matches. Which resulted in a very slow, painful run split of 2 hours and 21 minutes (10:45 minute/mile pace).
The second Half-Ironman I did this season was just a few weeks ago. Leading up to this race, I had a much better handle on how to properly pace my ride. I calculated that I should maintain a NP of 80-83% of my FTP for the entire 56 miles. This translates to 215-223 watts. I also promised myself that I would not stand up on the hills – in an attempt to keep my VI low. It wasn’t easy, I wanted to push it harder, but I didn’t. Here are my bike split numbers from the second race:
Distance – 56.00 miles
Time – 2:47:55 (20.0 mph)
Work – 2109 kJ
TSS – 185.3 (0.815)
NP – 219 watts
VI – 1.05
EF – 1.66
Elevation Gain – 2026′
Avg HR – 132 bpm
Avg Cadence – 84 rpm
So as you can see, my overall time was slower than in the first race. In the past, I would have looked at this as a negative and said that I had a better ride in the first race. But if you look at the numbers that really matter in a triathlon, this second race was much better. My NP was right where I wanted it to be. My VI was good, my average HR was much lower and my cadence was higher…all things that should translate to a better run off the bike. Compare this graph to the one from the first race – notice how few times I spiked above my Threshold Power in this race versus the first? 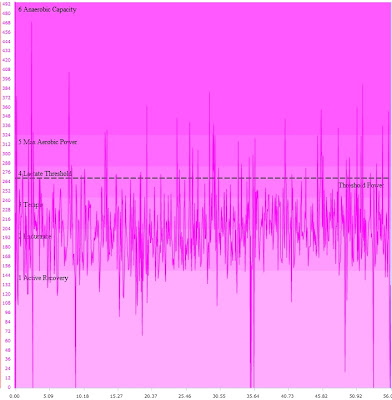 So did it work? Were my legs fresh coming off of the bike? Yep! My run split for the second race was 1 hour and 51 minutes (8:28 minutes/mile pace) – a full half an hour faster than the first race and a PR for the run split of a Half-Ironman. So I lost 7 minutes on the bike, but gained 30 on the run…seems like a good trade-off.
So now I have a very specific definition of what a good ride is – and it’s a much better and more accurate definition than I used to have!
I will use this same strategy for Ironman Louisville next month. My bike split may be slower than it was last time I did the race, but my run split should be much improved…and more enjoyable!
Be sure and visit all of my sponsor’s websites. I sought out these companies because they provide great products and services.
Swag’s Sports Shoes
Rudy Ellis Sports Medicine Center
Garden of Life
GreenBEAN Delivery
Meridian Acupuncture and Herbal Medicine
Earth Fare Supermarket

One Response to “Changing the Definition of a Good Ride”