There have been numerous studies over the last few years that focus on “digit-ratio”. All of these studies involve the length of your index finger (2D) vs. the length of your ring finger (4D). In women, the length of both fingers is usually equal. In men, the ringer finger is usually slightly longer.
No that you’ve examined your finger lengths (you know you did), I’ll tell you what the research has shown. 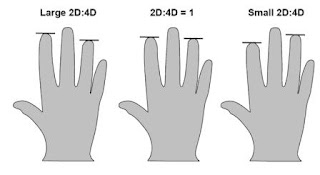 Apparently, our fingers hold information about how much testosterone and estrogen we were exposed to in the womb. So, the longer one’s ring finger relative to one’s index finger (small 2D:4D), the more testosterone you had. And that testosterone has an effect on the brain, and on the body. If a boy has an increased amount of testosterone before birth, he is likely to be born with a very efficient heart and vascular system.
A few of these studies even looked at fetuses as early as nine weeks gestation and found that the ratio was already established and did not change…even through puberty. 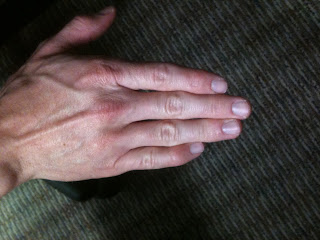 Another researcher found that men with smaller ratios also had higher mental toughness, optimism and aptitude towards sports.
Some people are even starting to look at finger lengths of young people in an attempt to predict future athletic ability. I’m sure there are some coaches out there somewhere that are already sneaking a peek at a recruit’s hands.
Some of these studies even related one’s sexual preference, musical abilities, and the likelihood of having autism or getting cancer to their digit ratio…but I won’t go into any of that here.
Think I’m making this stuff up? Do a quick internet search for “index and ring finger length” and see what you find!
So the good news for me is that my ring finger is indeed longer than my index finger (see picture to the right).
All of these studies are quick to note that simply having a relatively long ring finger does not necessarily guarantee either talent or success in sports. Many, many other factors play important roles in developing your full potential.
So there’s your conversation starter for those awkward moments around the Thanksgiving table!