It came to my attention last week that the company I work for was one of the sponsors for a little 5K here in Louisville. So even though I’m not exactly in shape to run a 5K (been training for endurance races for over a year and I’m still about 10 pounds heavy), I’m going to lace up the shoes in the morning and run 3.1 miles.
The race is called the Santa Sprint. Although I can’t find a map of the course, it’s described as being “flat”…which would be nice. The race runs along historic Frankfort Avenue in the Crescent Hill and Clifton neighborhoods and is celebrating it’s 16th year. 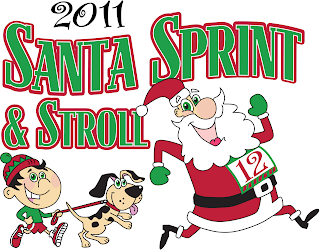 Proceeds from the race go to United Crescent Hill Ministries. UCHM is a community outreach group that offers programs for youth and seniors as well as providing for the underprivileged on Thanksgiving and Christmas. If it wasn’t for this great organization and my company being a sponsor, there’s no way I would be doing this race…I’m definitely not feeling fast!
Depending on the weather, I may or may not be pushing my 2-year old in a stroller. If I do, I have no clue what my time will be. If it’s too cold and I end up running solo, I’d like to break 22 minutes…a far cry from my 20.03 PR.
In other news, the dates for the spring Shelbyville Triathlon Series have been released. The four-race series will take place on January 29th, February 19th, March 25th and April 15th. I usually just do one of these races, but this year I’m planning on racing all four. Riding outdoors in January and February should be interesting!

One Response to “Santa Sprint 5K”