to Triathlon! It all started back in 1974, in Mission Bay, California. The idea was conceived by Jack Johnstone and Don Shanahan. In 1973 Jack competed in the second annual “Dave Pain Birthday Biathlon”. Which consisted of a 4.5 mile run followed by what was billed as a quarter-mile swim (the actual distance was between 200 and 300 yards). Jack loved the race and wanted to do more of them…but there wasn’t any other events like this, so he started to plan one.

He conceived a run-swim biathlon with equal emphasis on the two disciplines, and several alternate legs. The initial run could be done in racing shoes, but subsequent running legs would have to be barefoot on a suitable surface (grass or sand). The Fiesta Island area of Mission Bay, where the Dave Palin race had been staged, was almost perfect. He designed a course, then called Bill Stock, the San Diego Track Club Calendar Chairman, and told him of his plans. He said he would put it on the calendar, but the rest was up to Jack.

As an afterthought, he suggested that Jack call Don Shanahan, who also had some strange event in mind. Bill wanted them to combine their ideas so there wouldn’t be too many “weird” races on the schedule. Jack called Don and he told him that he wanted to include a biking leg. Jack wasn’t too thrilled with the suggestion, having never cycled competitively (he didn’t even own a bike). But what the hell, he thought, let’s go for it. Theye decided to call the event the “Mission Bay Triathlon”.

Here’s the ad that ran in the track club newsletter:

The First Annual Mission Bay Triathlon, a race consisting of segments of running, bicycle riding, and swimming, will start at the causeway to Fiesta Island at 5:45 P.M. September 25. The event will consist of 6 miles of running (longest continuous stretch, 2.8 miles), 5 miles of bicycle riding (all at once), and 500 yards of swimming (longest continuous stretch, 250 yards). Approximately 2 miles of running will be barefoot on grass and sand. Each participant must bring his own bicycle. Awards will be presented to the first five finishers. For further details contact Don Shanahan (488-4571) or Jack Johnstone (461-4514).color = yellow>

I find it funny that they had to include the part about bringing your own bike. I also find it interesting that they didn’t do just the three “legs” that are now common. They ran, swam, biked, ran, then swam again. This seems a lot harder than the way it’s done now. The first Mission Bay Triathlon was competed in by 46 athletes and won by Bill Phillips with a time of 55 minutes and 44 seconds. Jack Johnston came in 6th, with a time of 1 hour, 2 minutes, and 18 seconds. 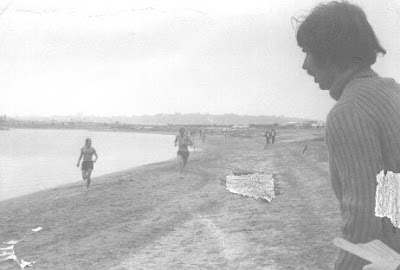 Picture is of Don Shanahan directing runners during the first ever “triathlon”.