There are six organized bike rides that travel along the Ironman Louisville bike course. I joined in on one of these rides, which took place this past Saturday. When I say organized, I mean that there is someone (his name is Bob Baney) that designates a time and location for everyone to meet. He also sets water/aid stations up along the course to better simulate race conditions. Needless to say, the dude is awesome.
The ride this past weekend had three options. A 60 mile, 80 mile and full 112 mile course. My training plan called for a 80-90 mile ride, so I decided to do the 80 miler. The good thing about the 80 mile course that you get to ride every mile of the actual Ironman route. The full 112 mile course starts off with 17 or so miles of fairly flat roads, taking you out of downtown Louisville. Then you do a very hilly 10 mile out and back. Then it’s just another 3 miles before you do two 30 mile loops of rolling hills through LaGrange, KY and some great farm country. For all the details, check out the official map here. The 80 mile ride that I did Saturday simply skipped the second loop, so I was able to ride the entire course in only 80 miles. 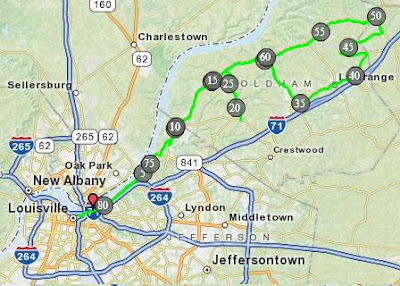 I was expecting to have a pack of at least 2-3 other riders that I would be doing the entire course with, but within the first mile I realized that wasn’t going to be the case. I let about half of the thirty or so riders that were participating go before I joined in. I was cruising along around 16 mph but was quickly passing everyone. I knew that I wanted to do the entire ride at or near aerobic threshold, so riding at an easy pace wasn’t going to work for me.
Before I knew it, I was out in front of everyone else. About 30 minutes in, I had to stop at a stoplight and was caught by one other rider. I rode about twenty feet behind him until we hit the first aid station at mile 27. We both stopped, I refilled my water bottle; he started snacking on some fruit and a Clif bar – so I headed back out on my own. This was the last that I saw of anyone. While I don’t mind riding solo, it wasn’t what I was expecting. 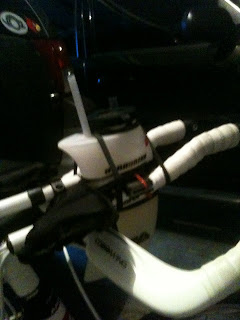 Earlier in the week, I installed my new Profile Design Aerodrink system on my bike. This water bottle installs between my aerobars, so that I can take a drink without having to move – pretty cool. I filled this bottle with clear water and had Hammer Perpetuem in my two bottles mounted behind my seat. I started with one of them mixed with water and the other contained just the powder, so that I could add cold water to it once the first one ran out. I put enough mix in each one to last three hours. I was only planning on being out there a little over four hours total, so between this and the 5oz of gel that I had in my flask, I had more than enough nutrition.
The next aid station was set up somewhere around mile 40…I missed it. I ran out of water around mile 42. I still had a little Perpetuem in my first bottle and fortunately, I had filled up and mixed the second bottle at the first aid station. So the only liquid that I had from mile 42 until I hit that first aid station on the way back at mile 61 was the Perpetuem mix…which I could only sip if I wanted it to last. On top of that, I lost my gel flask somewhere on the out-and-back between miles 17 and 27 – after taking only 1oz of the gel. So while I was pissed about losing the flask and missing the water stop, I knew that I had enough Perpetuem to get me the calories I needed. I was definitely getting thirsty (very bad sign) when I hit the aid station. I filled everything I had with ice cold water and hopped back on quickly to finish out the 20 or so miles I had left.
Ever since the Taylorsville Half-Ironman race a few weeks ago, I’ve been experiencing intermittent pain in my right glute (insert “pain in the ass” joke here). It comes and goes when I run and while it’s nothing that I can’t run through, it has the potential to become a big problem. I’ve been working with my Trigger Point foam roller at night, trying to loosen things up…without much success. About two hours into this ride, I was standing up, mashing up a hill and I felt a sharp pain. It’s the first time that my glute has hurt on the bike. It was a dull pain for the rest of the ride. It wasn’t uncomfortable, but any time that I tried to push it hard, I felt it. I think a trip to the Rudy Ellis Sports Medicine Center is on the schedule this week!
Overall, the ride was a success. Temperatures were in the mid 80’s with no rain in sight. Despite the fact that I missed one of the aid stations, being able to refill on water twice was a huge help. It’s really hard to pack enough water and nutrition on your bike for a ride this long. Here are my stats for the ride:
82.26 miles in 4:22:50
Avg Speed = 18.93 mph
Max Speed = 43.39 mph
Avg HR = 132 bpm
Max HR = 160 bpm
If you are doing Ironman Louisville and would like more info on these group rides (will also include swims and runs as we get closer to the race), leave a comment or send me an email and I’ll get you the details.
I’ve been experimenting with different types of sunscreen and being out in the sun for more than four hours helped me find yet another sunscreen that DOESN’T work! I have a tan line on my arm from where my watch was, despite putting on a thick coat of water/sweat-proof SPF 50 before I left. I did some research when I got home and I think I found one that will work (fingers crossed). I ordered a bottle; I’ll let you know the results in a future post.