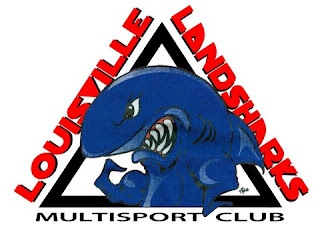 This weekend will mark my final triathlon for the 2012 season. After racing nearly every 3 weeks since the beginning of the year, I’m excited to get back out there – it’s been a whole 6 weeks since my last race!
The Landsharks Triathlon is an Olympic distance race (1500m swim, 40K bike, 10K run) on a very hilly course. The race is called “Landsharks” after our local multisport club, The Louisville Landsharks. I’ve been a member of the club for three years now and have served on the Board of Directors for the last two. With close to 250 members this year, we are one of the largest clubs in the region. The club is full of awesome people that compete at all levels of triathlon (from rookies to pros). We have socials every month and lots of group workouts to keep each other motivated. If you live in the Louisville area and are not a member…what are you waiting for? Follow the link above to get more info on the club.
Alright, enough of my sales pitch…back to this weekend’s race.
To say that I’m familiar with this course is an understatement. By my count, I’ve done one Sprint, three Olympic and two half-Ironman triathlons on this course. The swim is in Taylorsville Lake, which should be a very comfortable temperature. The out-and-back bike goes a few miles through the state park and then out onto the main road. It’s basically one hill after another. The run also follows an out-and-back route that goes off pavement onto a gravel/dirt road before turning around.
I would like to finish the season on a high note, but considering that I’m coming off of a vacation, I’m about 5 pounds over my typical race weight (thanks to the vacation), and my training has been all over the place lately – I’m just going to go out there and have fun. My previous Olympic distance times on this course are 2:56, 2:35 & 2:29. So I’d be happy with anything in the 2:30 range.
I mentioned that I was on vacation recently. My wife and I took a “babymoon” to Indian Rocks Beach (Tampa/St. Pete) this past weekend (Fri.-Tues.). We had lots of fun relaxing and eating! I attempted to get in a few workouts while we were there, but had minimal success. With 25-30 mph sustained winds coming off of the Gulf, I learned a few things. 1) Running with the wind at your back is fun. 2) Having to turn around and run with the wind in your face is not fun at all. 3) Trying to swim in the Gulf of Mexico when there is a rip current warning is a bad idea. I my defense, I didn’t know about the rip current until after I got out of the water. Here’s a video of what it looked/sounded like:
The winds died down enough for me to get in a swim on Monday. I’ve never done a triathlon that started on a beach, but fighting the waves going out and then doing “dolphin dives” coming back in to the beach would be an added adventure…not to mention the 3-4 foot swells that make sighting difficult and the salty taste that it leaves in your mouth! I have a new appreciation for anyone that does a race in these conditions! The water temperature was also 85F…which is way too warm to swim any distance in!
I also got in a good 6+ mile run on Monday with minimal wind. I saw a dolphin swimming in The Narrows and ran the last mile on the beach…now that’s definitely something that I don’t get to do often! Here’s a map of my route. Awesome views! 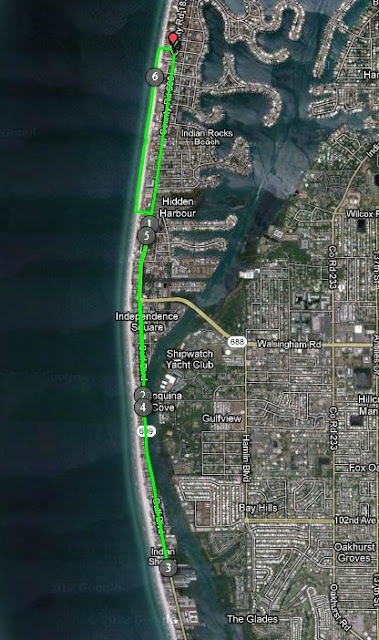