I wasn’t there, so I’ll just give you what someone that was wrote…

Craig Alexander ran down Chris Lieto in the last 5 miles to capture his second straight world title, the first man to repeat since Tim De Boom in 2002.

He crossed the finish line at 8 hours, 20 minutes, 21 seconds – greeted by wife Neri and daughter Lucy, 4, who was more impressed with her father’s pretty lei than his world champion title.

Alexander, 36, joined three other men in repeating as Ironman World Championship and did it in dramatic fashion. In addition to De Boom, Dave Scott and Mark Allen have back-to-back wins.

The Australian conquerer was back 12 minutes off the bike, but surged to victory with a blistering 2:48 marathon.

“It was so hard today,” Alexander said. “The beautiful thing about this race is that every time you race here you learn something about yourself.” The start saw two men take the early lead – Americans John Flanagan and Andy Potts, who suffered a nasty bike wreck just weeks ago and who dedicated his race to his “nana,” who passed away two months ago, and for his father-in-law, whose funeral was Saturday. 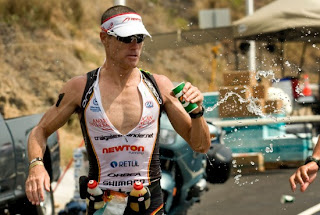 That early lead was quickly erased as up to 20 men bunched together, before Lieto zipped out front.

McCormack couldn’t capitalize – even slowing to a walking pace for spells – as Alexander and Germany’s Andreas Raelert pushed each other and ground into Lieto’s lead.

Alexander finally made his move around the Natural Energy Lab, pulled away from Raelert and set his sights on Lieto.

He gnawed away at Lieto, who just couldn’t fight back and had to settle for second.

Raelert, an Ironman rookie, wound up in third place and McCormack clocked in fourth. Fifth place went to another rookie, Denmark’s Rasmus Henning, who had surgery within the last month to fix a broken hand.

On the womens side the incredible Chrissie Wellington Express wrote a new chapter in triathlon history by taking down the 17-year Ironman Hawaii race record held by eight-time winner Paula Newby-Fraser with a dominating 8:54:02 that outpaced runner-up rookie Mirinda Carfrae by the Paula-esque margin of 19:57. While Wellington surrendered her year-old run record to Carfrae’s blazing 2:56:51 marathon, she upped her Ironman-distance win record to a perfect eight-for eight and took her third straight win at the sport’s crown jewel, the Ironman World Championship in Kona.