During the swim and run legs of triathlon, you are relying strictly on your body. If you’ve trained and fueled yourself (aka your machine) properly, you should be able to complete the race. The bike portion is a different story. It’s the only stage in which you rely on something other than your body’s ability to accomplish your goal. All the training in the world can be for nothing if you have a serious mechanical failure on your bike. That’s why having a reliable bike that is well maintained is so important.

Other than God-given ability, there isn’t much that causes triathlete’s to envy one another…except for bikes. Walk around any triathlon transition area and tell me that you don’t want to upgrade your bike and/or it’s components. You tell yourself that with a more expensive bike, you could be so much faster. While this may be true to some extent, a fast bike can only help you so much…the motor that powers that bike is where the real speed comes from. I’ve spent the last two race seasons longing for a triathlon bike. I’ve been on a road bike since I started triathlon’s back in August of 2008. While I loved and took very good care of “White Lightning”, she just wasn’t cut out for the grind associated with training and racing long-course triathlons.

So after my final race last year I decided that I would start looking for a new bike. I had a bike fit done, which you can read about here. Based on this fit, I started to price some bikes that would work well for me. I landed on the Argon E-112, Size M. Looks were not a factor for me, I just wanted the best bike I could get for speed, power and comfort….but I have to admit, it’s a sexy bike!

I ordered the bike from VO2 Multisport here in Louisville and they did a great job of letting me choose what components I wanted before they placed the order…making this truly a custom bike, built just for me. Special thanks to Peter at VO2 for building this machine!

Here’s a deeper look at the bike and some of the components:

The bike frame itself is made from a high modulus carbon and amazingly weighs only a little more than 3 pounds. It’s not the lightest bike on the market, but compared to what I’ve been racing, it’s a feather! The Argon is known for it’s stiffness. Most of this stiffness comes from the carbon fiber fork that is designed to reduce road chatter while still giving you maximum control. I haven’t had this bike out on the road yet, so I’ll report on how stiff it actually is later. This bike also has the cables run through the frame, which is very common for tri bikes, but something that I didn’t have on my road bike. The most unique feature of the Argon is it’s frame shape. Most triathlon bikes use an airfoil shape, but Argon bikes use a diamond shaped tube. Whether or not this shape is an advantage when it comes to aerodynamics is debatable, but in the long run, aerodynamics is only a small factor in how fast you actually go. For the controls, derailleurs and cassette I went with SRAM Force. SRAM is without a doubt the leader in the industry when it comes to components. They offer four basic grades: Apex, Rival, Force and Red. After reading lots of reviews and studies, and a brief education from Jeff at VO2, I went with Force. The Red is their Pro series and while it’s undoubtedly the best they offer, it’s also VERY expensive. The Force components offer a lot of the same features as the Red at a much more affordable price.
In my mind, the most important components on a bike are the front and rear derailleurs. Cheap derailleurs can be very frustrating, I know first hand. There’s not much worse than a bike that you can’t get to change gears when heading up or down a hill! This morning was the first time that I road my Argon for any length of time and with the exception of dropping the chain (which was my fault), the gear shifting was very smooth through all 20 gears. 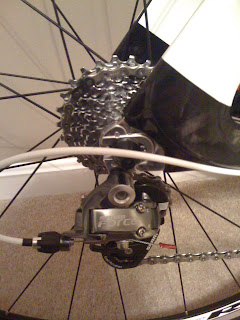 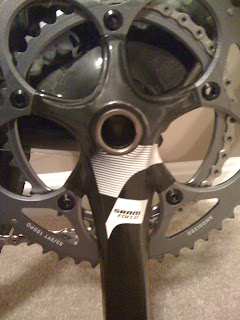 Another thing that I was really looking forward to with a tri bike was the aerobars. I went with the Profile Design Cobra Wing base bars and the T2 Plus Cobra aerobars. There’s not much to say about these bars, other than the armrest are very comfortable. 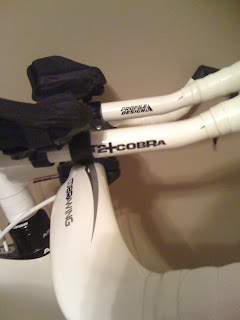 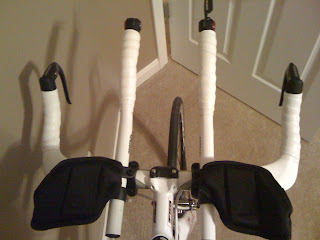 My road bike had a very hard seat. While it was uncomfortable, I got used to it. My longest ride was around 3-1/2 hours on this seat. My Ironman training will require some rides at least twice this distance…so I decided to invest in a more comfortable seat as well. At the suggestion of Rick at VO2 Multisport, I went with the Profile Design Tri Stryke Ti saddle. It features a cut-away vent to keep my underside cool and dry and has lots of gel padding making long rides more comfortable. It’s no lazy-boy, but it’s the best you can get on a bike. 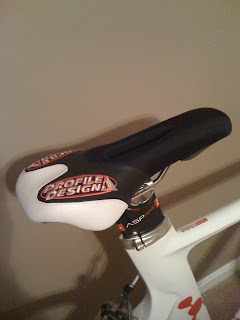 The wheels are made by Fulcrum. Both the front and back are their Racing 7 clincher wheel. The rear wheel features their 2:1 technology that eliminates the flex in the wheel from rotational forces when you push the pedal. At first this seemed like some bogus marketing, but after reading more about it, I think it’s legit. I am an Engineer after all. 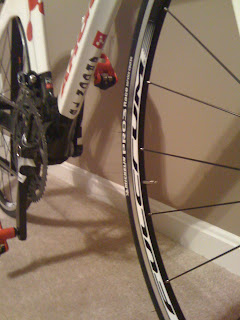 For the pedals, I went with LOOK. I also decided to trade in my mountain bike shoes and got some Shimano SH-TR31 triathlon bike shoes. The pedals and shoes give me a much bigger platform to transfer power. Rick at VO2 also did a shoe fit for me, adding in some inserts that make my feet level and keep my lower leg in alignment for optimal power transfer – cool stuff!!

I also bought a Profile Design double bottle holder that mounts to my saddle. I had the same double-bottle design on White Lightning and loved it, so I went with it again…in white this time, of course.

I decided to go all in and went ahead and bought an indoor trainer too. I did my research and landed on a CycleOps Fluid 2. While riding the stationary bike at the gym is a good workout, getting to spend time on my actual bike during the winter months will be very beneficial come spring and my first race. The CycleOps trainer uses a silicone fluid to simulate road resistance. I spent two hours on it this morning and it actually feels like you are riding on the road.

So here’s a picture of my whole set-up. 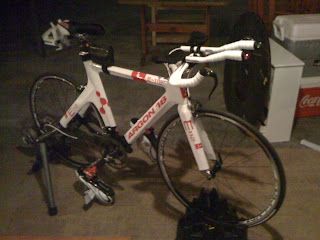 Now I just need to come up with a name for this beauty….