Let me set the scene: I’ve got less than a mile to go on my run this morning. I feeling good and I’m running at a pretty good pace. I’m annoyed that my RunKepper App is not working, but all in all, it’s been a good run.

Side note: I see people walking their dogs most mornings now that it’s not 20 degrees out at 6:00am. I also get barked at from dogs behind fences. If you followed this blog since last summer, you know that I had a Jack Russell chase me on my bike nearly every Saturday morning. Dealing with dogs is part of running/walking/riding. My dad takes dog treats with him on his walks to appease any strays that try to start trouble. I love dogs, but we all know that not all dogs are friendly!

So back to my run this morning. I see a lady up ahead with two dogs, both on leashes. There’s a little one, some sort of fluffy lap dog, and a larger one, some type of Bull Terrier if I had to guess. As I get closer to her, both dogs notice me and start to bark. She’s holding both leashes in one hand and both dogs are pulling to get at me. Just as I pass her, I hear “No Snoopy, No!”. At the same time I hear the sound of a dog running with a leash dragging behind. Snoopy (the Bull Terrier) was coming for me…and he was pissed! 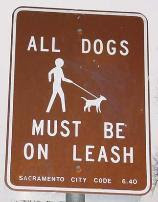 I had two choices, take off in a sprint and try to outrun the dog, or stop.  I’m no expert, but I know that A)running from a dog will only make them want to chase you more, and B)I can’t outrun this dog. So I stopped, faced the dog and waited.

He ran right up to me and was barking and showing his teeth. I didn’t look him in the eyes (another tip I picked up somewhere along the way), but I didn’t take my eyes off of him either. He was down in an aggressive squatting stance staring at my shin, looking like he wanted to take a bite! Finally, the owner caught up and grabbed Snoopy by the collar and pulled him away from me. She was apologizing profusely, but I didn’t respond. What I felt like saying was “if your dog is too strong for you to control, you need to get a smaller dog!”. I just turned around and started running again.

It turned out to be no big deal. The only thing hurt was my tempo during that last mile. When I run in more rural areas, I’m always looking to see where the closest tree is that I could climb if some wild animal gave chase (seriously, I do this). But I never really thought about having to do the same while running behind the St. Matthew’s Mall!

Swam for 24 minutes. Lots of drills, covered around 1056 yards.
After a warm-up, I did about 15 minutes at what I would consider “race pace” and I couldn’t help but notice that the girl in the lane next to me was swimming MUCH faster than I was. I’m not the fastest in the water, but I typically hold my own with other swimmers in the pool. We both finished up at the same time and I made a comment about how fast she was. Turns out she swam in High School and then went to Missouri on a swimming scholarship. I don’t feel nearly as slow after finding out this little tidbit of info!