Something’s a little off. I’ve had a week full of bad workouts. My times for the sprint triathlon last weekend were not bad considering my condition, but every workout I’ve done this week has been horrible. In order to try and rectify things, I only ran once and biked once this week, while hitting the pool a few times more than normal. I also skipped my weight lifting sessions in favor of getting an extra half-hour of sleep each day. Despite all of this, I still feel tired and weak. I’m not really sure what’s going on, but if things don’t improve next week I’ll have to start digging a little deeper.

So it’s with all of that positiveness that I head into tomorrow’s Papa John’s 10 Miler. This is the 13th year for this race, but it will only be the fifth time that I’ve participated. Here’s a look at my previous results:
2001 – 1:23:33
2009 – 1:23:23
2010 – 1:17:35
2011 – 1:14:00
As you can see, I’ve managed to improve each time I toed the line. This is my favorite road race because of the course. I takes you past Churchill Downs, the University of Louisville, down beautiful Southern Parkway and through Iroquois Park – which includes some pretty good hills. I grew up right next to the park and used to include Southern Parkway and the hills of Iroquois as part of my normal routine. Where I live and run now includes some decent hills, but nothing like I will see tomorrow in Iroquois. 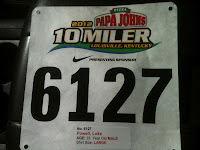 I would normal feel pretty good about breaking 1:14 and setting a PR, but given the week that I’ve had, I really don’t know what to expect. I’ll take the first few miles pretty easy, push it on the hills (miles 3-6) and then see what I have left when I come out of the park for the last 4 miles.
My bib # has my lucky number “6” in it…which usually results in a good race. So I have that going for me.
No matter how the race goes, as soon as it’s over, my attention will shift to the UofL basketball game. Actually, the race is an afterthought – my thoughts have been on this game all week. They are playing in the Final Four tomorrow night at 6:00. HUGE game…which I’m more nervous about than the race – which should tell you a lot about how big this game is!
Go Cards – beat Kentucky! 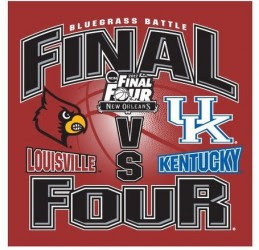