Two weeks ago I was in Scottsdale, Arizona for a work-related sales meeting. I knew that the weather was going to be nice out there and since I needed to get in a long run, I decided to pack my running gear. I did a little recon the night before and found a nice little loop that was just under 4 miles. I woke up early (5:00am) the next morning so that I could get in a good long run and still make it to the 7:30am meeting. I took my “long distance” shoes with me. I reserve these shoes for runs over 8 miles and I had only worn this particular pair three times.
I’ve worn Asics GEL-Foundation shoes for long runs for the last 4 years. When I went to Swag’s to get a new pair back in February, I was disappointed to learn that Asics no longer makes these shoes. The “replacement” shoe is the Asics GEL-Forte. The shoe has lots of differences, including a smaller heal-toe drop and less overall cushioning. I didn’t think it would be a big deal, but each time I ran in the new Forte’s I had some sort of foot pain during and/or after my runs. My arches hurt one time, the top of my feet another. It had been about a month since I had worn them, so I decided to give them another try in Scottsdale.
I ended up doing 3+ loops and getting in just over 14 miles (the weather was perfect – mid 50’s with no humidity). My feet felt good during the run, but almost immediately after I was done, I started having pain in a really weird spot…the outside edge of my left foot. It was bad enough that I was limping from my room to the meeting. It hurt the rest of the day and then on and off for the whole next week. It didn’t hurt when I first woke up, so I actually ran two mornings last week. One day was speed work on a track and the other was short hill repeats – so they were short workouts, but my foot felt pretty good during the runs – but then started hurting as the day went on.
I knew that the new shoes were not going to work, so I took them back to Swag. Lucky for me, they somehow had a pair of GEL-Foundations left in my size. They weren’t there when I bought the Forte’s, so someone must have returned them. I can’t tell you how happy I was walk out of there with a shoe that I know works for my feet. I’ll be able to run in these the rest of this season and then I’ll have to reassess my options for a distance shoe.
So even after taking 5 days off from running, the foot pain was still there. I stopped in to see Kevin at Rudy Ellis Sports Clinic yesterday to get a diagnosis. I had attempted a self-diagnosis (never a good idea) and feared that I had a unique kind of stress fracture known as a Jones Fracture. After checking me out, it seems as if I have a case of Peroneal Tendonitis (a lot better than a stress fracture). Most likely caused by a change in my running gait by wearing the new shoes in combination with a mild ankle sprain about a month ago. The dull pain on the outside of my foot in the midfoot area was caused by inflammation of the Peroneal Brevis Tendon. This tendon runs along the outside edge of your foot and attaches to the base of the fifth metatarsal, the long bone the runs from your midfoot (where the bone sticks out) to the base of your little toe. This tendon, along with the Peroneus Longus, help stabilize and support the foot and ankle. 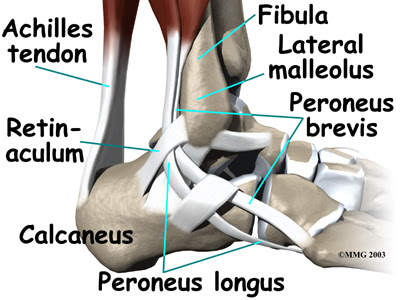 So where do I go from here? The pain is pretty much gone at this point. I don’t feel it at all when walking. I will go for a short run tomorrow and see if it comes back. I have the busiest part of my race schedule coming up in the next 6 weeks, so I don’t want to rush back and be nursing an injury between races. If the pain is still there tomorrow, I’ll most likely back out of the the half marathon I have scheduled for Saturday. As you can see, I have lots of races coming up…
Saturday, April 27th – KDF miniMarahon (13.1 miles)
Sunday, May 5th – Rev3 Knoxville Triathlon (Olympic Distance)
Sunday, May 19th – TriFest Triathlon (Half-Ironman Distance)
Saturday, May 25th – Buffalo Trails Triathlon (Modified Olympic Distance)
Sunday, June 2nd – Southern Indiana Triathlon (Olympic Distance)
So that’s 5 races in 36 days! It may be a little much, but these shorter races will be good for my fitness…and the Half Ironman will be a good measure of my endurance.
Let’s hope the tendonitis stays away. Fingers crossed!