It’s January, which is when most triathletes are enjoying their off-season. It’s the perfect time of year to work on your swim stroke and get in some good miles on the bike trainer while watching some movies or sports. For me, it’s the perfect time of year to get back into racing. I haven’t been in a race since I crossed the finish line at Ironman Louisville exactly five months ago. To say that I’ve been anxious to get that race-day adrenaline going again is an understatement. 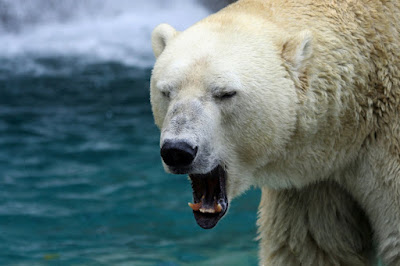 This Sunday I will toe the line for a Sprint distance triathlon in Shelbyville, KY. This is the first of a four-race series that takes place each month through April, this one has been given the name “Polar Bear Triathlon”, for obvious reasons. The races vary in distance, with this month’s being the shortest. It consists of a 3K run, 6 mile bike and 400 yard swim. Forecast for Sunday morning is calling for mostly clear skies with temperatures in the upper 20’s…man that bike is going to be cold!
Those distances were not listed in the wrong order. Due to the outdoor temperatures, the swim is moved from first to last in the race. No one wants to go out into freezing temperatures soaking wet and get on a bike going 20 mph! This would result in lots of hypothermia. I’m pretty sure that a loss of motor skills would make it tough to bike or run.
I’ve never done a triathlon where the run was first and swim was last, so it will be interesting to see what it feels like to get in the water after running and biking.
This will also be the shortest race on the face of the earth that I’ve ever done. With a run a little less than 2 miles, it will pretty much be an all-out sprint. Same on the bike. A six mile bike ride isn’t even enough time to warmed-up. Maybe I’ll just stand and mash the pedals the whole time. The swim is in an indoor 25 yard pool and will consist of “snaking” 8 lengths of the pool. Needless to say, this entire race will be less than 45 minutes and I will be at or near lactate threshold the entire time…completely opposite from Ironman. If Ironman is a marathon, this race would be a 100 meter dash.
With all that said, I’m really excited to get out there and race. With everyone starting at the same time (swim first races will be time trial starts), it will be fun to know what position you are in the whole time…making for some fun head-to-head racing.
I’ve never done this race before, so I’m not sure what I should expect for my time. I’m guessing about 13 minutes for the run, 17 very cold minutes for the bike and 7 minutes for the swim. Add in some time for transitions and I’m thinking I’ll finish somewhere around 38-39 minutes. Last year’s winner finished in just over 34 minutes…don’t think I’m quite that fast!
It’s been a long time since I gathered all of my gear for a race…better print out a list!