The two guys that I trust more than anyone else when it comes to the sport of triathlon are Joe Friel and Ben Greenfield. Both are very accomplished coaches and authors and when it comes to endurance training, I consider them to be two of the best resources available. Both Joe and Ben, through their blog and podcast, have recently discussed a topic that I find very interesting…what is your primary limiter?
There are several theories as to what keeps us from going faster or farther. At some point during a race or hard workout, you will begin to slow down, fatigue, or what some people call “bonk”. You just cannot sustain the effort you want to and your body forces you to reduce your speed or intensity. So why does  this happen? 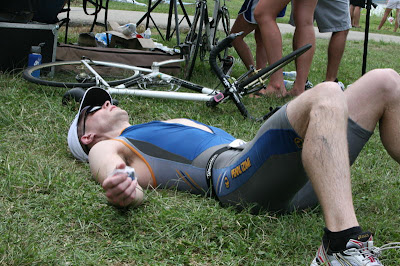 After crossing the finish line at the 2010 Cardinal Harbour Half-Ironman.
The theory that is most common is that exercise stops when something catastrophic occurs to your body. In this theory, fatigue is caused by physiological reasons…like the accumulation of lactic acid in the muscles, or the depletion of glycogen in an endurance athlete. This theory proposes that when these situations occur, the body is physically forced to slow down.
Another theory, which I find more intriguing states that fatigue is physiologically based. This is known as the Central Governor Theory. This theory originated from PhD Tim Noakes and states that fatigue occurs in the brain, not the muscles.
In this theory, the body is constantly sending signals to the subconscious brain regarding the current status of the working muscles. At some point, the brain makes a decision, based on perceived exertion, to slow down. Essentially, this theory says that brain regulates all performance, and will not let you get to catastrophic failure.
Dr. Noakes doesn’t see fatigue as a physical phenomena, but purely as an emotion. When you feel like you have nothing left, it’s just your brain playing a trick on you. Once you understand this, it becomes much easier to push yourself past that point where you want to slow down or quit. Under this theory, you can teach your brain that it can cope with the extra efforts.
So what do I think? I know that the physical training that you do builds your muscles so that they can handle the workload…while also training your body to function at a high level. But I believe that your brain plays a roll that is just as important, if not more, as your physical body.
I know from personal experience, that there have been times during my workouts and races that I was able to dig deep and continue my pace and effort despite being in physical pain. This extra effort that I found came from my brain telling my body that the reward (winning my age group, or setting a PR) was more important than the risk (catastrophic muscle failure).
The more I learn about the Central Governor Theory, the more I try to push through the tough spots in a workout, training my mind to overcome the fatigue. While doing this I think about the old rap song by the Geto Boys, “My Minds” Playing Tricks On Me”. Try it, it works!