Two topics that I love to talk about – politics and food, have a lot more in common than most people realize. I recently listened to a podcast that talked about how the two are intertwined. Author and nutrition professor Marion Nestle was interviewed in the podcast and had a lot of interesting things to say.
Believe it or not, our food intake and food choices are affected by lobbyists. They influence the Federal Government regarding dietary advice that the federal government produces. I get so angry when I see the food pyramid/My Plate or see commercials for the “foods” and drugs that the Food & Drug Administration (FDA) approves regardless of the known risks and side effects. You can thank lobbying for what seems to be ignorance on the part of the government when it comes to health. Lobbying and it’s influences have made it so the Federal Government will never come out and tell the public to stay away from junk food, hormone laced meat or something like diet soda. If you notice, the government never talks about cutting back or eliminating certain foods or even food groups. It’s always something more broad, like a specific nutrient or ingredient (i.e. saturated fat or salt).
So how does this happen? If you know politics, you understand how lobbying works. A lobbyist is a paid individual (or group) that is hired by corporations or organizations to urge politicians to change laws or recommendations in a manor than favors them. Lobbyists are often very well connected in Washington and know how to influence decision makers in a way that is protected by the constitution. They convince the politician that there is nothing wrong or harmful about their product/company.
Using food as an example, a lobbyist for a company that makes food full or lab-created additives might convince a lawmaker that their product is harmless to the public and that the obesity epidemic in this country is due to lack of exercise and that the lab tests showing increases in cancer when these additives are consumed are the result of faulty science. They will basically do whatever they can to convince the right people that consuming their product is not harmful to the general public.
Whatever the Federal Government says, regardless of if it’s a law, affects how and what large food companies make. For instance, the government came out several years ago and recommended that people cut back their sugar intake. Within a few months you began to see “sugar free” or “low sugar” on food labels everywhere. The problem is that when the “sugar” was eliminated, in order to keep the taste the same, companies added artificial sweeteners…all of which are very, very bad for you. So by coming out and saying to lower your sugar consumption, the government actually did the public a disservice. People are still eating the same crap, but now it has cancer-causing chemicals added to it!
The Federal Government also has a hand in how safe our food is. The food industry is very competitive here in the United States. Because there are so many more food choices available here than in the rest of the world, companies have to cut corners to stay competitive and appeal to the latest fad while still keeping production costs low. One of the most common corners to cut is in the safety department, and I’m not talking about worker safety. 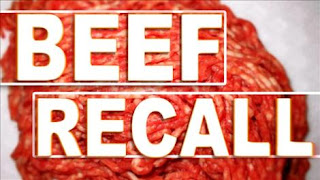 The FDA is in charge of inspecting the food industry and keeping an eye on food processing procedures. The problem is that the FDA is underfunded (because health is very low on the list of priorities) and does not have the man-power to inspect like they should…so most companies handle their own safety and inspections. That’s why we hear of food being recalled all the time. Just think about all the issues that are found that stay in-house! Companies have been busted recalling a product and actually repackaging it.
So what’s the solution?
There’s not an easy one, but like most political issues, it starts at the grassroots level. Do your talking with your wallet. People need to make better choices regarding food. Buying things that are better for you and trying to buy locally is a great way to avoid many of these safety concerns. Farmer’s Markets will be starting back up next month, find one close to you and try to buy all or most of your meats and produce there. It’s better for you and your family.
As for the lobbying issue, this can be helped by trying to elect people that are interested in health and won’t be easily swayed by a slick-talking hired gun.
I know that these issues will not go away, but by educating our children on healthy eating, the next generation will not have to rely on the government to tell them what is a healthy diet!!