Just about every triathlete I know has had a bike fit. Almost all of them have worked with a swim coach to try and shave a few seconds off of their swim times. But very few have ever had their running mechanics reviewed. Why is this? My thought is that most of us have been running in one form or another since were were 2 years old. Maybe not in races (with the exception of Field Day), but we all feel like we know “how to run”. Swimming and biking are more foreign to the typical athlete, so we feel the need to have our form tweaked in those areas. But running does more wear and tear to the body than either biking or swimming, so why not try and become more efficient and prevent injuries while gaining some speed and stamina?
I’ve wanted to have a run gait analysis done for years now. The problem I first ran into was finding someone here locally that had the tools to do it right. Then there was the issue of cost. A good analysis can range from $100 to $500. While I wanted to pull the trigger and get it done, I just couldn’t justify the cost (don’t know why, I’ve spent much more than this on swim coaching and a bike power meter). I finally found Occupational Kinetics and while I was talking with Mike Rowles about having this done, they happen to run a 60% off special – so I was able to have it done for $40! What a steal! 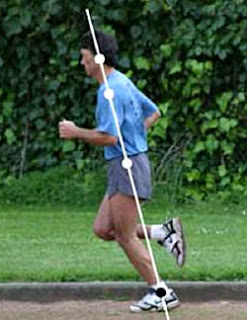 So I’m going to break my analysis down into several parts. First I’m going to look at my forward lean. Leaning slightly forward is something that takes practice. It doesn’t come naturally to most people. Leaning forward to the point where you would start to fall forward if you were not moving is the idea angle. All your legs are doing is stopping you from doing a face-plant. Some people will tell you that if you lean forward “gravity will help you”. I don’t buy this. I’ve taken enough Physics classes in my day to know that gravity provides a vertical force, pulling you towards the earth – there is no horizontal force component to gravity. So it cannot help you run faster in a horizontal direction.
The key to the forward lean is to keep your whole body aligned. Do not just bend at the waist to get your torso leaning forward. The lean should come from your ankles. The proper foot strike (which I will cover in a future post) should be directly under your center of gravity – forming a straight line from your ears to your foot (see picture above). A good angle is at least 5 degrees and the best runners are usually closer to 10 degrees from vertical.
My forward lean is just a little under 6 degrees, so while it could be better, it’s pretty good. 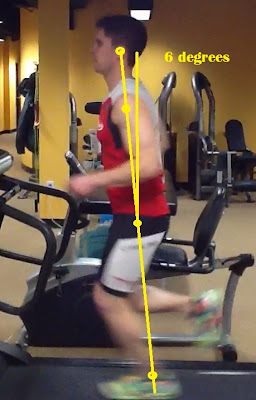 In my next blog post we’ll look at foot strike…warning – it’s about to get ugly!