My previous post addressed forward lean. This one will look into foot strike and the role that it plays in running. Foot-strike is the exact moment when your foot makes contact with the ground.
Even the causal runner has probably heard something about foot strike. The “barefoot/natural” running craze focuses on foot strike as the main culprit of running-related injuries. Depending on what shoe store, physical therapist, or “expert” you talk to, you may be told several different things about what the correct foot-strike location should be…heel, midfoot or forefoot.
I’ve read “Born To Run” and while I agree with some of the principles talked about in this book, I also believe that while shoes play an important role in foot-strike, you can land on your midfoot or forefoot even if you are wearing a “stability” shoe.
If you start to look at studies over the last 20 years it becomes quite humorous. Up until the last 5-7 years, all of the studies concluded that heel-striking was the most effective technique. Now almost everything you see will tell you the opposite, that heel-strike is horrible for a runner’s speed and longevity.
If you watch video or still photos of elite runners, you will see some that heel-strike…especially in longer races like a marathon. If you watch sprint races, like you probably did in the 2012 Summer Olympics, these runners are all forefoot strikers. So depending on the runner and the distance, there really is no consensus on the correct way for your foot to contact the ground. Furthermore, trying to change your foot-strike is not as easy as you may think and must be done with caution.
Based on everything that I have read and heard, it’s more important where your foot strikes the ground in relation to your body than how your foot strikes the ground.
When your foot lands out in front of your body, you’re adding a resistance to your forward momentum (back to Physics class). Combining this landing position with a heel strike often means that your leg is straight and your knee is locked out. This transfers a lot of force and pressure all the way up your leg to your hips…which will eventually lead to injuries.
If your foot lands under your body, even with a heel strike, it reduces the resistance to your forward movement and your bent knee is better able to absorb the forces created when you land.
So let’s look at a few examples. First is a sequence if images of elite marathon runner Ryan Hall. The three frames show how and where is foot strikes the ground. The image on the far right is the exact moment his weight is transferred to his foot and is what I would consider a good landing position – directly under the body:

Now let’s look at another elite marathoner, Meb Keflezighi, from the same race. The three frames are from the same place in Meb’s stride as Ryan’s above. You can see that Meb is a heel-striker…BUT this is not a problem because his knee is bent and his weight transfer is under his body:

This big different between my heel-strike and Meb’s is that my leg is locked when my heel makes contact with the ground. There are lots of other reasons why his form is more efficient, but we’ll just focus on foot-strike for now.
So what is the take away from this? It’s important to land effectively when running. Keep your knees loose and focus on landing under your center of gravity. If you can look down while running and see your foot when it hits the ground, you are not landing under your body.
Since this analysis was done almost a month ago, I’ve been getting back to doing some drills and running barefoot. I found a nice soccer field close to my house and I’m trying to get over there at least once a week. The goal is to train my muscles to run so that I land under my body with a relaxed knee, not out in front. The frustrating part was that I did a lot of these same drills and barefoot running last spring/summer and was able to change my foot-strike for the better. But apparently, after taking 4-5 months off from drills and running on grass, I are reverted back to my old habits. Here are a few pictures taken of me at the very end of races last year, when my form was falling apart…but notice the impending midfoot strike and bent knee. With a little work, I’ll get this back. 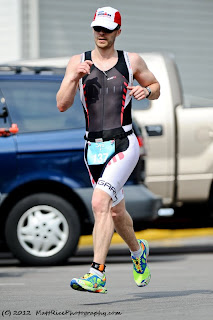 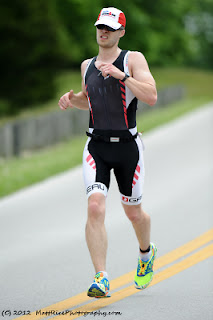