Forecast all week long called for rain overnight Saturday turning into snow Sunday morning. I never trust forecasts! I woke up Sunday morning and immediately got on the computer to check the radar. Since I do all almost all of my running outside year-round, I like to think that I’m pretty good at reading a weather radar. I was not happy to see a line of green/pink/blue heading towards Shelbyville. This indicates a mixture of rain, freezing rain/sleet and snow. The air temperature was right around freezing, so this all made sense. I also saw that the radar indicated that it was currently raining in Louisville…which a quick glace outside refuted. So I surmised that the precipitation must be evaporating before reaching the ground. See, I sound like I know what I’m talking about with all the big words, huh?
Turns out that not a single drop of rain or a snowflake had fallen overnight in Shelbyville or would fall during the race. This is a prime example as to why I never trust an extended forecast.
As usual, I had packed up all of my gear the night before. So I woke up Sunday morning and downed a sweet potato with some almond butter (my new standard pre-race meal). I loaded everything into the car and headed out.
I had some problems coming out of T1 last year and during the first race of this year. I have my shoes already clipped in to my pedals and then slip my feet in them once I get going. The problem that I’ve had is that one or both of my shoes would flip over while I was trying to get my foot in. The shoe would then hit the ground and would make it necessary to stop the bike and get it flipped back over. This has cost me precious seconds enough times that I was determined to get it right this race. I was early enough that I had time to stop in to Walmart in Shelbyville to get some rubber bands. The ones that I had used before to keep my pedals horizontal (see example below) were too short and would break as soon as I moved the pedal. So I found some longer ones and they did the trick. No problems coming out of T1 this time! 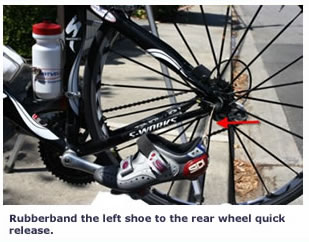